A Ukrainian soldier carries a baby across a destroyed bridge on the outskirts of Kyiv (Picture: Timothy Fadek/ Redux/ Eyevine)

Heartbreaking photos show the scale of devastation faced by people fleeing from the city of Irpin, near Kyiv.

A brave Ukrainian soldier has been pictured clasping a newborn baby as he crosses a destroyed bridge.

The photo was taken in Irpin, a suburb northwest of the Ukrainian capital that has been ransacked by shelling and attacks.

Photographer Timothy Fadek confirmed on Twitter that the baby was alive, adding: ‘the parents are behind him still crossing the bridge, he carried the baby because the parents also had bags to carry.’

Those fleeing the city by foot have been hampered by the destroyed bridge with many forced to take a small, makeshift bridge out the city.

The bridge, which connects Irpin and Kyiv, was blown up by Ukranian forces in a bid to block invading Russian troops. 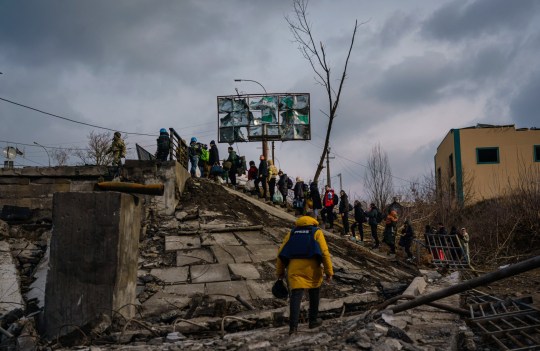 Civilians cross the Irpin river through the rubble of the destroyed bridge to escape the fighting (Picture: Shutterstock) 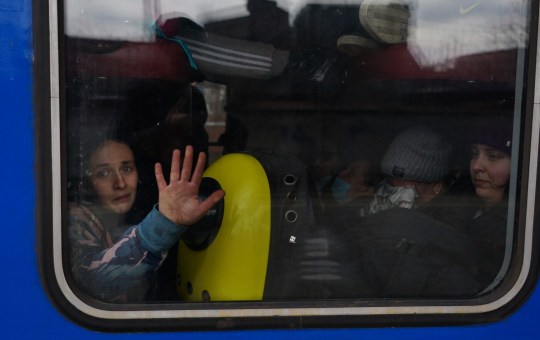 Civilians, mostly women and children rushed to board any train car that had room on Friday (Picture: Shutterstock) 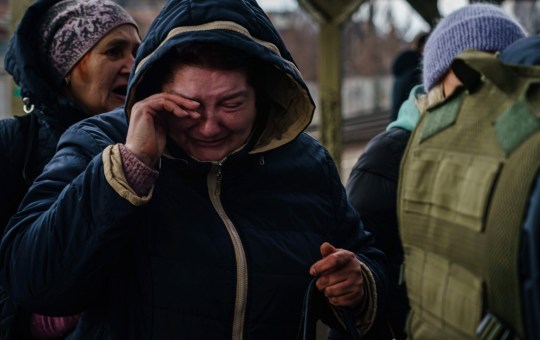 A woman breaks down in tears as she realizes she is getting to board an evacuating train (Picture: Shuttershock)

And there was chaos at the town’s train station yesterday as people desperately piled upon busy carriages.

The train was filled almost entirely with women and children, as all men between the ages of 18 and 60 have been ordered to stay behind and aid the war effort.

Today, crowds of Ukranians sheltered under a destroyed bridge as they tried to flee crossing the Irpin river.

They were aided by soldiers in reaching safety on the other side.

Dramatic photos show people squeezed under what is left standing of the bridge. 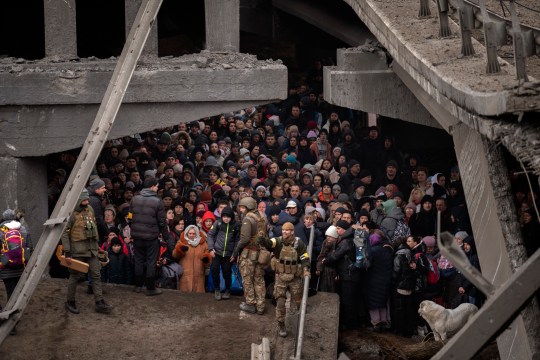 The crowds beneath the bridge today were guarded by soldiers (Picture: AP) 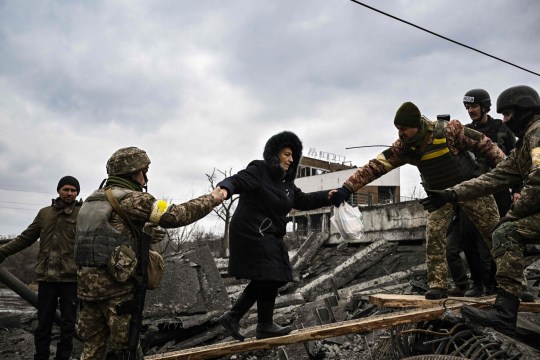 According to the UN, over 1.2million people have fled Ukraine to neighbouring countries since Vladimir Putin launched his invasion February 24.

The evacuation of Irpin comes as Russian have been accused of ignoring the terms of a ceasefire which was meant to come into force for two cities today.

The city council of Ukraine’s Mariupol city said Russian forces were not observing an agreed ceasefire along the whole length of a planned route for the evacuation of civilians that was due to take place today.