A DRUGGED up joiner led police on a dangerous bike chase with a CHILD sitting on his LAP.

Unemployed Christopher Stainer, 27, was seen riding a mini-moto next to a playground with neither him or the child wearing helmets or protective clothing.

Drugged-up Christopher Stanier was caught on camera riding a mini-motowith a child on his lapCredit: BPM Media

A police chase to catch the drugged up joiner ensuedCredit: BPM Media 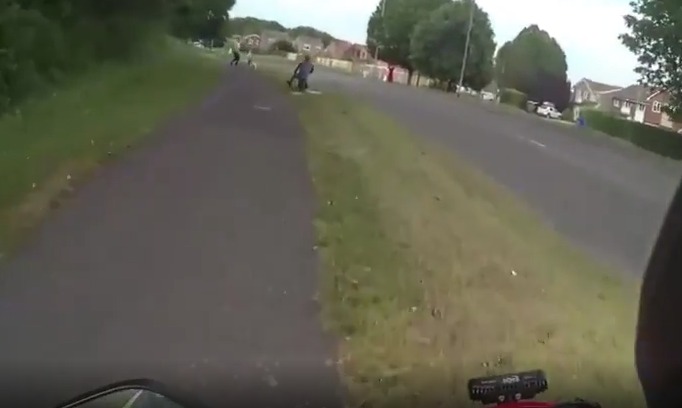 Stanier was chased across fields by a police motorcyclistCredit: BPM Media

Staffordshire Police had deployed a plane to catch off-road bikers when it spotted Stanier and the child from mid-air in Abbey Lane, Abbey Hulton, at 5.45pm on June 14 last year.

After he was seen dropping the child into a van in the Fellbrook Way and Werrington Road area of Bucknall, Stanier fled from officers across roads and pavements.

But he was chased through fields by a police motorcyclist before eventually being caught.

However, a test revealed Stanier was over the cannabis drug-driving limit.

He was slapped with an 18-month driving ban at North Staffordshire Justice
Centre for the dangerous pursuit.

Prosecuting, Alicia Perry said: “The officer activated blue lights
requiring the rider to stop. But he turned into the Give Way junction
at Ruxley Road without looking.

“He showed no concern for other road users. Due to concerns the police dropped back.”

She added: “An officer on a motorbike was directed to a footbridge over the A50 and he waited.

Staffordshire police constable Craig Beardsley, from the force’s road policing unit, “He was over the legal limit for cannabis and put himself and the child at a great risk of serious injury. Fortunately, no-one was hurt.”

“We are acutely aware of the impact nuisance motorcyclists have on our
communities across Stoke-on-Trent and we are doing all we can to limit
the alarm and distress to local residents,” he added