Shocking footage from Ukraine shows explosions at the Nova Kakhovka dam on the Dnipro River as Russians fleeing Kherson seek to flood the area.

A black and white video uploaded onto the website of pro-war Russian newspaper Izvestia captures the moment a huge blast hits the dam, causing massive damage but failing to destroy the banks.

In the footage, the dam appears to be operating as normal when the area is suddenly engulfed by a blast and a sudden blinding flash of light, which causes the video to freeze for a moment.

When it resumes, debris can be seen falling from the sky and thick plumes of smoke fill the air as the area is engulfed by flames.

According to Izveestia, Russian soldiers claimed to have blown up a section of road running across the dam in an apparent attempt to slow the Ukrainian advance as they fled the region but denied responsibility for the explosion.

Speaking of the damage, Pro-Russian war blogger Colonel Cassad took to Telegram and said: ‘Damage to the dam of the [Nova Kakhovka] hydropower plant.

‘So far, there is not enough damage for a large flood, but in the course of subsequent hostilities, it cannot be ruled out that it will be [finished off].’ 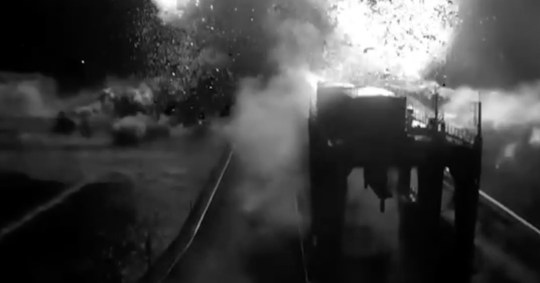 An enormous explosion at the Nova Kakhovka dam near Kherson was captured on CCTV (Picture: East2West)

‘Satellite images this morning … reveal significant new damage to several bridges and the Nova Kakhovka dam in the aftermath of the Russian retreat from Kherson across the Dnipro river,’ Maxar said in a statement.

Russia has repeatedly sought to implicate Ukraine in causing damage to the dam, despite citing no evidence.

Earlier this week, Russian media attempted to blame Ukraine for shelling at the dam, claiming that a rocket launched by a U.S.-made HIMARS missile system had hit the dam’s lock and caused damage. 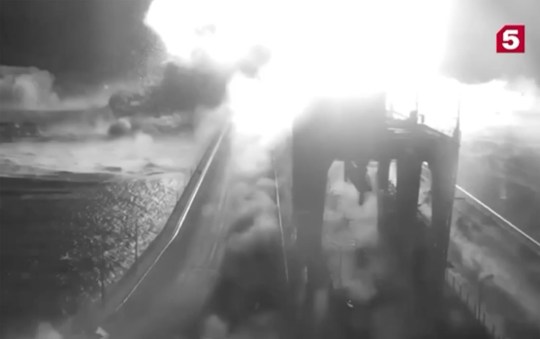 Both Russia and Ukraine have blamed eachother for the attack, which could flood the entire region and cause major destruction to the city (Picture: East2West)

According to the Russians, Ukraine wants to destroy its own infrastructure so it can ‘create the conditions for a humanitarian catastrophe’ and blame Russia for the damage.

The vast Nova Kakhovka dam, which blocks the Dnipro river upstream of Kherson where Ukrainian forces have been making advances, has taken on vital strategic significance in recent weeks.

Both Russia and Ukraine have since October repeatedly accused each of planning to breach the dam using explosives, in a move that would flood much of the area downstream in what would likely cause major destruction around Kherson city.

This week over 30,000 Russian soldiers retreated from the city of Kherson and set up a new line of defence on the left bank of the Dnipro River after the Russian Ministry of Defence admitted it had become too difficult to supply them.

Kherson was one of four territories illegally annexed by Moscow and a major Russian stronghold in Ukraine, and its liberation by the Armed Forces of Ukraine has been hailed as a major victory.

Following the reclaiming of the city, President Zelensky said in his nightly address: ‘Today is a historic day. We are regaining the south of our country, regaining Kherson.

‘I am happy to see how people, despite all the threats, despite the repression and abuse of the occupiers, cherished the Ukrainian flags, believed in Ukraine.

‘And even when the city is not yet completely cleansed of the enemy’s presence, the people of Kherson themselves are already removing Russian symbols and any traces of the occupiers’ stay in Kherson from the streets and buildings.

‘It was the same in all other cities liberated by our defenders. It will be the same in those cities that are still waiting for our return. Ukraine will come to all its people.’