Nearly nine out of 10 people in the UK want self-driving vehicles to be clearly labelled (Picture: AP)

It looks like UK residents aren’t entirely on board with the idea of sharing the roads with self-driving cars.

Researchers surveyed 4,860 members of the British public in late 2021 about their attitudes to self-driving vehicles.

Public distrust for driverless vehicles seems to be related to fears over safety.

While 58% of the people surveyed were uncomfortable using self-driving vehicles, 55% of them did not feel safe sharing the road with them. This level of discomfort hasn’t really shifted in the past five years of public surveys.

‘Self-driving vehicles are often hyped as heralding a new transport revolution but there’s still a huge amount that needs to be worked out,’ said Professor Jack Stilgoe, of University College London, who led the research.

Nearly nine out of 10 people in the UK want self-driving vehicles to be clearly labelled so they can be easily distinguished from human-driven ones, according to the report.

‘In the case of labels – at the moment it’s basically the wild west. Companies can do whatever they like, although some have chosen to chosen to write self-driving vehicle on the back of their car,’ said Stilgoe.

‘Whether these things look much like L-plates, or flashing lights or whatever, still needs to be worked out.’ 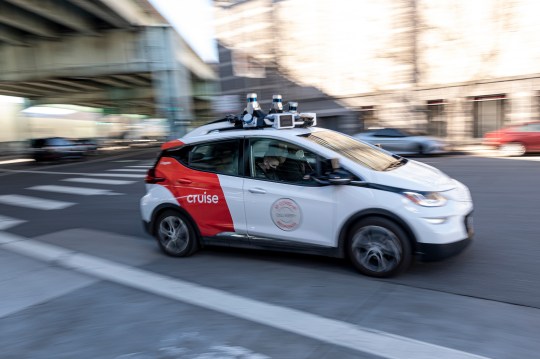 Meanwhile, 92% agreed that in the event of a collision ‘all data must be made available to investigators’ which is currently not the case with self-driving vehicle companies.

US respondents were slightly more in favour of self-driving vehicles, probably owing to the rollout of driverless vehicles in cities like San Francisco. Last month, a driverless car belonging to Cruise had a run-in with the police.

In the UK, driverless vehicles are only allowed with special permission for scientific research.

Wayve, a London-based autonomous startup, is currently trialling driverless vehicles across the UK in a number of pilots, including with Ocado and Asda.

Among the other findings, the survey highlighted that the UK public preferred self-driving public transport over driverless vehicles for personal use.

Self driving cars are still seen as out of reach for the general public with only 13% agreeing that poor people would benefit more from the technology than rich people.

The survey was part of a three-year project, titled ‘Driverless Futures?’, which involved researchers from UCL, UWE Bristol and City, University of London and was funded by the UK Economic and Social Research Council.