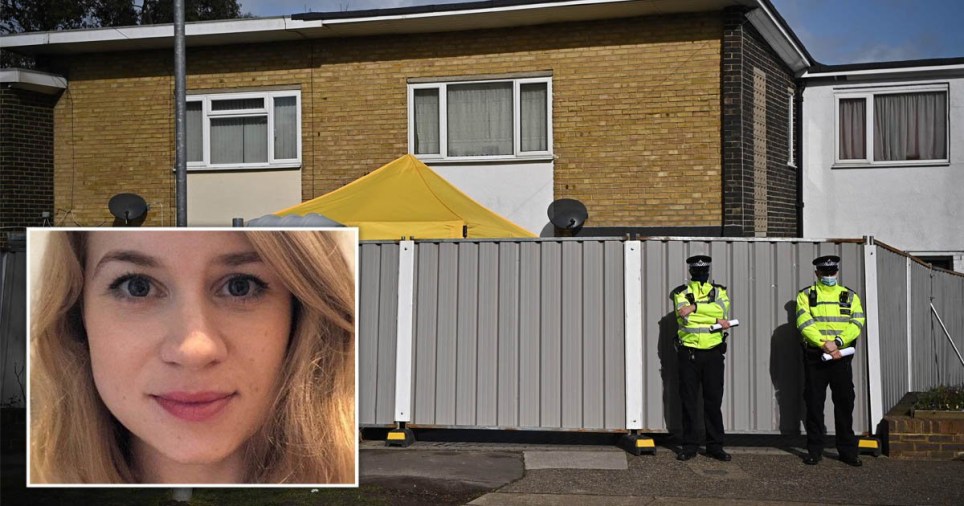 It is understood footage from passing vehicles helped lead to an arrest (Picture: Getty)

Detectives investigating the disappearance of Sarah Everard uncovered crucial evidence by looking at CCTV footage from a London bus, it has been reported.

The 33-year-old marketing executive went missing on March 3 as she was walking from a friend’s in Clapham to her home in Brixton – a journey that should have taken around 50 minutes.

She was last captured on a doorbell camera walking along the A205 Poynders Road towards Tulse Hill at around 9.30pm.

She spoke to her boyfriend, Josh Lowth, and arranged to meet him the following day, but after not hearing from her he became worried and raised the alarm.

It is not known how close Ms Everard got to her home, but officers are understood to have had a breakthrough after trawling through CCTV from buses running through the A205.

This, along with a driver’s dashcam footage which picked up a car linked to the disappearance, is thought to have led to the arrest of Metropolitan Police officer PC Wayne Couzens, 48.

He was arrested at his home in Deal, Kent, late on Tuesday night and is now being treated as a murder suspect. 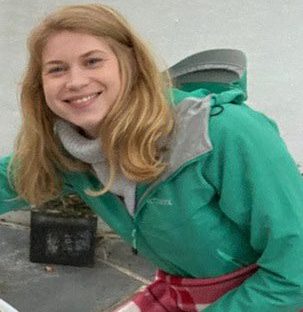 Sarah Everard left her friend’s home in Clapham at around 9pm on March 3 (Picture: Met Police/AFP/Getty) 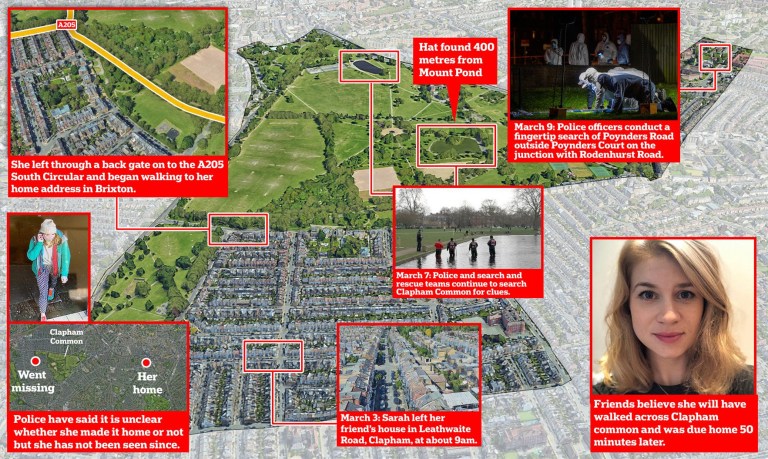 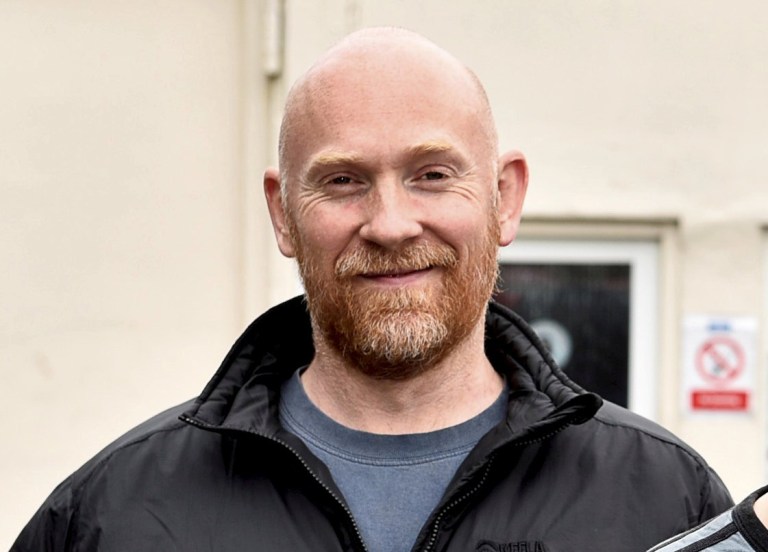 It is understood the married father-of-two worked a 2pm to 8pm relief shift at the US Embassy in Nine Elms, south-west London, on the day of Sarah’s disappearance. He was off-duty during the time she was last seen.

A woman in her 30s, said to be the arrested officer’s wife, was also taken into custody on suspicion of assisting an offender.

Last night Metropolitan Police commissioner Dame Cressida Dick announced that ‘human remains’ had been found in an area of woodland in Ashford, Kent, but that it was too early to identify to whom they belonged.

Ms Everard’s uncle said she did not know Couzens and the family have no idea how or why he was linked to the disappearance.

Nick Everard, 62, from Coventry, told the Sun: ‘She would never have taken a lift with a stranger.

‘She was sensible. She didn’t know him and she wouldn’t have voluntarily got into a car. I’m trying to work out what has happened.

‘I don’t know that area but I keep looking at a map of Clapham Common to see which route she took.

‘I’ve got to talk to my brother. This is the worst news. I want to find out all about this man. He’s got two children for God’s sake.’ 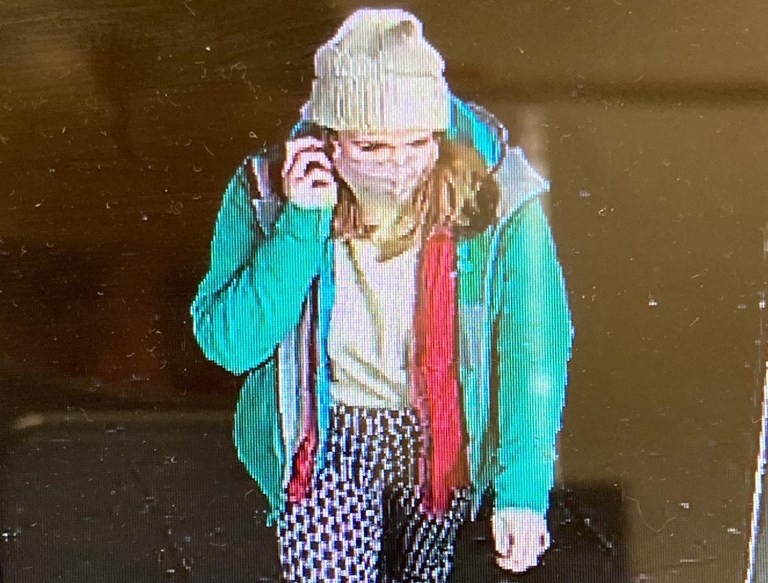 CCTV shows Ms Everard walking along the A205 Poynders Road, from the junction with Cavendish Road, in the direction of Tulse Hill, south London (Picture: AFP/Getty Images) 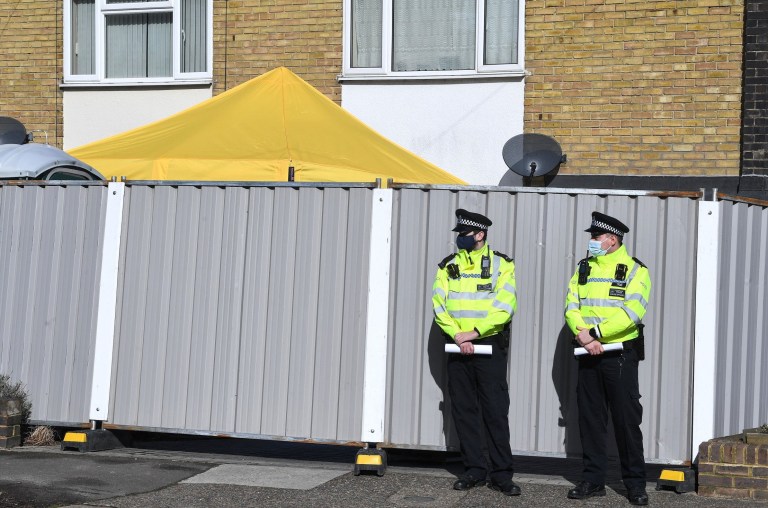 Police officers stand by a temporary barrier outside a house in Deal, Kent (Picture: REX)

Earlier today it emerged Couzens, 48, was taken to hospital after being found unconscious in his cell.

There is no suggestion anyone else was involved and he has since been discharged from hospital and returned to custody, according to the Sun.

In a statement released this evening, Ms Everard’s family paid tribute to their ‘wonderful daughter and sister’.

They said: ‘She was kind and thoughtful, caring and dependable. She always put others first and had the most amazing sense of humour.

‘She was strong and principled and a shining example to us all. We are very proud of her and she brought so much joy to our lives.’