SAINSBURY’S has been branded “utterly offensive” for selling “strip club” style t-shirts for girls as young as seven.

The black tops are emblazoned with a “GIRLS GIRLS GIRLS” pink neon sign like ones found outside seedy bars. 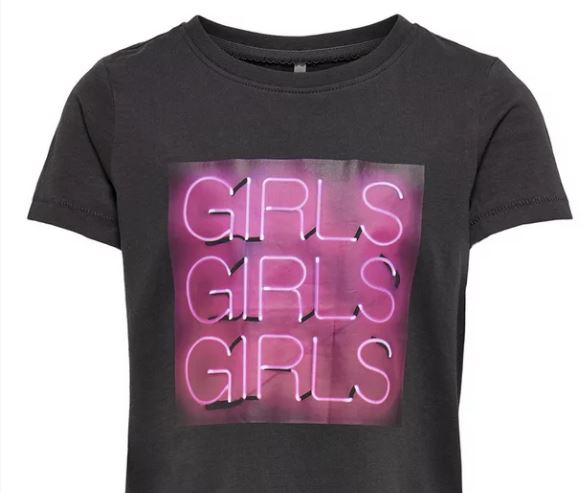 The infamous signs are synonymous with red light districts and have flashed in the windows of sex haunts in Amsterdam, Los Angeles’ Sunset Strip and even London’s Soho.

But now children can walk around wearing the sign on their chests.

“It’s the kind you see in films outside of strip clubs to portray a seedy area of a city. What message is this sending to society? Not cool Sainsbury’s!”

Another wrote: “Are you seriously selling this? The design has obvious associations. And to put it on a top for 7-13 year old girls?!! It is utterly offensive.”

The t-shirts have been slammed

Another posted on Twitter: “Is it just me who thinks this kids T-shirt currently available in Sainsbury’s is highly inappropriate? A sign usually seen outside strip clubs!”

One fellow parent replied: “Ewww!” The cotton T-shirts, from Sainsbury’s Tu clothing range, are aimed for children aged seven to 13.

They cost £15 and the supermarket describes them as “perfect for little trendsetters”.

A product description reads: “Fresh from the ONLY Kids collection, this funky black t-shirt is perfect for little trendsetters.

“With a crew neck and short sleeves, it comes in pure organic cotton, has a cool neon pink ‘Girls, Girls, Girls’ graphic and is perfect teamed with classic jeans.”

The song referenced a several sex clubs, while its music video was shot at The Seventh Veil strip club on the Sunset Strip.

Line of Duty: What has Kelly Macdonald been in as BBC drama returns?