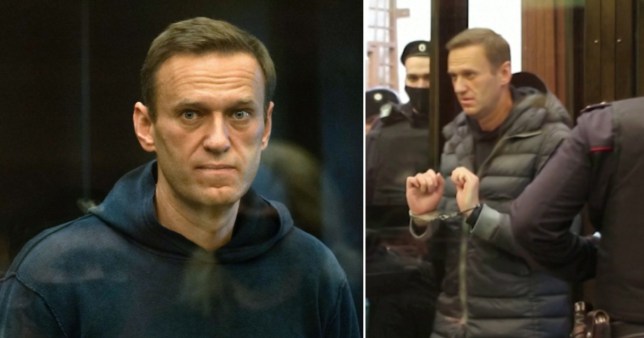 The Kremlin critic has been sentenced to two years and eight months (Picture: Getty)

A Moscow court has jailed Russian’s opposition leader on charges that he violated his probation while recovering in Germany from nerve-agent poisoning.

Alexei Navalny, 44, who has been in detention since returning from Berlin last month, has been sentenced to two years and eight months behind bars.

The sentence of the most prominent critic of President Vladimir Putin stems from a 2014 embezzlement conviction that Mr Navalny has rejected as fabricated.

The UK has demanded the ‘immediate and unconditional release’ of Mr Navalny, as well as journalists and ‘peaceful protesters’ who were arrested over the last two weeks for taking to the streets to support him.

Foreign Secretary Dominic Raab said: ‘Today’s perverse ruling, targeting the victim of a poisoning rather than those responsible, shows Russia is failing to meet the most basic commitments expected of any responsible member of the international community.’

The UK added it believes there is ‘no plausible explanation for Mr Navalny’s poisoning, other than Russian involvement and responsibility’.

Mr Navalny was arrested on January 17 after returning from Berlin, where he spent five months recovering from the poisoning he has blamed on the Kremlin. Russian officials have denied their involvement. 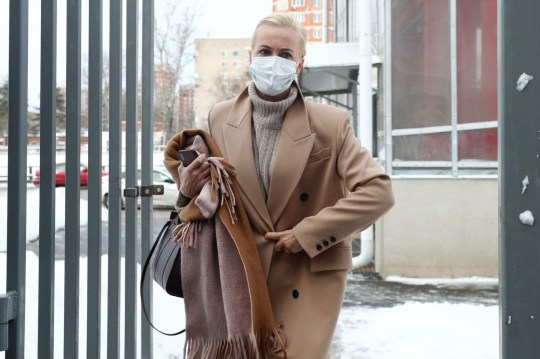 As Mr Navalny’s sentence was read today, he pointed to his wife Yulia in the courtroom and traced the outline of a heart on the glass cage where he was being held.

He told his wife: ‘Don’t be sad, everything will be fine’, according to local media.

Navalny earlier attributed his arrest to Mr Putin’s ‘fear and hatred’, saying the Russian president will go down in history as a ‘poisoner.’

‘I have deeply offended him simply by surviving the assassination attempt that he ordered,’ he said.

‘The aim of that hearing is to scare a great number of people,’ Navalny said. ‘You can’t jail the entire country.’

More than 320 of his supporters were arrested outside the court today, following a wave of protests across the country over the past fortnight demanding his release. 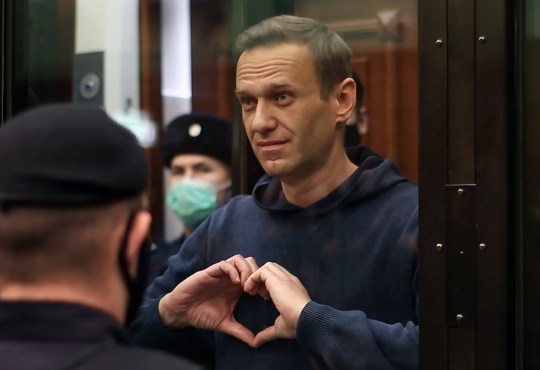 Mr Navalny made a heart gesture to his wife before he was taken away (Picture: TASS) 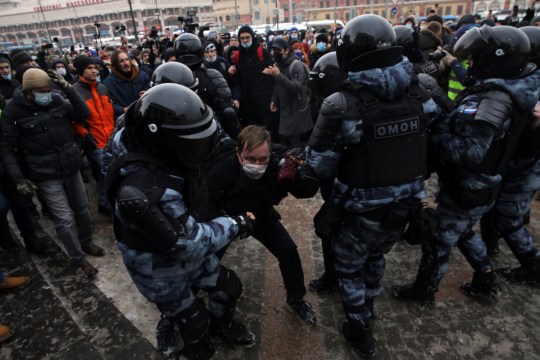 Police have been criticised for using excess force during the protests (Picture: Getty)

Russia’s penitentiary service alleges that Navalny violated the probation conditions of his suspended sentence from a money laundering conviction.

It asked the Simonovsky District Court to turn his three-and-a-half year suspended sentence into one that he must serve in prison – though he has spent some of that sentence under house arrest.

Mr Navalny also pointed out that the European Court of Human Rights ruled that his 2014 conviction was unlawful and Russia paid him compensation in line with the ruling.

His lawyers argued that while he was recovering in Germany from the poisoning, he couldn’t register with Russian authorities in person as required by his probation. 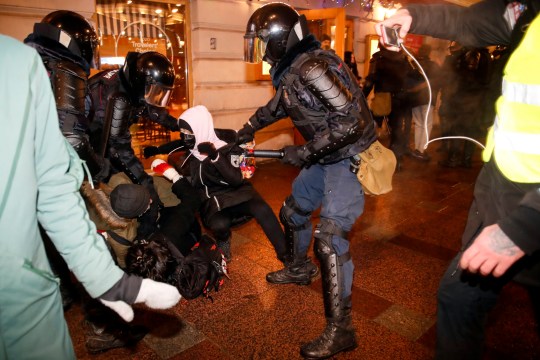 Mr Navalny also insisted that his due process rights were crudely violated during his arrest and described his jailing as a travesty of justice.

He told Tuesday’s hearing: ‘I came back to Moscow after I completed the course of treatment. What else could I have done?’

The opposition leader’s detention triggered mass protests across Russia, with tens of thousands taking to the streets in support – with some even heading out in -41C temperatures.

Police arrested over 5,750 people on Sunday, including more than 1,900 in Moscow, the biggest number the nation has seen since Soviet times.

Mr Navalny’s team called for another demonstration Tuesday outside the Moscow courthouse. Although police were out in force cordoning off areas, some supporters still managed to approach the building. 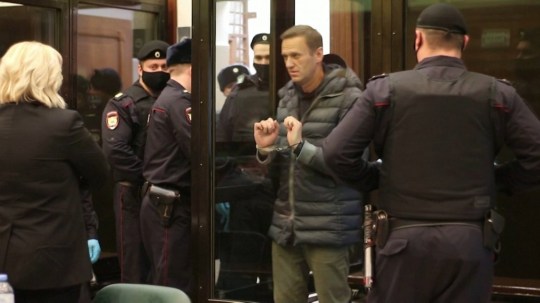 A young woman climbed a large pile of snow across the street from the courthouse and held up a poster saying ‘Freedom to Navalny.’ Less than a minute later, a police officer took her away.

In court, Mr Navalny thanked protesters for their courage and urged other Russians not to fear repression.

He said: ‘Millions can’t be jailed. You have stolen people’s future and you are now trying to scare them. I’m urging all not to be afraid.’