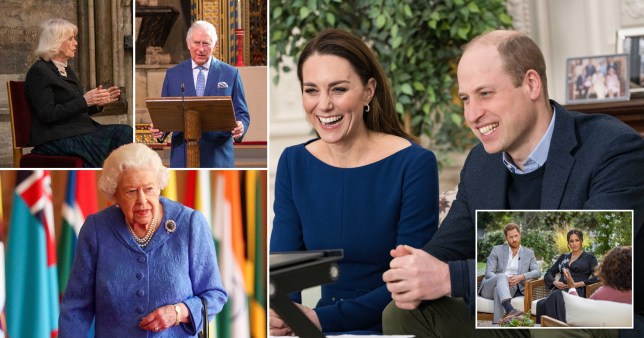 They will appear in a BBC show celebrating the Commonwealth (Picture: PA/Harpo Productions)

The Royal Family will put on a united front to celebrate the Commonwealth ahead of Meghan and Harry’s bombshell interview with Oprah Winfrey on Sunday.

Kate Middleton will hail the ‘amazing work’ of NHS staff and key workers during the Covid-19 crisis, and say it is ‘sad, almost’ that it took the pandemic for people to ‘really back and support all those working on the front line’.

Her comments are part of a BBC programme featuring the royals set to air hours before the Duke and Duchess of Sussex’s tell-all is broadcast.

Prince Charles will also pay tribute to the ‘extraordinary determination, courage and creativity’ of the Commonwealth’s people during the Covid crisis.

In extracts released over the last few days, Meghan has criticised the constraints she faced as a working royal, and said it was ‘liberating’ to be able to ‘say yes’ to a request for an interview with the US chat show host.

She accused ‘The Firm’ – as the royal family is sometimes known – of ‘perpetuating falsehoods’ about her and Harry.

The wider royal family – including the Queen, the Prince of Wales, the Duchess of Cornwall and the Countess of Wessex – will appear in the BBC show called A Celebration For Commonwealth Day. 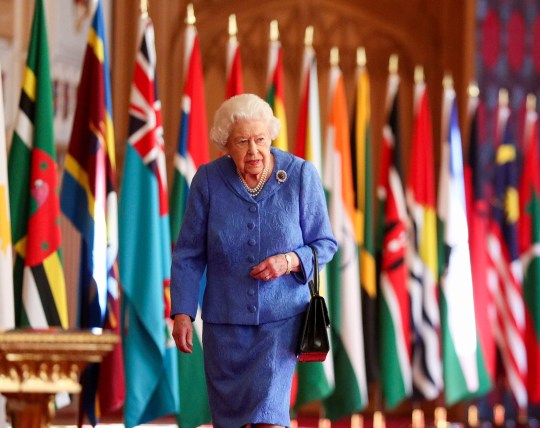 In an extract from the programme, Kate and William chat in a video call with Dr Zolelwa Sifumba, from South Africa, an advocate for the rights of healthcare workers on the front line.

The duchess tells the medic: ‘Here in the UK there’s been masses of public recognition of the amazing work the front line are doing and it’s sad, almost, that it’s taken the pandemic for the public to really back and support all those working on the front line.’

William, Kate and their children were pictured last year joining in the weekly applause for frontline workers during the early part of the pandemic. 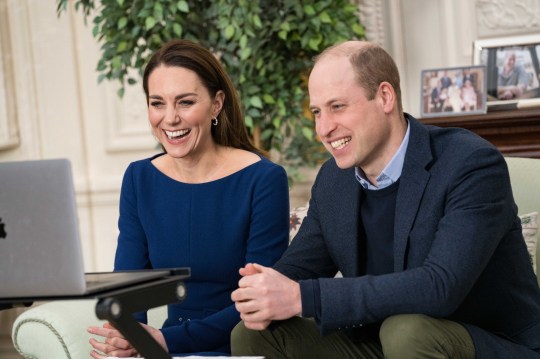 The Duke and Duchess of Cambridge during their virtual engagement (Picture: PA)

‘If their child needs looking after offer, you know, if they need a meal, offer.’ 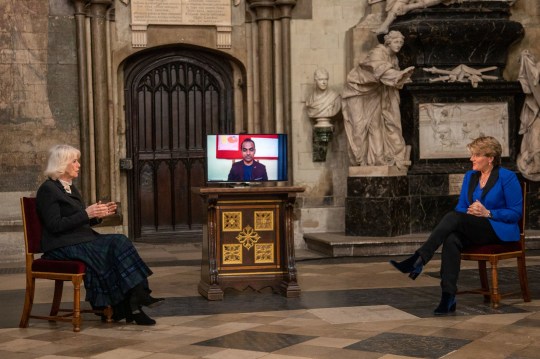 William says: ‘We, Catherine and I, have spoken to a lot of healthcare workers in UK and around the world over the last year – we hear your worries and your concerns and thank you for your time chatting to us about it.’

It was at last year’s Commonwealth Day service when the Sussexes were last seen with their family, sitting close to the Queen, Charles, Camilla and William and Kate.

A few months before that they had sent shockwaves through the monarchy by announcing they would be stepping down as working royals.

Speaking from Westminster Abbey, where he was last seen publicly with Meghan and Harry, Prince Charles says during the programme that the pandemic and climate change are ‘existential threats’ which have no borders. 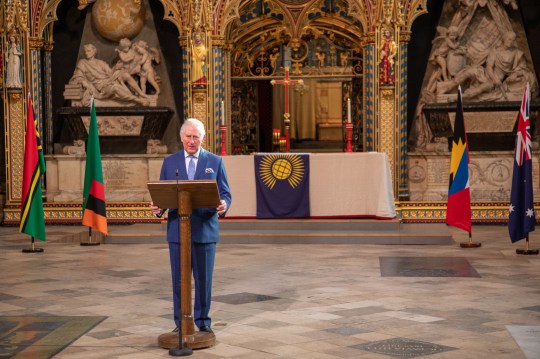 He adds: ‘The coronavirus pandemic has affected every country of the Commonwealth, cruelly robbing countless people of their lives and livelihoods, disrupting our societies and denying us the human connections which we so dearly cherish.

‘Amidst such heart-breaking suffering, however, the extraordinary determination, courage and creativity with which people have responded has been an inspiration to us all.

‘This pandemic has shown us the true nature of a global emergency. We have learned that human health, economic health and planetary health are fundamentally interconnected and that pandemics, climate change and biodiversity loss are existential threats which know no borders.’

Camilla is featured speaking to broadcaster Clare Balding about how her interest in books was inspired by her father Major Bruce Shand’s love for literature.

The duchess says: ‘I’ve always had a passion for books. Books have been part of my life for so long. I started reading when I was very very young with a father who has a fervent bibliophile.

‘So from the age of two or three he used to sit and read to us children, take us on wonderful adventures… all over the world.’

The piece was recorded at Westminster Abbey’s Poets’ Corner and the pair were joined by videolink by award-winning teacher Ranjitsinh Disale.

Camilla says: ‘I think I was bitten at that age and from then I’ve just kept going, and I’ve got involved in a lot of literacy programmes and patronages. I just feel very strongly that all children should be taught to read.’

Sophie marked Commonwealth Day and International Women’s Day, which are both celebrated on Monday, by speaking by videolink to three women from around the Commonwealth, to hear about their experiences of supporting other women and their wider communities.