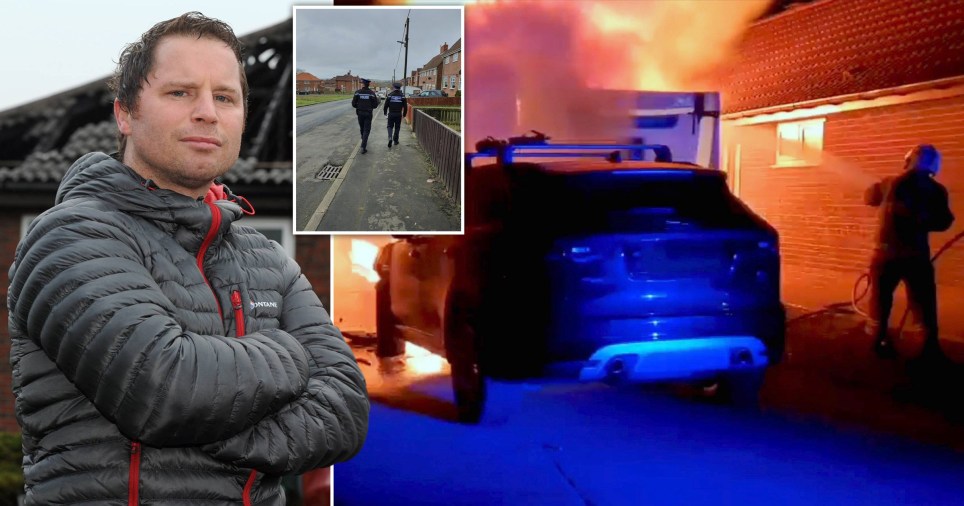 A former Royal Marine who spoke out against anti-social behaviour in his village has had his bungalow torched for a second time in the space of a week.

Teacher Sean Ivey, 38, said he, his wife and their two children aged seven and five were ‘almost murdered’ when their home in Wingate, County Durham, was set alight as they slept on Wednesday.

Durham Police arrested a 22-year-old man on suspicion of arson the following day before confirming a second blaze at the property in the early hours of Friday morning was similarly thought to be deliberate.

A second man, aged 25, was arrested on suspicion of arson later yesterday.

Mr Ivey shared a video of his car and caravan ablaze during the incident, which also showed a fire crew attending.

The fire spread to his home, which was not insured because he had forgotten to renew the policy.

Mr Ivey, who grew up in Wingate and returned there after serving in the Marines, said his home had been targeted because he had spoken out after a series of yobbish incidents in the former pit village.

In a Facebook post after the initial fire, he said: ‘We’re good standing members of the community and now, because I spoke out against anti-social behaviour my five-year-old boy, seven-year-old girl, wife and myself were almost murdered whilst asleep. 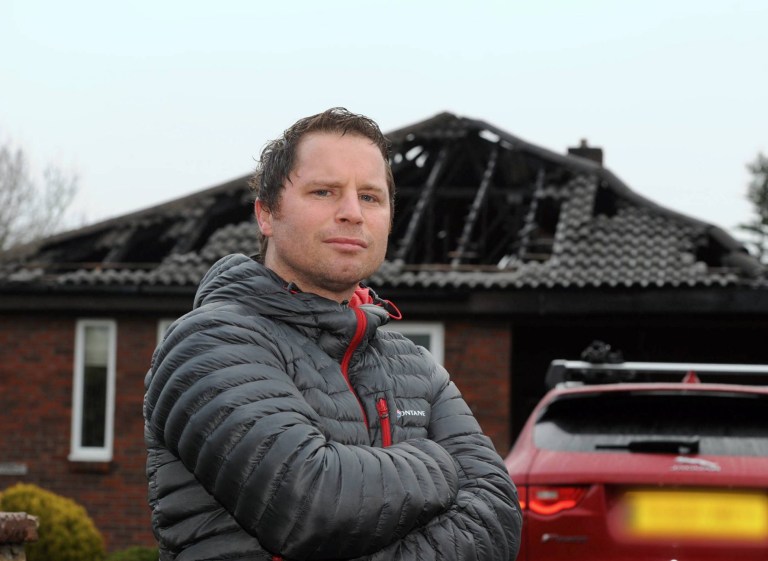 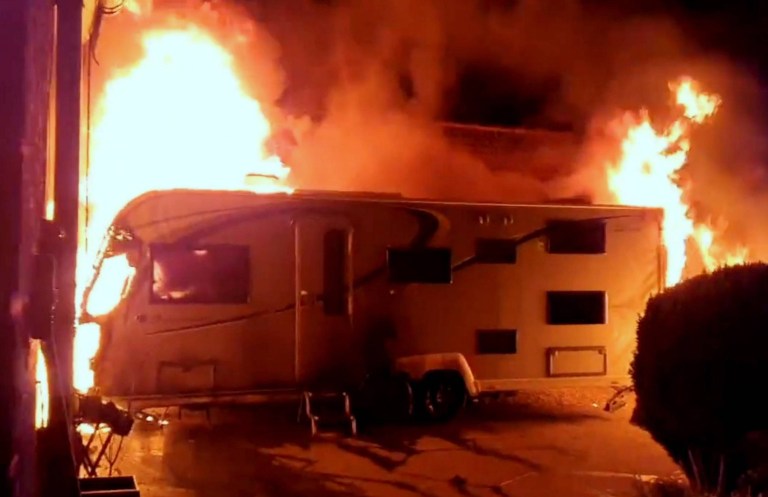 Mr Ivey shared a video of his car and caravan ablaze (Picture: North News and Pictures) 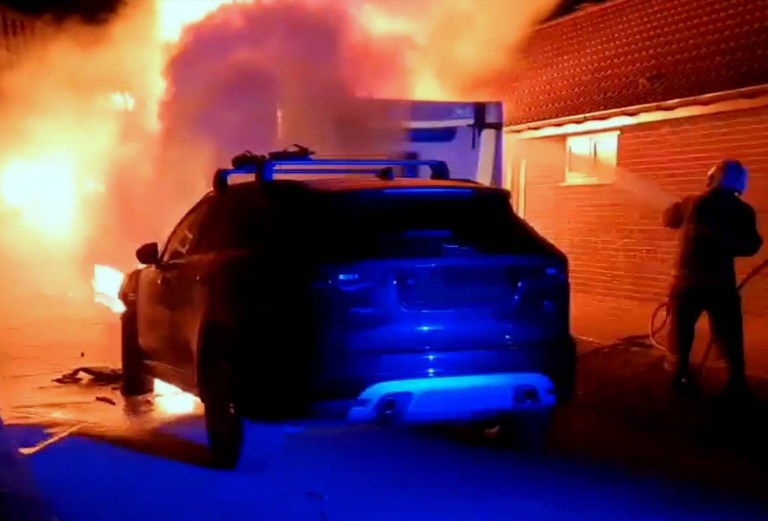 The home was targeted twice in the space of a week (Picture: North News and Pictures)

‘I want people to know that not enough is being done to curb anti-social behaviour.

‘People are not being held accountable or responsible.

‘Help me to help you and everyone else who are becoming victims of the poison that lives in our local communities.’

On Wednesday, hours before the arson attack, Mr Ivey posted on social media that his parents had been robbed when four men burst into their home.

He also said he had a run-in at the weekend with a young biker ‘riding like a lunatic’ and saw another in the main street of the former mining village pulling wheelies and mounting the paths.

He wrote: ‘Something really has to change!!!

‘I don’t know how and I do not know what we can do but I think it’s time that the people, the good people of our communities, got together and come up with some ideas to hopefully get rid of these thugs and clean up our streets.’ 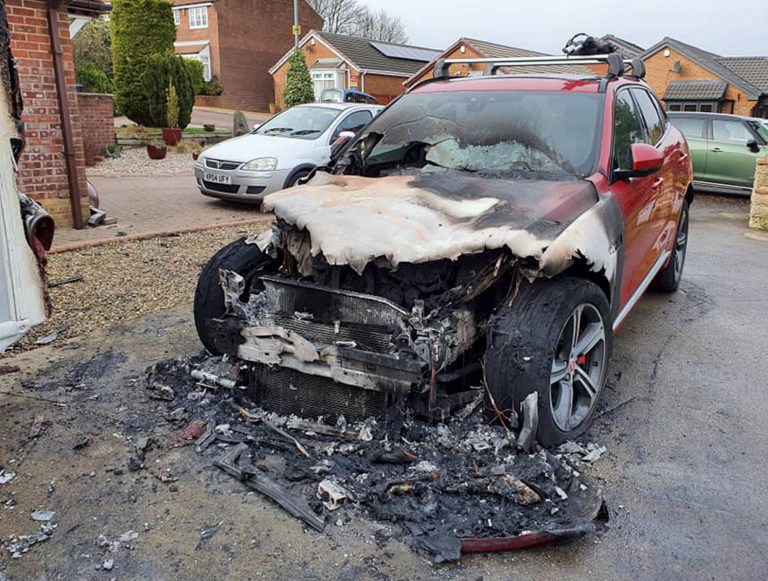 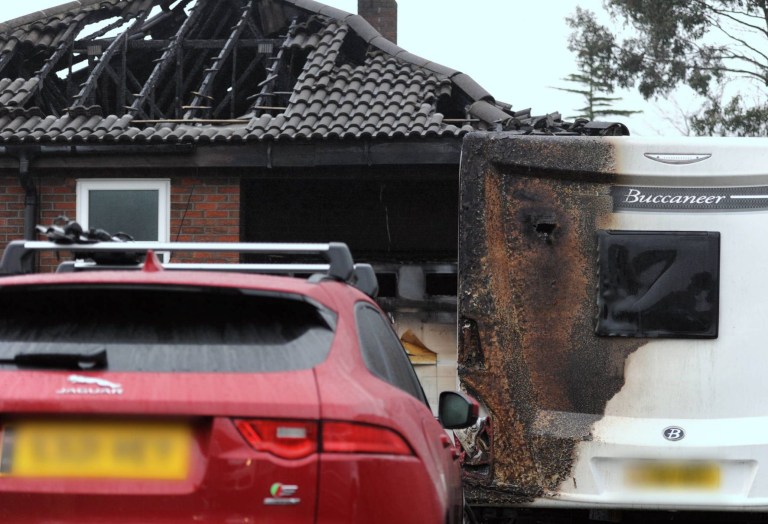 Mr Ivey said his family could have been killed by the fire (Picture: North News and Pictures) 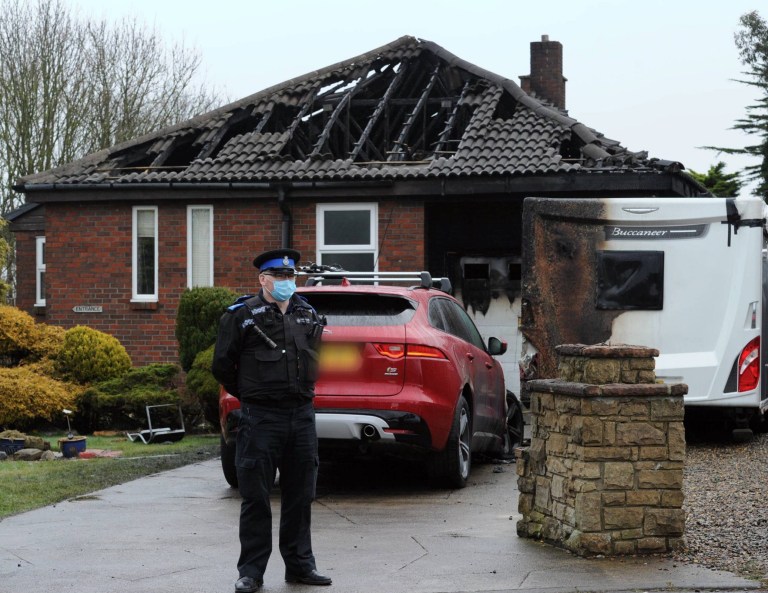 Two men have been arrested on suspicion of arson in respect of each of the fires (Picture: North News and Pictures)

An online appeal to help Mr Ivey, who suffered a head injury while he was serving, had raised more than £57,000 by Saturday afternoon.

Keith Miller, who set up the page, wrote: ‘I served with Sean at 45 Commando and he is a man of exceptional character with integrity and humility.’

Durham Police said a dispersal order will be put in place over the weekend meaning anyone failing to leave the area when asked will face arrest.

Inspector Emma Kay said: ‘Thankfully nobody was inside the property at the time of the incident, but the fire has understandably had a huge impact on the family and the wider community.

‘I would like to reassure residents that a number of additional officers, PCSOs and staff are currently patrolling the area on foot, bikes and in cars and will be actively carrying out a number of enquiries as we move into the night and over the coming weeks.’

Anyone with information should call 101.

A Look at the Convergence of Big Data and Travel