A previously unknown painting by John Constable has been discovered, to the excitement of art historians. A portrait of a Regency woman in all her finery has not only been identified for the first time, but it has survived with the sitter’s diaries in which she had written about it.

In various diary entries, Emily Treslove described receiving the portrait in 1826 from Constable and sitting for him again three years later so that he could make “the likeness stronger” – the artistic equivalent of a nip and tuck. Constable slimmed down her cheek and nose and painted out her double-chin, a technical study reveals.

Anne Lyles, a world-renowned authority on Constable, told the Observer: “Most of us don’t like photographs of ourselves. It’s the same old thing.”

Describing the portrait as “fascinating and beautiful”, she said that no one had any idea that it had survived. The picture, an oil on canvas, measures 76.2 x 63.5cm.

Treslove was Constable’s neighbour in Charlotte Street, the central London address of his spacious studio. Her husband, Thomas, a QC, was also known to have been painted by Constable about 1822, but his portrait was thought to have been lost.

Now both paintings have emerged for the first time. Two brothers, the Tresloves’ descendants who wish to remain anonymous, recently each inherited one.

Searching the internet, they found a leading art restorer, Sarah Cove, founder of the Constable Research Project, which focuses on technical and scientific study. She confirmed the attribution.

She removed almost 200 years of grime, soot and discoloured varnish from Emily’s portrait, revealing delicate details of her glistening gold and garnet jewels and her lavish satin and lace dress.

She said: “The portrait of Emily has the most fantastic costume of any female portrait painted by Constable. It is extraordinarily exuberant, amazingly elaborate.

“The face is very well painted. I discovered during the technical examination that it has actually been partially repainted. Her cheeks and nose have been made slimmer and it looks as if he’s slightly painted out a double chin. Also, the hairstyle has been changed. Perhaps she thought that she looked a bit porky when it was done first time round. I just think that’s hilarious.” 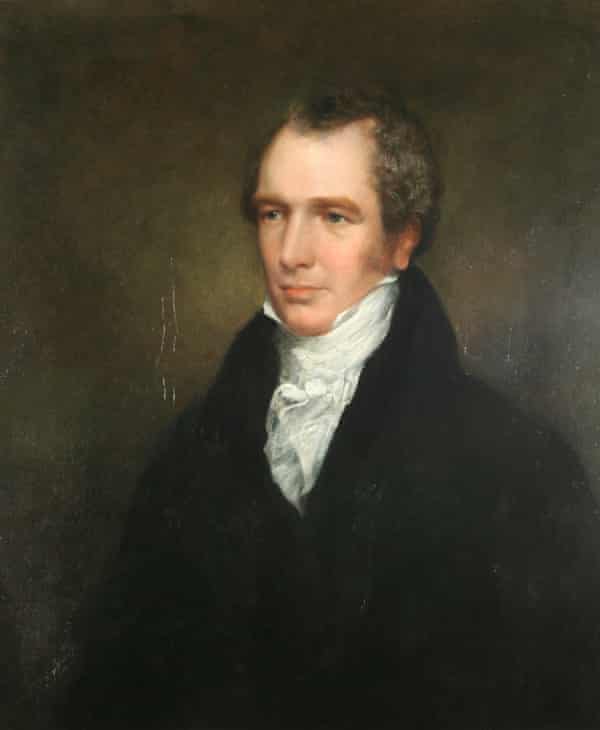 Cove also discovered that Thomas’s portrait had been repainted by Constable, particularly parts of the costume and the grey-green background, which was originally red. She speculates that the artist may have wanted it to match Emily’s portrait, which has a grey-green background and to avoid clashing with her bright pink dress. This way, they would appear to be a matching pair.

The sitter’s descendant joked about Emily’s “artistic Botox”. Referring to Netflix’s raunchy regency costume drama, he said: “She now looks absolutely fabulous and straight out of Bridgerton. A young Regency lady, bedecked, sashed and bowed in delicate pink, emerged from the dark, with each piece of her ornate and flamboyant jewellery flashing and sparkling as it must originally have done when she was first painted.”

He added: “With Emily came not only her diary, but a small pearl and garnet brooch from this collection.”

In her diary of March 1825, Emily recorded that Thomas had “this evening presented me with a most magnificent necklace and earrings composed principally of garnets set in pearls”. Weeks later, he had added “a most superb pair of bracelets and brooches to correspond”.

In July 1826, she wrote of another gift: “My portrait came home, my husband thinks it resembles me very much. It was painted by Constable and cost 40 guineas and the frame 7. Constable also painted my husband four years ago which I think a very good likeness and it is generally thought so.”

But doubts about her likeness had clearly crept in. Soon afterwards, she wrote: “My sister Ann spent last week with me, she does not like my picture thinks there is scarcely any resemblance.”

Clearly those doubts only intensified because, in May 1829, she wrote of having the portrait improved: “I sat two hours this morning to Mr Constable for the purpose of having some alteration made in my portrait.” The following day, she recorded: “Went again to Mr Constable who I believe has now completed the picture and made the likeness stronger.”

Lyles is co-curating a forthcoming major exhibition, titled Late Constable, which opens at the Royal Academy of Arts in London on 30 October, nearly 200 years after he first exhibited there and in whose schools he learned his craft.

The exhibition explores Constable’s late style, from 1825 until his sudden death in 1837, and includes plein air sketches of Hampstead Heath and studies of cloud formations.

Although the show does not feature portraits, Lyles could not resist reproducing Emily’s portrait in the accompanying catalogue. The exhibition includes masterpieces that Constable painted at around the same time such as the Leaping Horse, the six-foot canvas exhibited at the Royal Academy in 1825 and once described by Lucian Freud as the greatest painting in the world.