The Aesculapian Rat Snake appears to have a stable population in North Wales (Picture: Getty Images)

A type of snake that eats rats and can grow up to six-foot in length is breeding in the wild again, researchers believe.

The Aesculapian Rat Snake is now thought to have a stable population in the Colwyn Bay area of North Wales.

It was once a native species to Britain before the Ice Age and appears to be settling in the country again after a 10,000 year hiatus.

Commonly found in southern Mediterranean and Balkan countries, the snakes were imported from Italy to the Welsh Mountain Zoo in the mid 1960s.

In the early 70s, babies were found in the grounds, but were initially brushed off as grass snakes because of their yellow markings.

By the time they were confirmed as Aesculapians, they’d already started spreading slowly beyond the zoo.

PhD student Tom Major has been studying the snakes for five years now, and says life can’t be easy for them in North Wales. 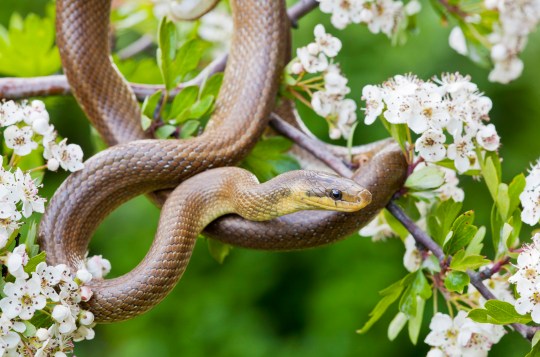 They are not poisonous and are being welcomed by some conservationists (Picture: Getty Images)

They are hesitant to cross over roads, limiting their range, and they struggle to find prey – typically rat-sized rodents,

‘We found a snake yesterday that was born around September 2018 and that weighed eight grams in 2019,’ Tom told North Wales Live.

‘Three years later, it weighed 15 grams – about the same as an HP pencil. Even allowing for six months of hibernation each year, and the cooler climate, it’s an extraordinarily slow growth rate. It suggests it might have eaten just once or twice in the past three years.’

But still they now appear to be sustaining their numbers, with some conservationists welcoming them as a ‘returning’ species.

The thought of finding one of these creatures in your garden might sound frightening, but Tom says there is little reason to worry.

Aesculapians are not venomous and co-exist with all other species on the continent, he says.

‘For a naturally balanced ecosystem, diversity is usually a good thing. It is used to living alongside humans and there is little or no evidence of it causing any harm,’ the student added.

While they can grow up to six-feet, Tom reckons they wouldn’t grow much more than 1.5 metres in the UK due to its colder climate.

A smaller population of the snakes was found to be surviving on rats along Regent’s Canal near London Zoo in 2010.

But there were just a few dozen there, but Tom believes there are around 70 adults and 120 juveniles in Colwyn Bay.