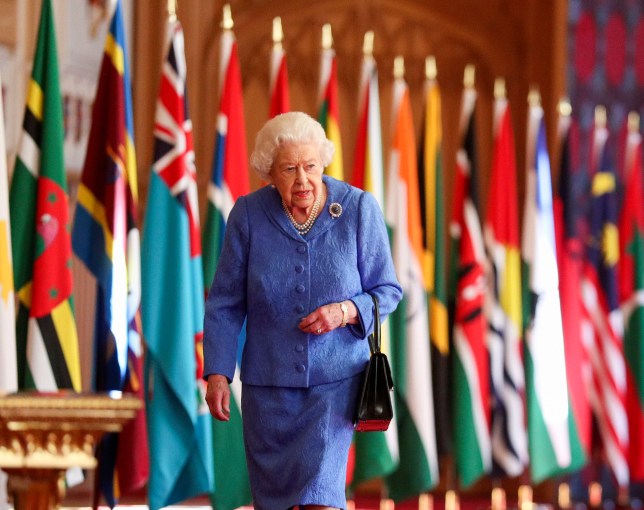 The Queen stressed the importance of staying in touch with family and friends during ‘testing times’ in a TV message that aired just hours before Prince Harry and Meghan Markle’s Oprah interview.

Focusing on the global impact of the coronavirus pandemic during her annual Commonwealth message, she spoke of using technology that ‘transcends boundaries or division’ and how there has been a ‘deeper appreciation’ of the need to connect to others during the crisis.

The Queen also praised the ‘selfless dedication to duty’ seen across the Commonwealth, particularly on the front line.

Senior royals including the Prince of Wales and the Duke and Duchess of Cambridge joined forces to appear in the special BBC One programme on Sunday to mark Commonwealth Day, as the bitter fallout from ‘Megxit’ continues.

It comes ahead of the Duke and Duchess of Sussex’s hotly anticipated interview with Oprah Winfrey, which will air in the USA within hours – and then be shown on ITV on Monday night.

The Queen’s audio message celebrated collaboration, but stood in contrast to the troubles facing the royal family.

As Harry and Meghan were due to explain their decision to leave the monarchy, the Queen, who is Head of the Commonwealth, used her Commonwealth Day message to highlight the ‘friendship, spirit of unity and achievements’ around the world and the benefits of working together in the fight against the virus.

She said: ‘The testing times experienced by so many have led to a deeper appreciation of the mutual support and spiritual sustenance we enjoy by being connected to others.’

Buckingham Palace is bracing itself for the controversial two-hour tell all with Oprah, amid ongoing health concerns around Philip, the Duke of Edinburgh, who remains unwell in hospital.

Extracts have already shown Meghan accused the family of ‘perpetuating falsehoods’ and told how she now felt liberated to make her own choices. Friends say she has been ‘vilified’ in a ‘full scale takedown’.

As footage was played of the Queen’s numerous official video calls, the 94-year-old acknowledged that technology ‘has been new to some of us, with conversations and communal gatherings, including Commonwealth meetings, conducted online, enabling people to stay in touch with friends, family, colleagues, and counterparts who they have not been able to meet in person’.

She continued: ‘Increasingly, we have found ourselves able to enjoy such communication as it offers an immediacy that transcends boundaries or division, helping any sense of distance to disappear.’

She also praised the ‘selfless dedication to duty’ of medical staff and other key workers.

Harry and Meghan – who is pregnant with the couple’s second child – have been accused of being disrespectful to the monarch.

That accusation came when their permanent departure was finalised two weeks ago, with their camp saying, in what was seen as a parting shot: ‘We can all live a life of service. Service is universal.’

The commonwealth message, pre-recorded at Windsor, was accompanied by new footage of the Queen filmed last week at the castle, where she has been staying in lockdown.

The one-off BBC show was arranged after the annual Commonwealth Day event at Westminster Abbey was cancelled this year due to Covid-19.


Last year’s service in the central London church was the scene of Harry and Meghan’s final official engagement as senior royals before they quit the working monarchy.

They had been hailed as the new stars of the Commonwealth.

In the programme, Charles, the Prince of Wales, was featured standing alone in the Abbey, where his youngest son performed his last public duty and where they were last seen publicly together, as he delivered a speech.

William and Kate were filmed making video calls to medical, charity and voluntary staff in South Africa, Bangladesh and Malaysia, while the Countess of Wessex spoke to three women from around the Commonwealth ahead of International Women’s Day.

Camilla, the Duchess of Cornwall, was interviewed by Clare Balding in the Abbey’s Poets’ Corner about the importance of reading for children during a disrupted year of education.