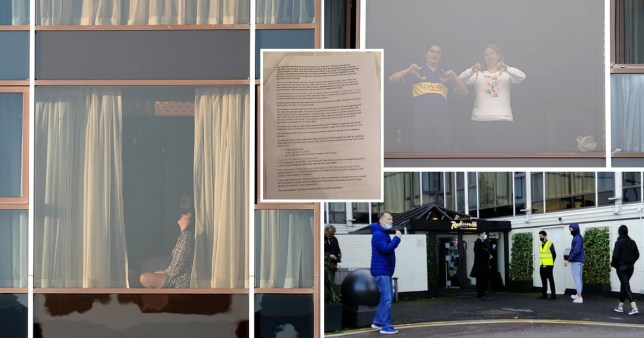 Travellers in London who have been subject to quarantine arrangements and (inset) the letter sent to guests at the Radisson Blu (Picture: Rex/Submitted/Metro.co.uk)

Guests who were in hotel quarantine near Heathrow have told of how a letter about drink, drugs and smoking sparked a mini-rebellion.

The blunt message was sent out to reinforce restrictions intended to guard against Covid-19 at the Radisson Blu Edwardian.

A mum-of-two – who abided by the rules – told Metro.co.uk how others in the hotel refused to accept the reminder.

She said one guest wrote: ‘I do not consent to this,’ on the round-robin letter, while another went around floors ripping up other people’s notices.

Her story was echoed by another guest, Faiza, who also told of how the message angered people self-isolating for 10 days in the four-star hotel.

At the weekend, it was claimed ‘rebel guests’ had been using an outdoor smoking area to party into the early hours.

People were also said to have been seen hugging each other without wearing face coverings and to have joined a WhatsApp group to ‘arrange meet-ups and coordinate smoking breaks’.

The reports of people refusing to comply with the rules were echoed today by the two former guests who spoke to Metro.co.uk. 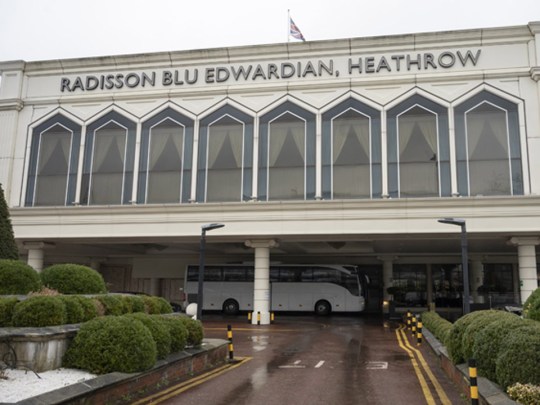 Quarantine hotel guests are alleged to have been ‘partying’ until the early hours in a smoking area at the Radisson Blu Edwardian (Picture: Rex) 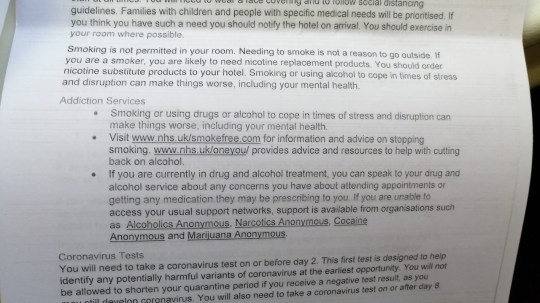 A letter was sent to hotel guests reminding them of the rules and offering advice for those with addiction issues (Picture: Submitted/Metro.co.uk)

The mum-of-two, who did not want to be named, said: ‘The letter had no letterhead, no date and no signature. We were not sure where it came from.

‘Some of the guys ripped them up and put them out with the words “I do not consent to this” in pen all over them.

‘One guy went around the floors and ripped up other people’s as well.

‘Everyone was miffed, confused and angry, especially the smokers.

‘We were also angry because it was like each floor and each guard had different rules. Some people were calling down to reception to go outside while others just went.’

The traveller from Dubai, a South African national, has since joined her husband near Southampton to begin a new family life.

She also said she had seen people giving ‘bro hugs’ at the hotel.

The second guest, who asked to be known by her first name, Faiza, received the letter in the ground-floor room she shared with her elderly mother before they returned to their home in east London last week.

Faiza, who had been to Kenya via Dubai, said: ‘We were confused. You can’t implement new rules every day and expect us to tolerate it. Every day there was a new rule.’

The WhatsApp group was apparently set up for ‘inmates’ at the hotel who dubbed it ‘HMP Radisson’.

A security guard reportedly told the Mail on Sunday that one group of at least 11 guests had ‘ruined it for everyone’ by partying for two hours.

The claims emerged after a letter was sent out reading: ‘Smoking is not permitted in your room. Needing to smoke is not a reason to go outside.

‘If you are a smoker, you are likely to need nicotine replacement products. You should order nicotine substitute products to your hotel.

‘Smoking or using alcohol to cope in times of stress and disruption can make things worse, including your mental health.’ 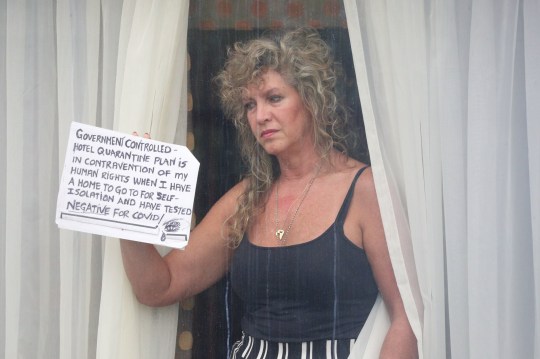 A quarantined traveller holds a sign up to the window of her room at the Radisson Blu Edwardian hotel near Heathrow (Picture: PA) 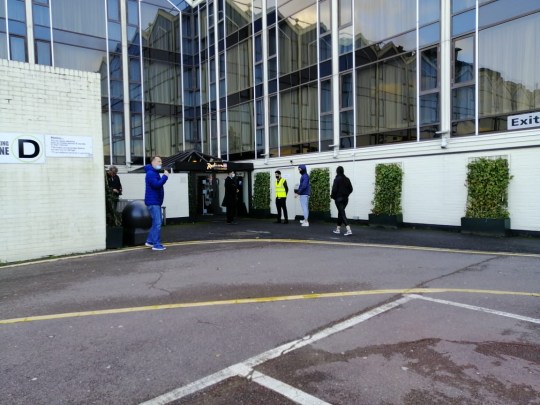 The Radisson Blue Hotel shown in a picture taken by a guest who had been self-isolating for 10 days (Picture: Submitted)

The letter also included advice about drug and other addictions and stated: ‘You should exercise in your room where possible.’

Arrivals from 33 red list countries are supposed to follow strict self-isolation rules under the Government’s policy aimed at keeping new Covid variants out of the country.

The travellers are only allowed to leave their rooms under limited circumstances, including for legal obligations such as attending court and to exercise, as long as it has special permission from security and takes place in a specified area.

The quarantine period costs £1,750 per person but guests face an additional £1,200 bill if they test positive for coronavirus.

A Department of Health and Social Care spokesperson said: ‘As set out in law – travellers who are quarantining within a managed quarantine facility must stay in their room for 10 days and are only allowed outside in a handful of exceptional circumstances.

‘Anyone leaving their room for exercise can only do so when permitted by an authorised person, and has to comply with the requirements set out by that person.

‘Security staff at hotels are fully trained in COVID-secure practises and are in place to enforce social distancing, as well as ensuring people abide by the rules. People quarantining are also provided with wellbeing support, including daily welfare phone calls.’

On Sunday, a hotel spokesperson said: ‘At Radisson Blu Edwardian Heathrow, we take our role in assisting the UK government with its hotel quarantine programme very seriously – to help provide a safe and comfortable experience for travellers.

‘All staff at our properties have been trained in the Radisson Hotels Safety Protocol which includes mandatory use of PPE along with sanitation and hygiene procedures, as well as regular training for all staff on these procedures.

‘Our team is working in partnership with the UK Government-contracted security staff at the property to help keep guests safe and secure.’

Milly may be a shelter dog, but she rescues me every single day