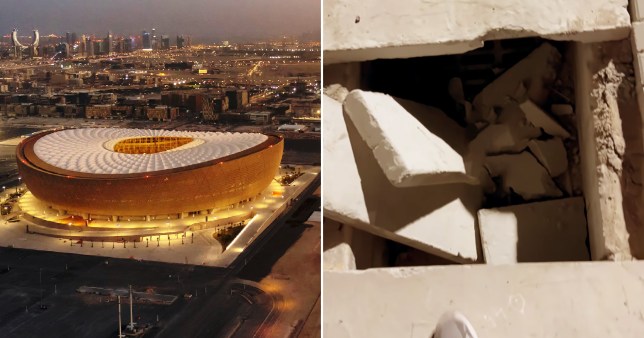 It appeared that part of the walkway outside the Lusail stadium had collapsed (Picture: Instagram/Rex)

A hole has been spotted outside the Lusail Iconic Stadium that will hold the final match of the FIFA World Cup in Qatar.

Multi-media producer and journalist Mohammad Saleh uploaded footage to social media of him appearing to be outside the giant stadium in Lusail city.

Outside one of the ‘flags and banners evaluation’ areas, Saleh found a hole made of two concrete slabs in a walkway that had caved in.

In the clip, later shared today by SPORTBible, Saleh jokingly pretended to stumble into it as he says: ‘Oh my, God.’

Lusail, about 15 miles north of Doha, is both the largest and newest of the eight stadiums built or converted for the tournament.

Designed to reflect traditional hand-crafted bowls common across the Arab world, it will host 10 World Cup matches in all.

But construction of the eight World Cup stadiums has shined a spotlight on the workers who have completely transformed the country in less than a decade.

At least 37 deaths among migrant workers were directly linked to constructing the stadiums, part of a grim toll of more than 6,500 labourers who have died between 2011 and 2020, according to an analysis by the Guardian. 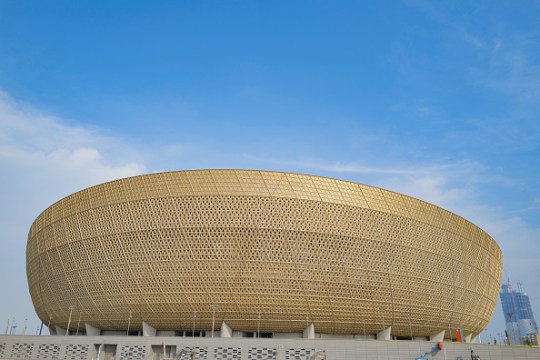 The stadium is in Lusail, the second largest city in Qatar (Picture: AMA/Getty Images) 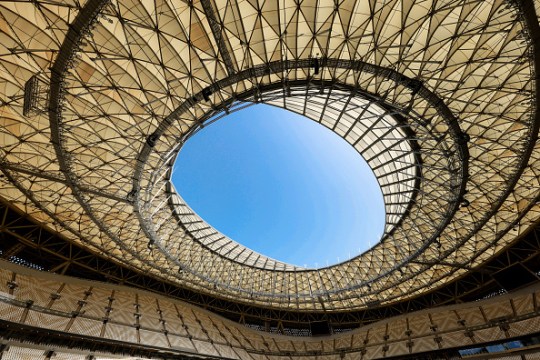 At least 37 people have died linked to the stadium constriction have been recorded by organisers (Picture: AMA/Getty Images)

Of the 37 deaths, 34 have been classed by Qatari officials as ‘non-work related’.

This figure includes two Indians and an Egyptian killed in a road accident while travelling from work to their accommodation in 2019.

‘Work-related deaths’, a phrase used by both FIFA and Qatar World Cup organisers, refers to fatalities on construction sites and training facilities.

The three deaths include two Nepalese men at the Al Janoub Stadium in Al Wakrah and one Briton at the Khalifa International Stadium in Al Rayyan.

Lala Kent, Ambyr Childers Teamed Up Against Me