Putin accused of war crimes ‘that will be remembered for centuries’

Just yesterday Vladimir Putin’s forces bombed an art school where 400 people are said to have been sheltering (Picture: AP/Getty)

Ukraine’s president accused Russia yesterday of war crimes that ‘will be remembered for centuries’.

Volodymyr Zelensky’s verdict came as Vladimir Putin’s forces bombed an art school where 400 people are said to have been sheltering in Mariupol.

The Kremlin regime was likened to Hitler’s Nazis by officials in the besieged southern city after reports thousands of residents had been ‘forcibly’ removed to remote parts of Russia.

And claims also emerged that the invaders had opened fire with a tank on a care home, killing 56 pensioners in eastern town Kreminna.

One of the reasons given by Putin to justify the invasion was the supposed ‘de-Nazification’ of Ukraine.

But Mr Zelensky said it was the invaders whose brutality in Mariupol would ‘go down in history for responsibility of war crimes’.

In an address to his nation, he added: ‘To do this to a peaceful city, what the occupiers did, is a terror that will be remembered for centuries to come.’

The UN High Commissioner for Refugees Filippo Grandi said: ‘The war in Ukraine is so devastating that 10million have fled — either displaced inside the country, or as refugees abroad.’

Russia is said to have increased its bombardment of cities with thermobaric weapons — vacuum bombs — which suck oxygen from the air to create a huge blast that can vaporise human bodies. 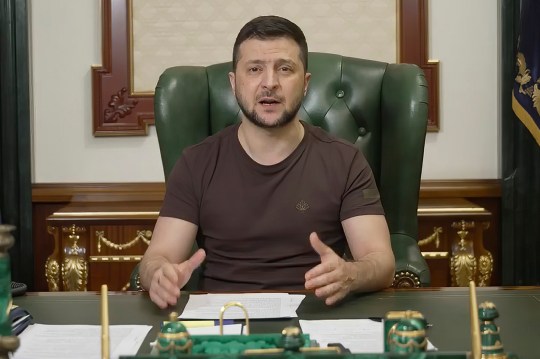 Mr Zelensky said the invaders’ brutality in Mariupol would ‘go down in history for responsibility of war crimes’ (Picture: AP) 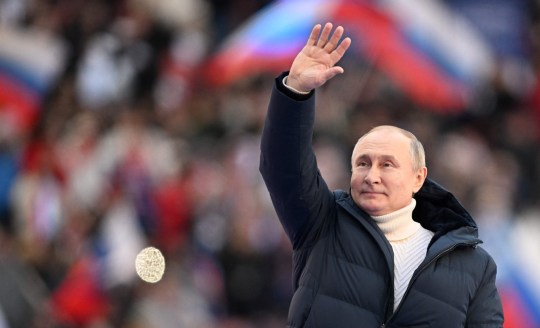 The Kremlin regime was likened to Hitler’s Nazis by officials in the besieged southern city of Mariupol (Picture: Pool/AFP)

And on Saturday, Moscow said its hypersonic missiles, which travel five times faster than the speed of sound, had destroyed an underground depot for missiles and aircraft ammunition in the western Ivano-Frankivsk region.

Mariupol is thought to have suffered some of the heaviest bombardment since the war began. Many of its 400,000 residents remain trapped with little food, water and power.

City officials said at least 2,300 people have died, with some buried in mass graves. The art school was mostly destroyed in yesterday’s bombardment, but it was thought survivors could be trapped in the rubble.

On Wednesday, a bomb hit a theatre in the city where authorities said more than 1,000 people were sheltering.

The Russian word for children had been written on the ground at both sides of the building.

At least 130 people were rescued from the rubble and there have been no reports of any deaths.

Mariupol’s mayor Vadym Boichenko said several thousand people who had escaped death and injury from the bombardments were being ‘kidnapped’ and taken to be resettled in remote regions of Russia against their will.

‘What the occupiers are doing today is familiar to the older generation, who saw the horrific events of World War II, when the Nazis forcibly captured people,’ he added. 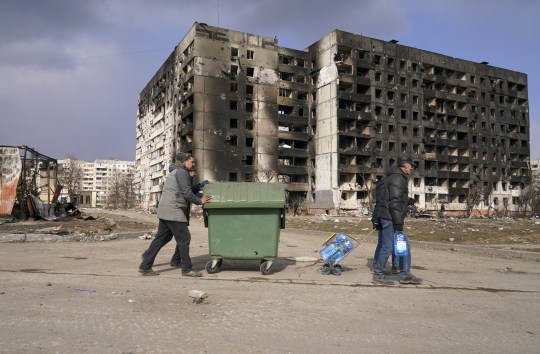 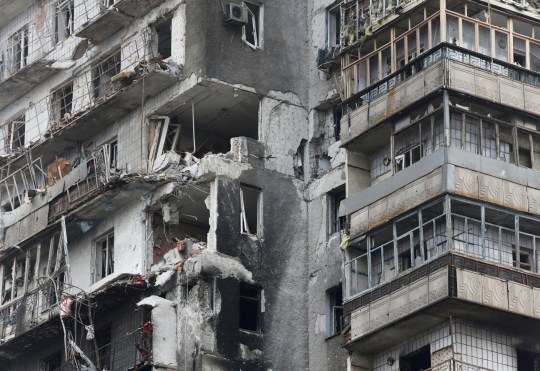 Ukrainian MP Inna Sovsun said Moscow had re-introduced Soviet-era gulags and was using Ukrainians as ‘slave labour’. She told Times Radio refugees were taken to ‘so-called filtration camps’ and ‘then they’re being relocated to very distant parts of Russia’.

She said they were ‘forced to sign papers agreeing to stay in that area for two or three years and they will work for free’.

Russia-backed separatists in eastern Ukraine said 2,973 people have been evacuated from Mariupol since March 5.

Capturing Mariupol would help Russia secure a land corridor between eastern Ukraine and the Crimea peninsula, which it annexed in 2014. Russia last night urged Ukrainian forces to surrender as a ‘terrible humanitarian catastrophe’ was unfolding in the city.

‘All who lay down their arms are guaranteed safe passage out of Mariupol,’ said Colonel-General Mikhail Mizintsev.

He said humanitarian corridors would be opened this morning.

And Ukrainian authorities said they would be sending nearly 50 buses to evacuate people. Serhiy Hayday, an official in Kreminna, said Russian forces ‘cynically and deliberately’ targeted the care home.

Fifteen survivors were ‘abducted by the occupiers’ before being taken to a ‘regional geriatric home’ in another part of Ukraine, he added.

At least 40 Ukrainian soldiers were killed in a rocket strike on a barracks in Mykolaiv where 200 were sleeping. At least five civilians, including a nine-year-old boy, died in shelling in the eastern city of Kharkiv.

But in Sumy in the north-east, 71 orphaned babies were taken out through a humanitarian corridor.