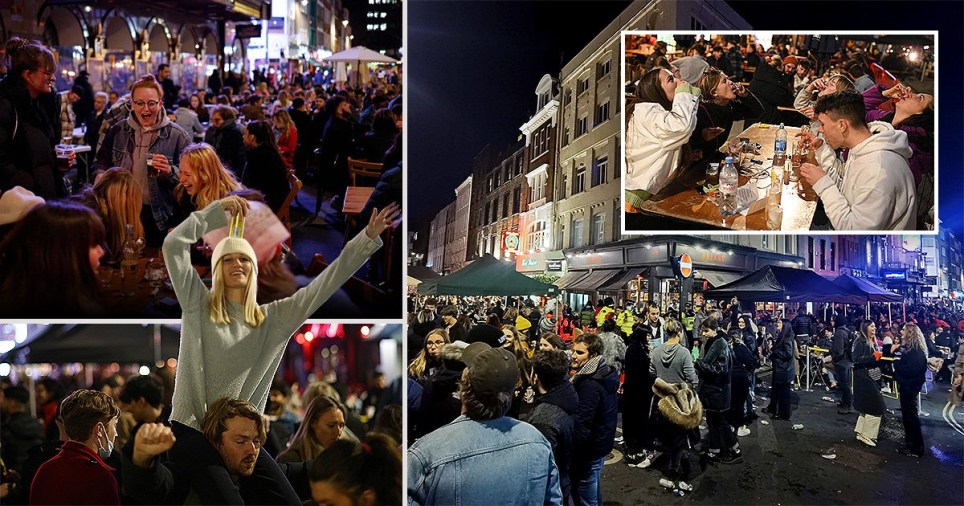 Brits across the country celebrate as they return to beer gardens for the first time in months (Picture: Reuters)

Pubs across the country were packed on Monday night as lockdown weary Brits enjoyed their first post-work pints in four months.

London’s Soho was booming with customers as bars set-up outdoor seating areas in the street.

A video shows punters in the central London area spontaneously clapping and cheering as they made the most of their new freedoms.

Others could be seen raising a glass and dancing on the street.

People took to Twitter to praise the ‘carnival atmosphere’ with one proud Londoner tweeting: ‘Soho becomes electric. It’s evenings like this that London lives for’.

Journalist Matthew Thompson said: ‘Hard to believe this is central London on a Monday night as opposed to some decadent festival. Spontaneous cheering. People quite literally dancing in the streets- the liberation is palpable.’ 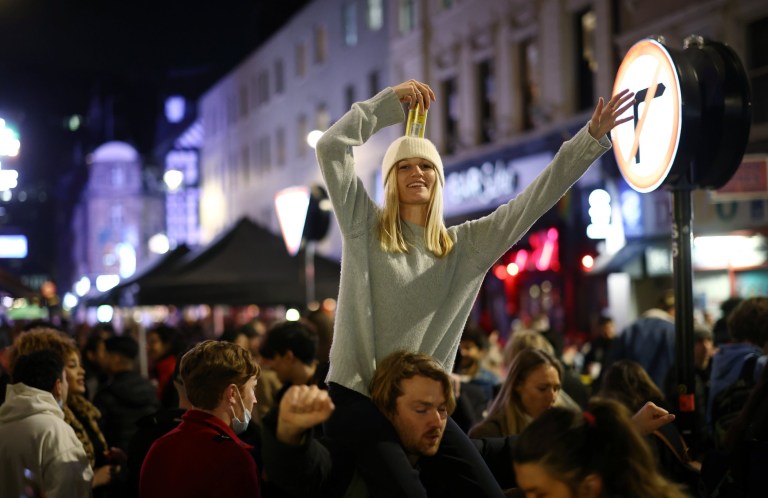 People party on a street in Soho on the first day of restrictions easing (Picture: Reuters) 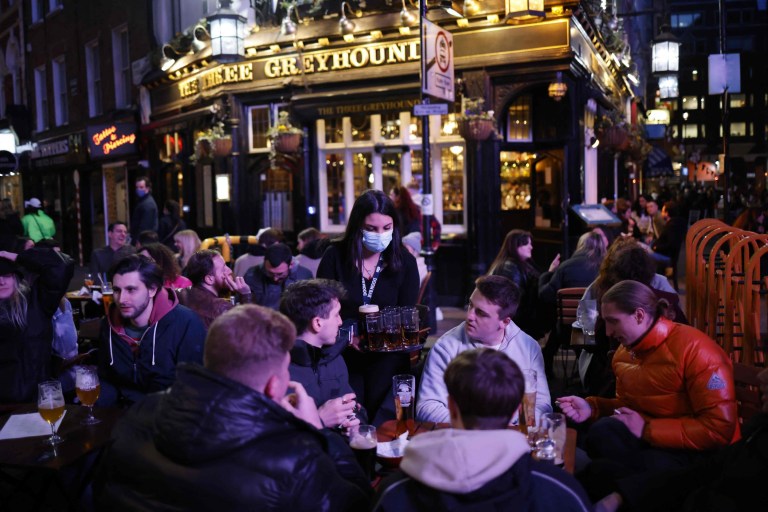 Customers enjoy drinks at tables outside the bars in the Soho area of London (Picture: AFP) 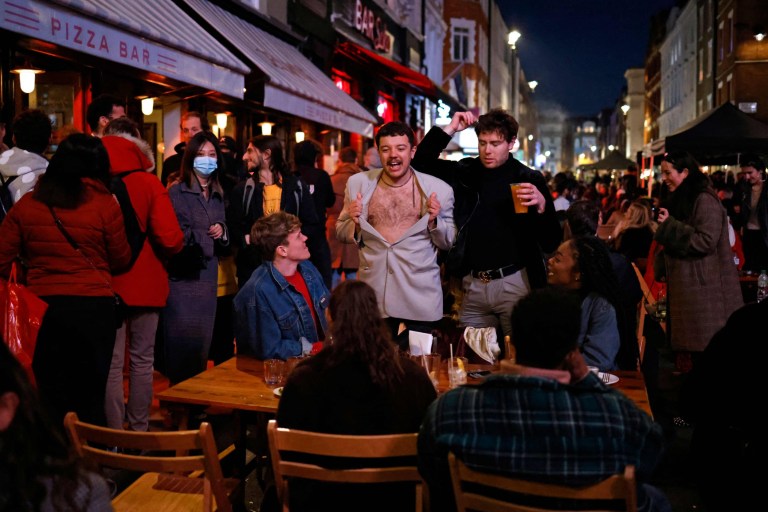 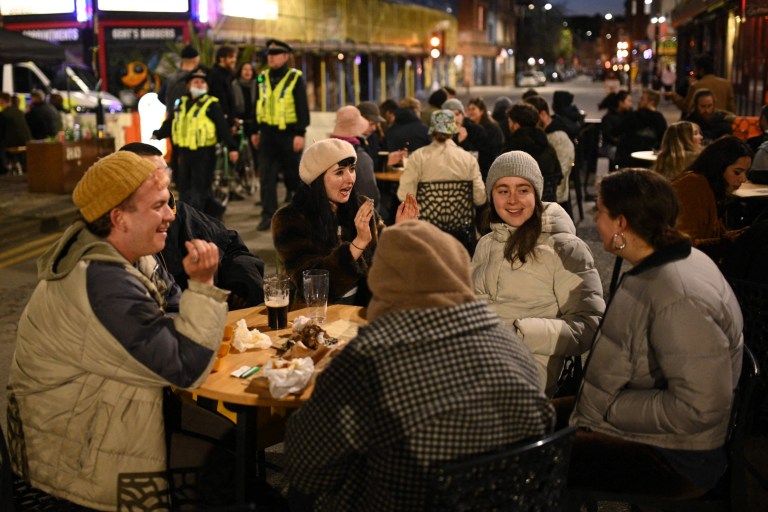 Customers enjoy drinks at tables outside the bars in the Northern Quarter of central Manchester (Picture: AFP)

Police officers patrolled busy areas in the capital on Monday night as hordes of people flocked to central London to enjoy al-fresco dining and drinks.

Several West End streets were closed to traffic between 5pm-11pm to create outdoor seating areas as part of measures to support hospitality businesses.

While the majority of people were in high spirits, some were pictured being arrested by police officers.

It is not clear how many were arrested and the Met said they were not aware of any major issues when contacted by Metro.co.uk.

Attila Kulcsar, a media communications manager, said the crowds felt ‘like a return to the ‘real’ Soho of the 1990s’. 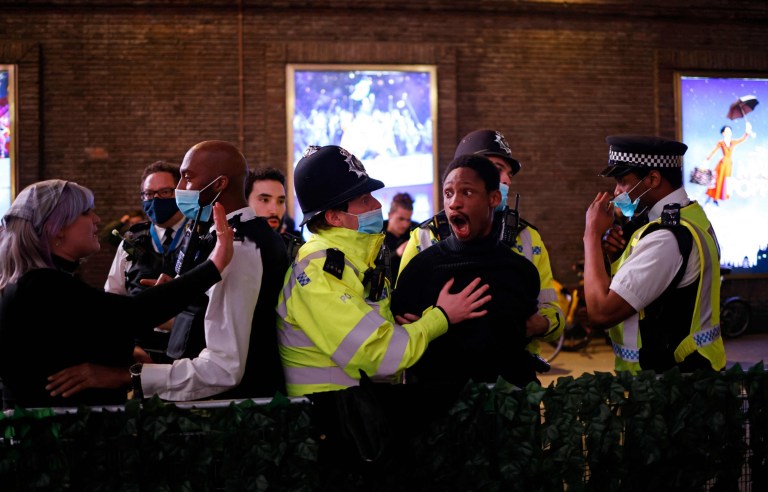 While most were in high spirits, some people were arrested (Picture: AFP) 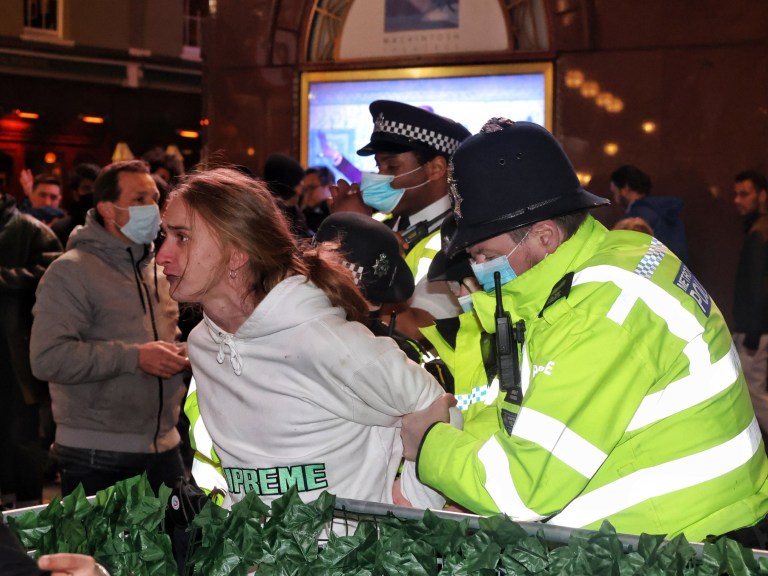 It is not clear how many arrests were made (Picture: Avalon) 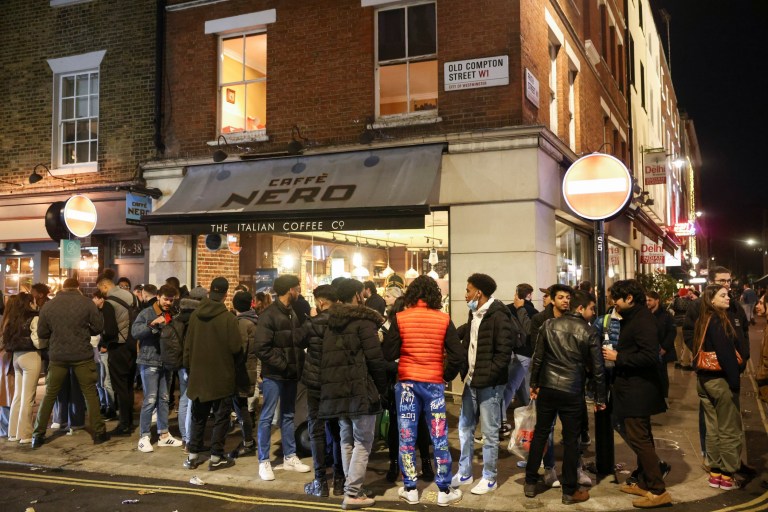 The atmosphere in Soho was described as ‘like VE Day’ (Picture: Reuters) 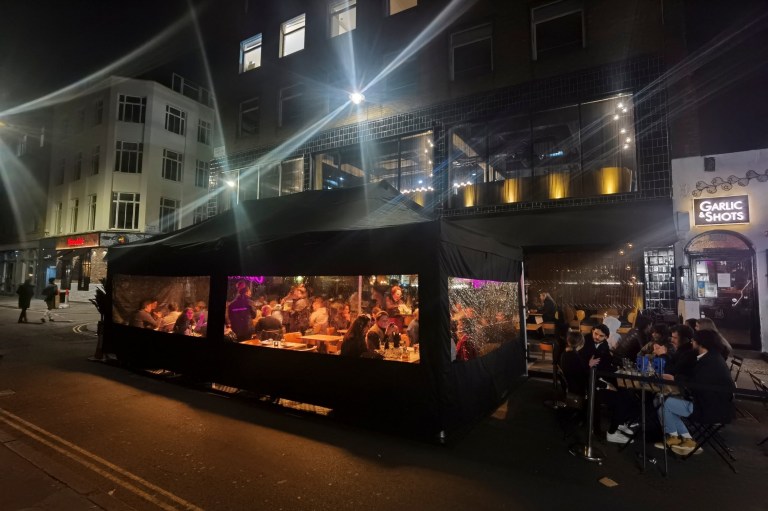 One reveller said there was ‘raucous hysteria everywhere’ (Picture: Backgrid)

‘Tonight’s atmosphere beats the whole of last summer… it really is like how I imagine VE Day,’ the 54-year-old said.

‘There is a wonderfully raucous hysteria everywhere. It’s very celebratory.

‘There is very little social distancing. A distinct sense that people feel the Covid restrictions have ended.

‘There are lots of police around Soho as well as Covid Marshalls, but there is no word from them about social distancing… if anything they seem to be joining in the festivities.’ 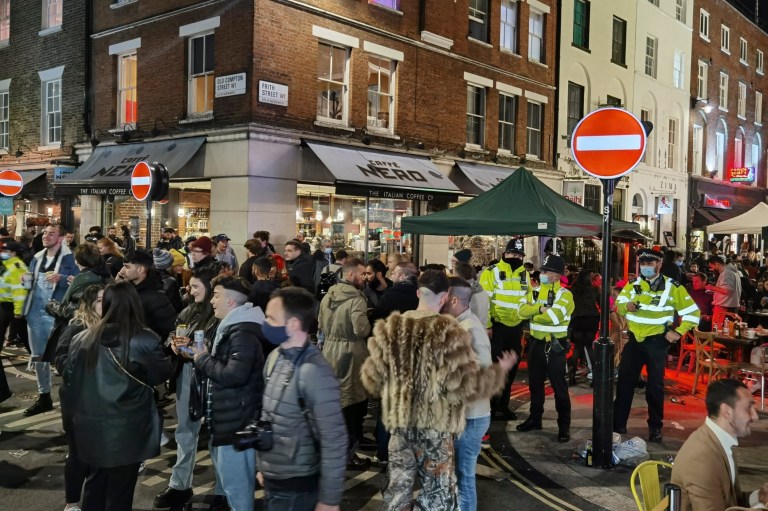 Some have expressed concern there was little social distancing (Picture: Backgrid) 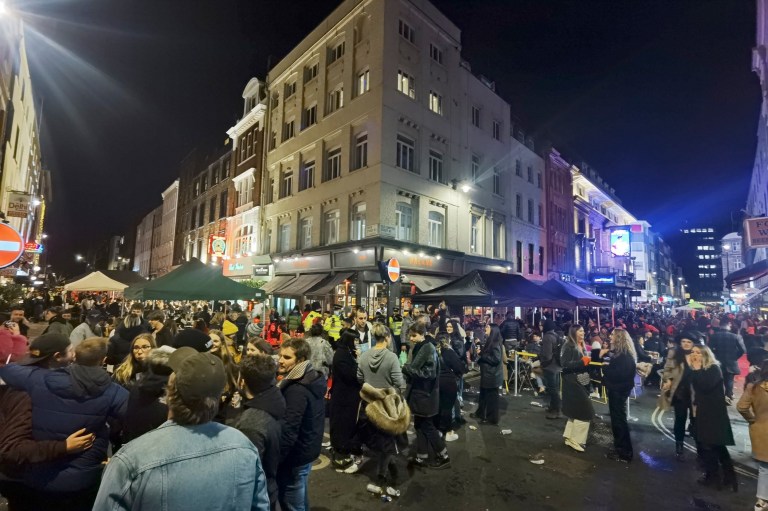 Westminster Council said it was aware of ‘isolated incidents of crowding’ (Picture: Backgrid) 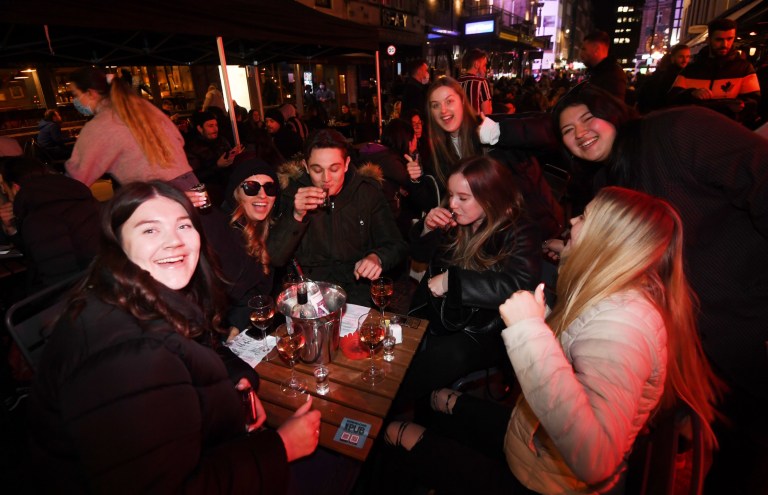 Friends drink and eat outside in Soho in London (Picture: EPA)

Westminster City Council said it was aware of ‘isolated incidents of crowding’ and that it was working with businesses to ensure they are operating ‘responsibly and safely in line with guidance’.

A council spokesperson said: ‘We are pleased that visitors can return to the city and enjoy the shops and outdoor hospitality safely.

‘We have implemented a range of measures across Westminster to enable social distancing, including additional footway space and barriers.

‘We also have Covid Marshalls and city inspectors working across the city to help businesses support accessibility, social distancing and to respond to any issues.

Pubs were also brimming with thirsty Brits in Manchester, Liverpool and Birmingham. 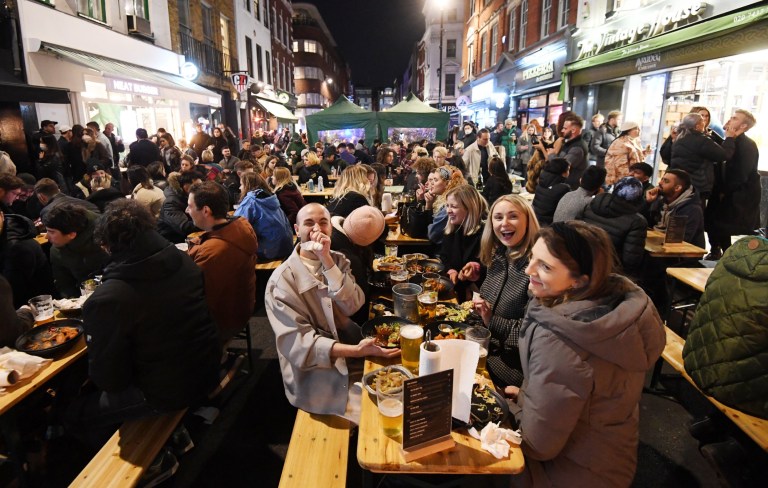 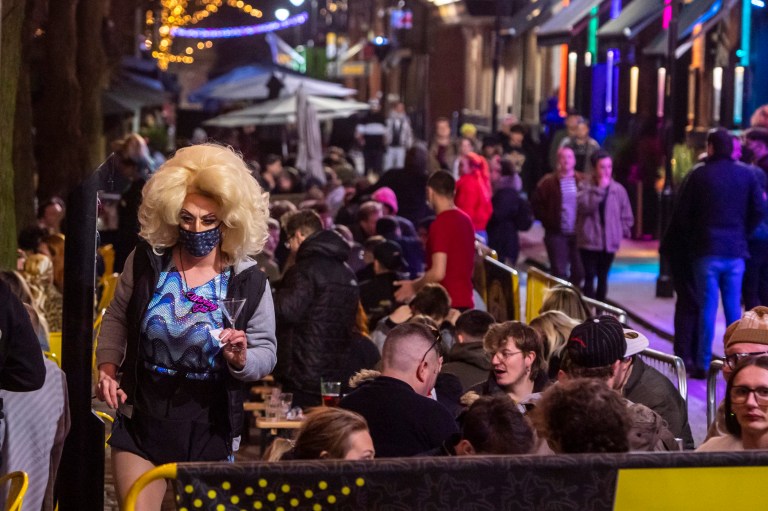 There were busy scenes in cities across the country, including Manchester (Picture: EPA) 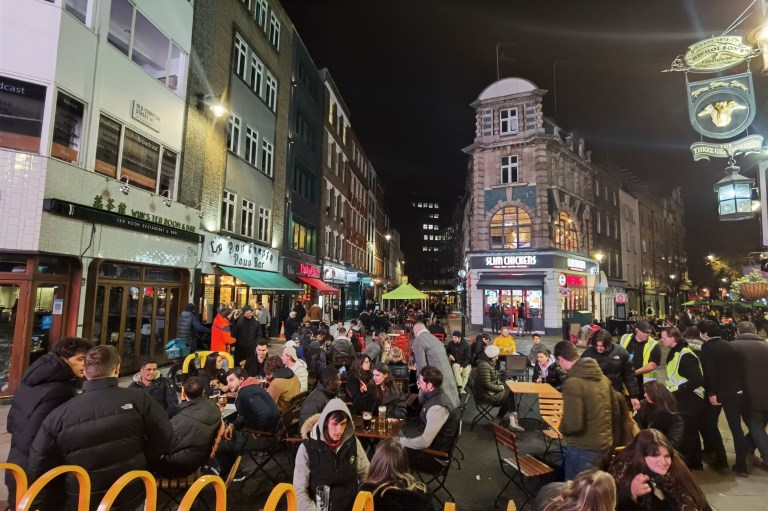 The fact that’s it’s a Monday did not stop Brits from flocking to their favourite pub (Picture: Backgrid)

Some queued before midnight so they could down a pint as soon as the clock stuck 12, when pubs were allowed to reopen.

Freezing weather in the south east did not deter Brits from getting dressed up and heading to their favourite local.

Others enjoyed their first pints in the sun, with lively scenes continuing throughout the day and into the night.

According to combined data compiled by Altus Group, nearly 80,000 pub, restaurant and cafe premises are eligible to reopen under the relaxation of rules.

But the real estate adviser warned that it remains to be seen how many have actually been able to welcome customers back under the outdoors requirements.

Pubs, bars and restaurants won’t be able to open indoors until May 17 at the earliest.

The British Beer and Pub Association estimates that just 40% of licensed premises have the necessary space to reopen. 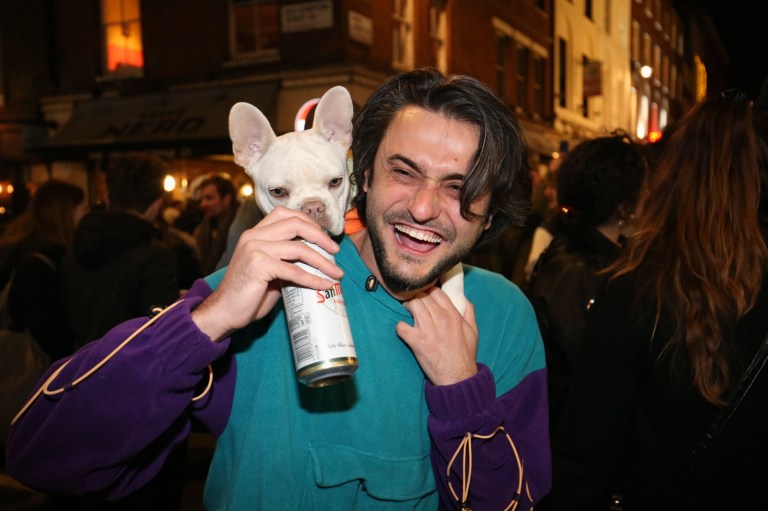 Most people were in high spirits as they celebrated lockdown lifting (Picture: PA) 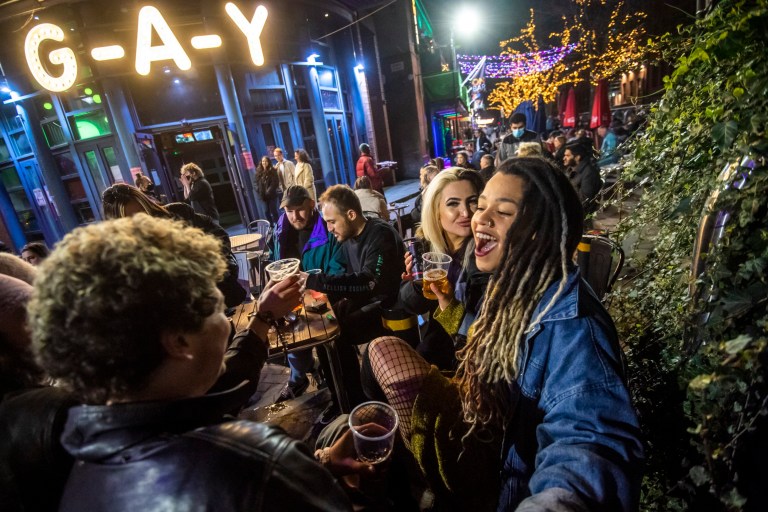 Under the rules, pubs and restaurants are allowed open their outdoor areas with no requirements for patrons to order food (Picture: Getty) 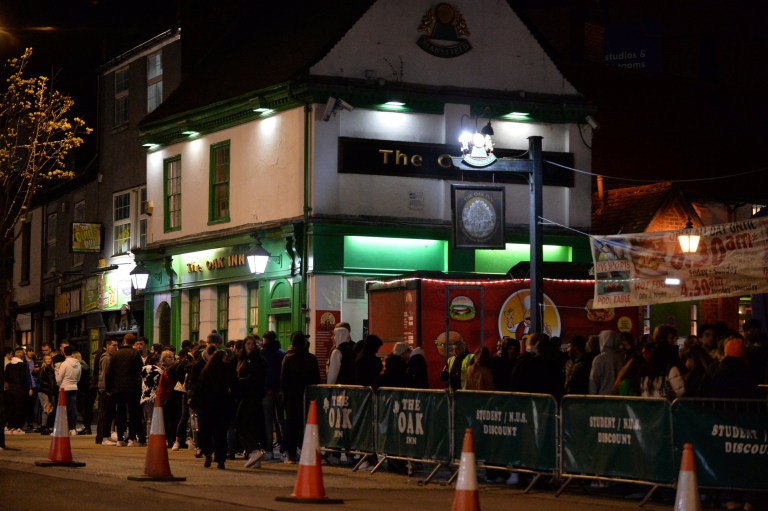 One pub in Coventry is under investigation over the length of the queue that formed at midnight (Picture: SWNS.COM)

Pub landlords urged Brits to support the hard-hit hospitality industry by coming out for food and drink.

But in Coventry, one pub faces investigation by the city council after a long queue of people formed for its midnight reopening.

Footage shared on social media showed more than 100 people waiting outside the Oak Inn, near the city’s university, after it advertised plans to open its large outdoor space.

Images of crowds in the venue’s garden appeared to show people well spaced out and following the guidance of no more than six per table, but some said that social distancing seemed not to be enforced in the queue outside.

Owner Darren Lee said he believed the venue had worked within the rules. 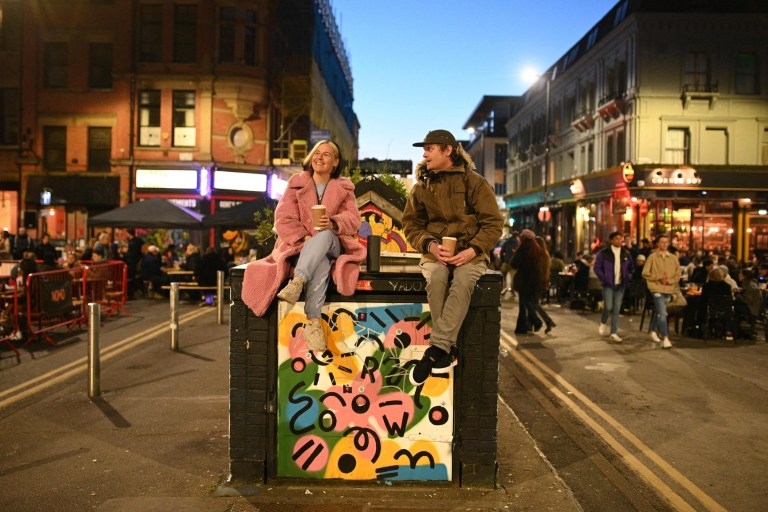 People drink in the street outside the bars in the Northern Quarter of central Manchester (Picture: AFP) 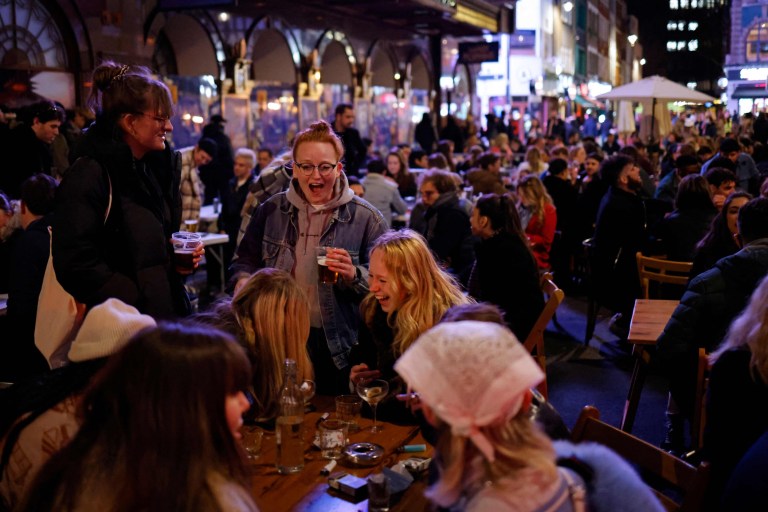 The country is taking tentative step towards the resumption of normal life (Picture: AFP) 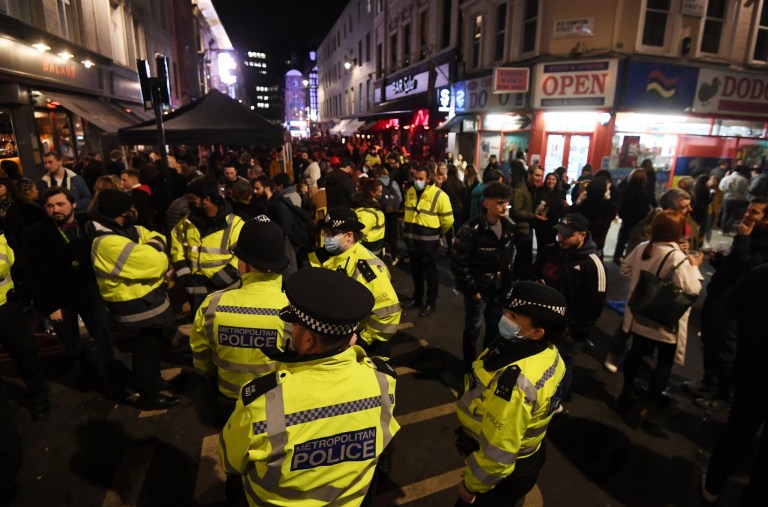 Lawrence Young, a virologist and professor of molecular oncology at Warwick Medical School, described ‘a joyous day’ but warned people should remain cautious.

He said: ‘The current reduction in cases and hospitalisations is not only due to the success of the vaccine rollout but also the impact of lockdown in preventing virus spread.

‘So while taking the opportunity to enjoy shopping and outside hospitality, we must remain cautious – the virus is still out there and very infectious.

‘We can’t ignore what’s going on in the rest of the world – every other day new variants are being reported and infection is rife.’