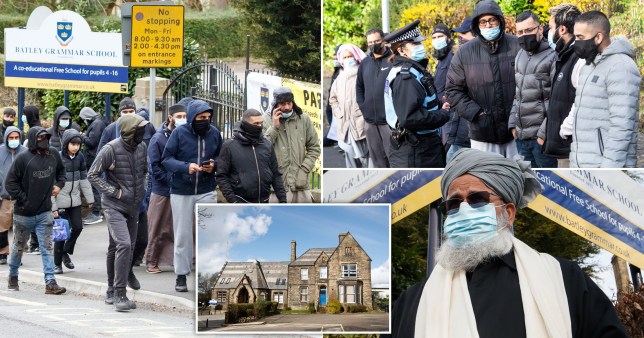 There were angry protests outside Batley Grammar School in West Yorkshire after a cartoon of the Prophet Muhammad was shown in class (Picture: PA)

A cartoon of the Prophet Muhammad that sparked angry protests outside a school this week ‘had been showed to pupils before’, according to parents.

An unnamed teacher, 29, who used the image in his RS class has been suspended pending an investigation after crowds of protesters gathered outside Batley Grammar School in West Yorkshire for two days running.

The group said the use of the image was insulting to their religion and called for the teacher to resign.

But past students and parents have defended him, saying he’s been singled out and the image has been used as a resource by different teachers previously, without attracting the same controversy.

One parent told The Times: ‘This was taught last year to my daughter by a different teacher. I know it’s been taught in other years, in other lessons. Why single this teacher out?’

The cartoon shown was widely reported to be the one taken from the French satirical newspaper Charlie Hebdo, which sparked protests around the world upon its publication in 2015.

Any depiction of the prophet is deeply offensive to Muslims but some have defended the use of the image using freedom of speech arguments.

The protests have sparked a major debate in the country, with even the Education Secretary Gavin Williamson weighing in and condemning the ‘threats and intimidation.’ 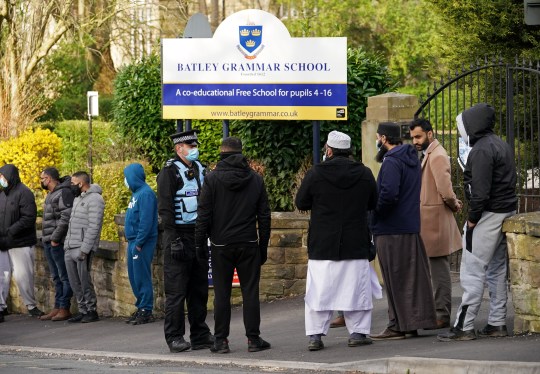 The school was forced to close for the rest of the week due to the protests (Picture: Getty Images)

A petition to reinstate the teacher has now reached 35,000 signatures.

A former student, who took part in the same lesson last year, told The Times: ‘He just showed the picture and spoke to us about it.

‘He never asked for permission. It was a cartoon. No one was really shocked to be fair. It was just on the whiteboard, on the projection screen. Part of integrated studies class.’

The school was forced to close for the rest of the week after the protests started on Thursday. Headteacher Gary Kibble has apologised ‘unequivocally’ and said the offending part of the lesson was being withdrawn. 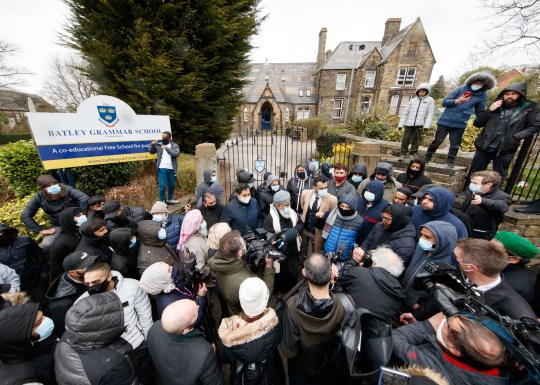 The protests have sparked a nationwide debate (Picture: PA)

Cabinet minister Robert Jenrick said yesterday that suggestions the teacher in question has had to go into hiding were ‘very disturbing.’

‘It must be right that a teacher can appropriately show images of the Prophet Muhammad,’ he told the BBC.

‘In a free society, we want religions to be taught to children and for children to be able to question and query them.’ 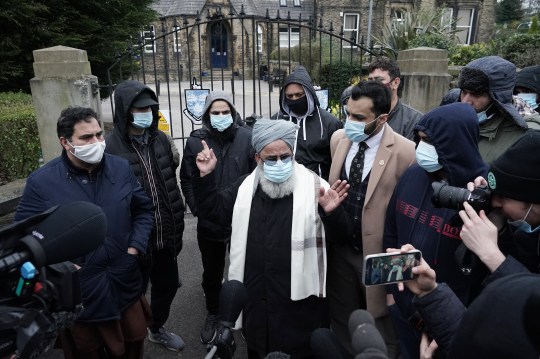 A man speaking outside the school called for a review of materials being used in lessons (Picture: Getty Images)

A protester speaking ‘on behalf of the Muslim community’ read out a statement outside of the school on Friday, in which he said: ‘The teachers have breached the position of trust and failed their duty of safeguarding, and this issue must be addressed as a matter of urgency.

‘We do not accept that the school has taken this issue seriously, given that it’s taken them four days to merely suspend only one of the teachers involved.’

He called on the entire British Muslim community to review the materials being taught in their children’s schools.