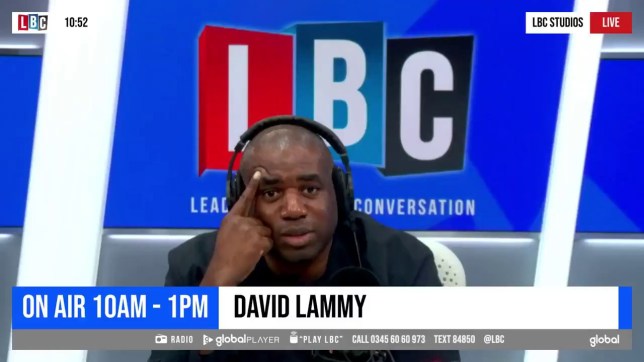 A black frontbench politician has been told he is ‘not English’ live on national radio, despite being born in the country.

A caller named Jean repeatedly insisted that David Lammy was ‘African Caribbean’, while claiming that he was British but ‘would never be English’. She also suggested that people are being ‘polluted’ by the ‘way the whole world is going’.

The Labour Shadow Justice Secretary provided a calm rebuttal to Jean’s comments, noting that he had been born in England and that Britain had colonised countries for hundreds of years before people migrated here.

Jean told Mr Lammy, a former Culture Minister, on an LBC phone in: ‘You will never be English, you are African Caribbean.

‘If I was born in the Caribbean, as a white person, I certainly wouldn’t call myself Caribbean.’

The Tottenham MP asked Jean if she had ever been to the Caribbean and when she replied no, he said: ‘Well then you probably don’t realise that in countries like Barbados there are significant white Caribbean populations who have been there for hundreds of years and they are significantly more Caribbean than I am.’

After a brief pause, Jean says: ‘Well all I would say is the whole world is polluting everybody the way it is going… because you are what you are.’

Mr Lammy, 48 and born in London, interrupts her to point out that the word ‘polluting’ has very negative connotations.

He added: ‘It is a negative way to describe the fact that people meet one another, they fall in love, they have kids, they move borders… and they become what they become when they are of that country.

He proceeded to discuss the context of the British empire and various other historic issues.

He tweeted this evening: ‘Don’t ever tell me I’m not English’.

Anne Alexander, a senior political producer for Good Morning Britain, wrote on social media: ‘People commenting on how calm and polite David Lammy is to this caller. Thing is, we often are, due to years of dealing with stuff like this + tying to avoid “angry black person” accusations.

These images show what it’s like to live with dementia


‘What if he HAD got mad and was NOT polite?  Hope he would get the same level of support.’

SNP candidate Humza Yousaf added: ‘David Lammy incredibly patient and dignified, but we shouldn’t have to be dignified and calm when faced with this awful dog-whistle racism.

‘And my goodness what an incredible lack of the knowledge from the caller on all things related to the British Empire. Well handled.’

LBC presenter Iain Dale tweeted: ‘A masterclass from David Lammy in how to handle an elderly lady caller who’s, well, a bit of a racist.’