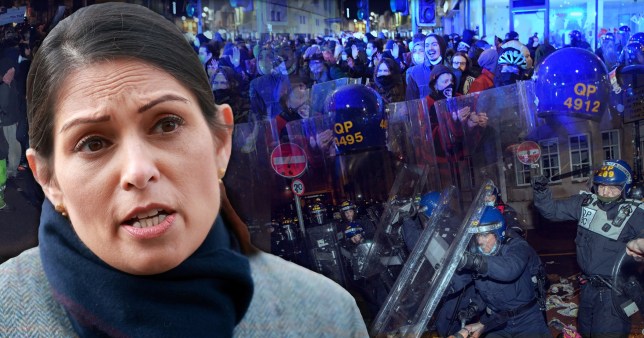 Protesters launched fireworks at police, while officers have been accused of battering protesters with their shields (Picture: Reuters/SWNS/Rex)

Priti Patel has named ‘Kill the Bill’ demonstrators ‘thugs’ after a night of violence in Bristol ended in ten arrests.

Glass bottles, bricks and eggs were thrown at police and fireworks were launched at a mounted division by a ‘minority’ of protesters as more than 1,000 protested against a bill to give officers more power to impose conditions on non-violent protests.

Taking to Twitter this morning, the home secretary claimed it was ‘clear’ a small number of those present were ‘intent on causing trouble’.

She said: ‘I am disgusted by the disorder in Bristol and the violence being directed towards the police.

‘I’m in no doubt the silent, law-abiding majority will be appalled by the actions of this criminal minority.

‘Despite repeated warnings to disperse, it’s clear these thugs were only intent on causing trouble. I am receiving regular updates and the police have my full support.’

He said: ‘Our officers should not have to face having bricks, bottles and fireworks being thrown at them by a mob intent on violence and causing damage to property. The police and the city have my full support.’

Around 300 people initially joined the march through Bristol city centre yesterday, but tensions flared as numbers swelled to 1,000. 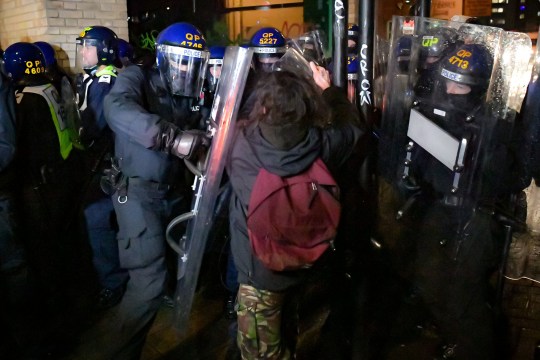 Police officers move in on demonstrators in Bristol on Friday night (Picture: PA) 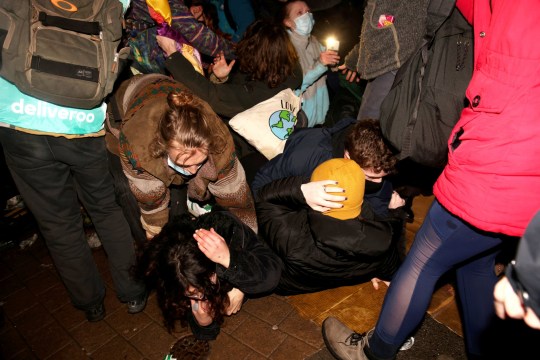 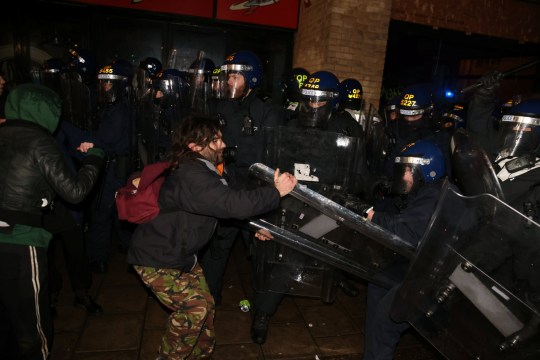 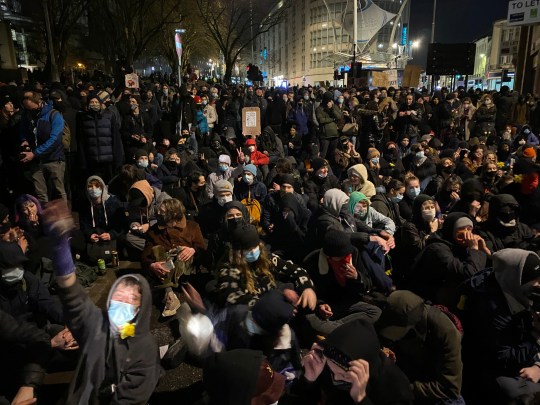 Peaceful demonstrators sit to protest a bill to give officers more power to impose conditions on non-violent protests (Picture: EPA)

Some protesters shone laser lights into officers’ faces, as cops wearing helmets and holding shields moved in to disperse crowds after 10pm.

A number of officers have come under fire after videos appeared to show protesters being hit with shields, sending some tumbling to the ground.

Daily Mirror journalist Matthew Dresch has claimed he was battered as he yelled he was a member of the press.

He tweeted: ‘Police assaulted me at the Bristol protest even though I told them I was from the press. I was respectfully observing what was happening and posed no threat to any of the officers.’

A spokesperson for Avon and Somerset police said they were ‘making efforts to contact’ Mr Dresch.

They added: ‘A free press is a cornerstone of our democracy & we fully respect the media’s vital role in reporting events fairly & accurately.’

The proposed Police, Crime, Sentencing and Courts Bill would give police in England and Wales more power to impose conditions on non-violent protests, including those deemed too noisy or a nuisance – with those convicted liable to fines or jail terms.

Twelve people were arrested in connection with another ‘Kill the Bill’ protest held last Sunday, after it descended into rioting, with 500 people marching on Bridewell police station.

The force said officers were attacked, police vehicles were set on fire and the windows of a police station smashed.

Another 15 arrests were made at a protest on Tuesday night as police and protesters clashed once again.

Superintendent Mark Runacres told BBC Breakfast this morning the force is preparing for more protests over the coming days.

He added that changes in legislation on Monday will allow the force to engage more effectively with protest organisers.

When asked if there was any information to suggest disorder could erupt again, Mr Runacres replied: ‘It is a concern for us, it is something that we are preparing for.

‘From Monday, changes in the legislation will allow us, hopefully, to engage effectively with protest organisers, which is what we have always done previously prior to the legislation changes around the Covid regulations stopping that happening.’

Cheap patio garden furniture for under £100