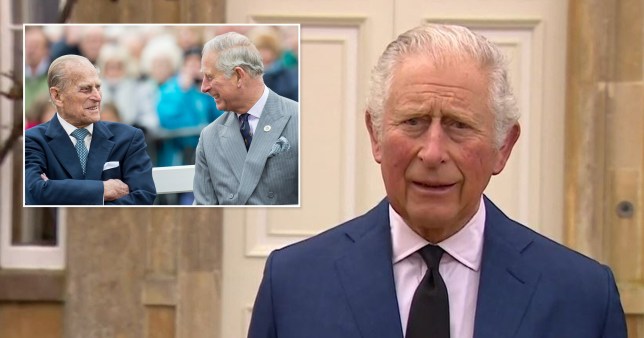 Prince Philip would have been ‘so deeply touched’ by the outpouring of grief across the nation, his son Prince Charles said (Picture: PA/BBC News/Getty Images)

Prince Charles has described his ‘dear papa’, the Duke of Edinburgh, as ‘very special person’ in a moving tribute from his Gloucestershire home.

The Prince of Wales said Prince Philip would be ‘so deeply touched’ by the outpouring of sorrow across the nation since his death aged 99 on Friday.

In a short statement, he said: ‘My father for I suppose, the last 70 years, has given the most remarkable, devoted service to the Queen, to my family, and to the country and also to the whole of the Commonwealth.

‘And as you can imagine, my family and I miss my father enormously – he was a much-loved and appreciated figure, and apart from anything else.

‘I can imagine he’d be so deeply touched by the number of other people here and elsewhere around the world in the Commonwealth who also, I think, share our loss and our sorrow.

‘And my dear Papa was a very special person who I think above all else would have been amazed by the reaction and the touching things that are being said about him and from that point of view we are, my family, deeply grateful for all that – it will sustain us in this particular loss and at this particularly sad time.’

It comes after details for Prince Philip’s funeral were revealed this afternoon.

“My dear Papa was a very special person…”

Prince Charles made a short statement outside Highgrove House this afternoon to mark the passing of his father, the Duke of Edinburgh. pic.twitter.com/fDSpYdGV3M 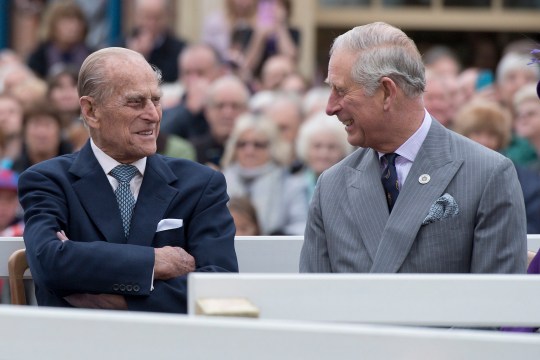 The Royal Family is ‘deeply grateful’ for the ‘touching things being said’ about the late duke (Picture: Getty Images)

A national minute’s silence will take place when it starts at 3pm.

Prince Harry will attend the funeral, returning to the UK for the first time since he stepped down for good as a senior royal.

However, his pregnant wife Meghan Markle will miss the ceremony after being advised by her doctor not to travel.

Royal experts have said Harry’s homecoming may help mend the family rift after the Duke and Duchess of Sussex’s explosive Oprah Winfrey interview.

A Palace spokesman said the Royal Family hoped the coming days would be seen as a chance to celebrate the duke’s ‘remarkable life’.

They have asked people who wish to pay their respects in person to stay at home instead amid the Covid pandemic.

The Palace spokesman said: ‘While there is sadness that the public will not be able to physically be part of events to commemorate the life of the duke, the royal family asks that anyone wishing to express their condolences do so in the safest way possible and not by visiting Windsor or any other royal palaces to pay their respects.

‘The family’s wish is very much that people continue to follow the guidelines to keep themselves and others safe.

‘His Royal Highness’s funeral will be broadcast to enable as many people as possible to be part of the occasion, to mourn with us and celebrate a truly extraordinary life.’