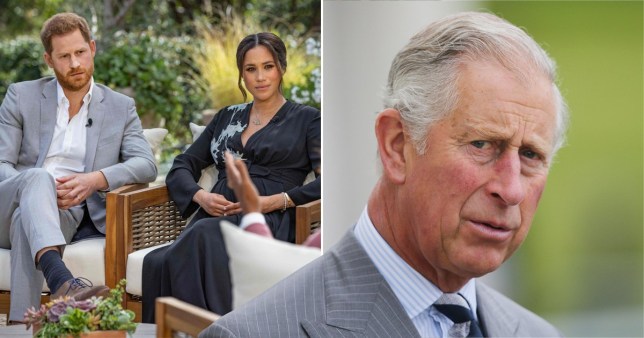 A royal biographer said Prince Charles would have helped the Royal Family to respond ‘as a team’ (Pictures: Getty/PA)

Prince Charles will have ‘taken the lead’ on the Royal Family’s response to Harry and Meghan’s explosive interview with Oprah, a royal expert believes.

The Duke and Duchess of Sussex made a series of shocking claims in the TV appearance, including that a member of the family had ‘concerns’ about the colour Archie’s skin would be, and that the ‘firm’ had ignored Meghan’s plea for help when she had suicidal feelings.

In a statement, Buckingham Palace said the whole family was ‘saddened’ by the ‘serious allegations’ which will ‘be addressed by the family privately’ – although added that ‘recollections may vary’.

Royal biographer Robert Jobson says he thinks the Prince of Wales will have been in charge of the Royal Family’s response.

He told Hello! Magazine: ‘The Queen is 94 and the Duke of Edinburgh is incapacitated, so he will be trying to placate and learn lessons from this so something can be worked out to everyone’s satisfaction.’

The expert has claimed the Royal Family ‘like to do things as a team’ and will ‘react as a unit and a family’ when ‘the team is being trashed’.

It comes after US chat show host Gayle King revealed Harry had spoken to Charles and William since the interview but ‘no one has spoken to Meghan’.

Speaking to CBS, she said: ‘Well, I did actually call them to see how they are feeling, it’s true, Harry has talked to his brother and his father, too.

‘The word I was given was, those conversations were not productive. But they are glad they at least started a conversation.’

The Duke of Cambridge is the only royal to comment on the allegations, telling the press: ‘We are very much not a racist family’.