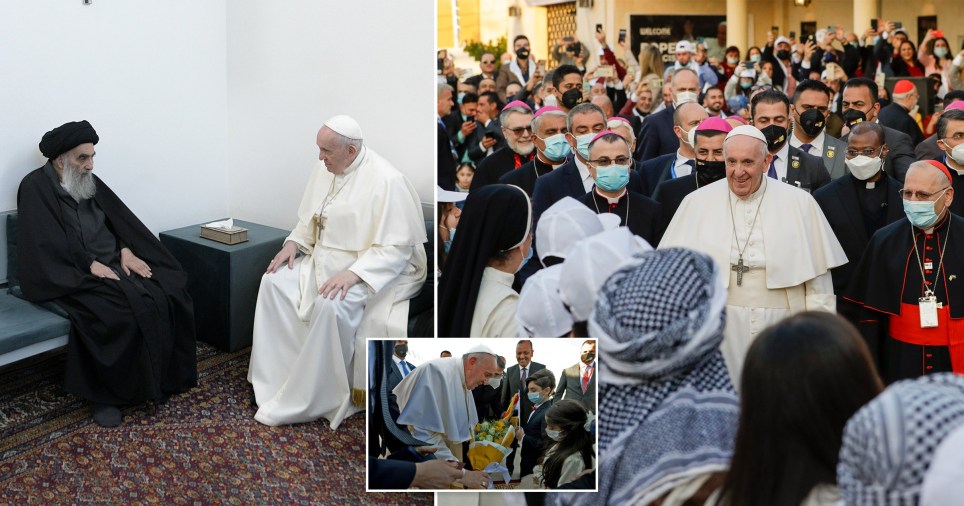 Pope Francis condemned violence in the name of God as ‘the greatest blasphemy’ during his historic visit to Iraq, where he met with the country’s top Shia cleric.

The Pope sat down with Grand Ayatollah Ali al Sistani at his humble home in the holy city of Najaf on Saturday.

After arriving in a bullet-proof vehicle, a number of white doves were released as he stepped into the doorway, reflecting the themes at the heart of his four-day visit – peace, reconciliation and inter-faith dialogue.

The meeting is the first of its kind between two such senior leaders in the Christian and Muslim world and was seen as highly symbolic.

An official Vatican photo showed the ayatollah in his traditional black robe and turban sitting across from Francis, in his white cassock.

Al Sistani, 90, is a deeply revered figure in Shia-majority Iraq and his rare but powerful political interventions have helped shape the country in recent years.

After the meeting, which lasted about 45 minutes, al Sistani called on world religious leaders to hold great powers to account and for wisdom and sense to prevail over war.

He added Christians should live like all Iraqis in peace and coexistence. 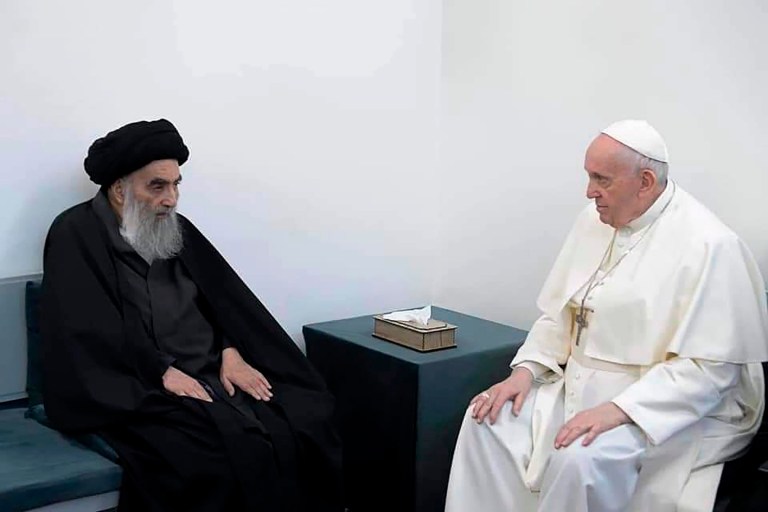 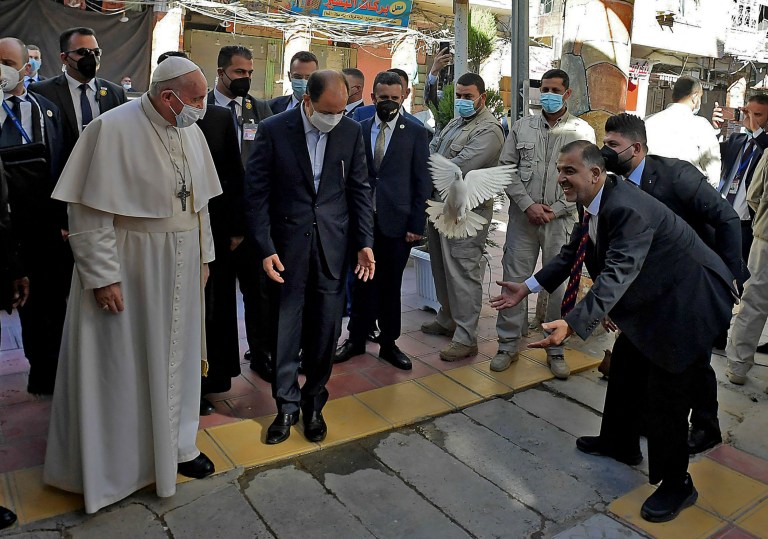 Doves were released as Francis was welcomed upon his arrival (Picture: AFP via Getty) 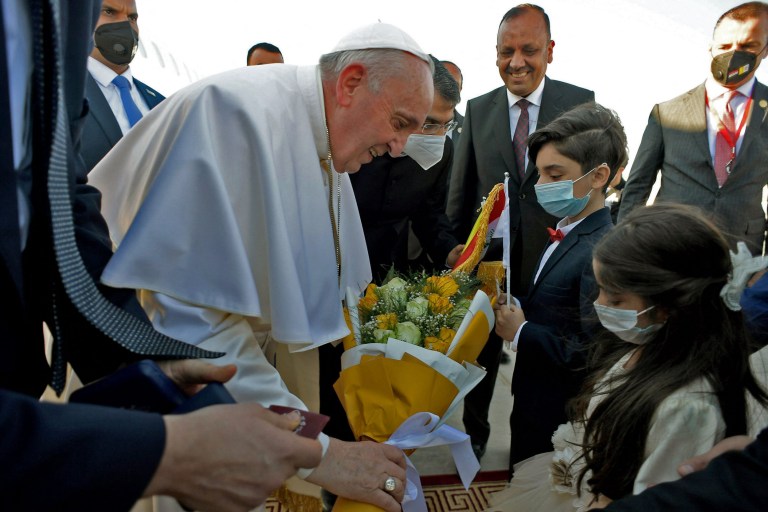 The pope was also greeted with flowers (Picture: AFP via Getty)

In a statement, he said: ‘Religious and spiritual leadership must play a big role to put a stop to tragedy … and urge sides, especially great powers, to make wisdom and sense prevail and erase the language of war.’

Francis also called for religious communities to work together, with the Vatican saying in a statement: ‘(He) underlined the importance of collaboration and friendship between religious communities so that, by cultivating mutual respect and dialogue, we can contribute to the good of Iraq, of the region.’

Mustafa al-Kadhimi said in a tweet that it was ‘in celebration’ of Francis’ two events on Saturday, which he hailed as ‘historic’.

The 84-year-old pontiff later travelled to the ancient city of Ur for an interfaith meeting at the traditional birthplace of Abraham, the biblical patriarch revered by Christians, Muslims and Jews. 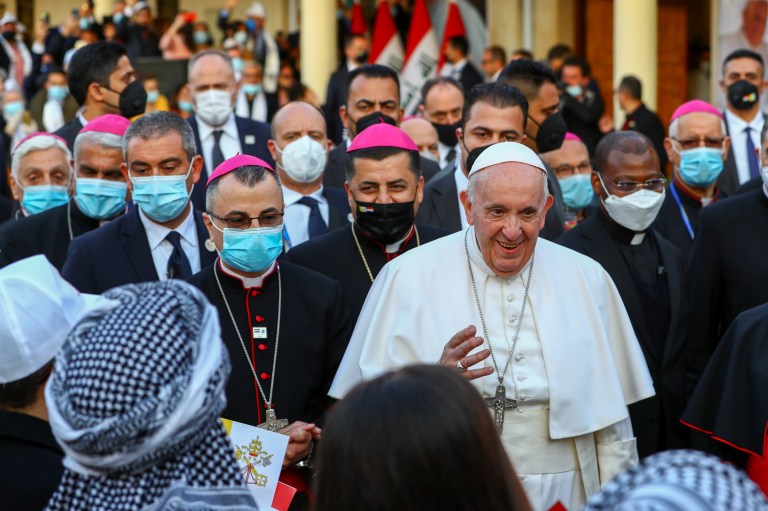 Francis walks between the crowd as he arrives to lead a mass at the Chaldean Cathedral of Saint Joseph in Baghdad (Picture: Reuters 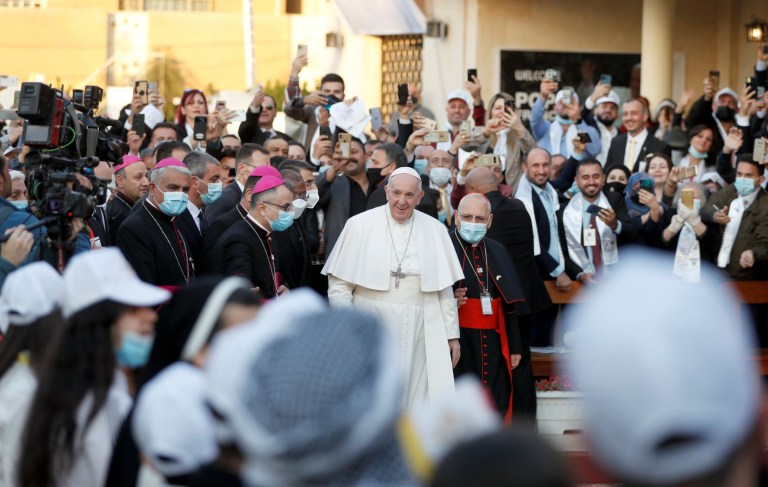 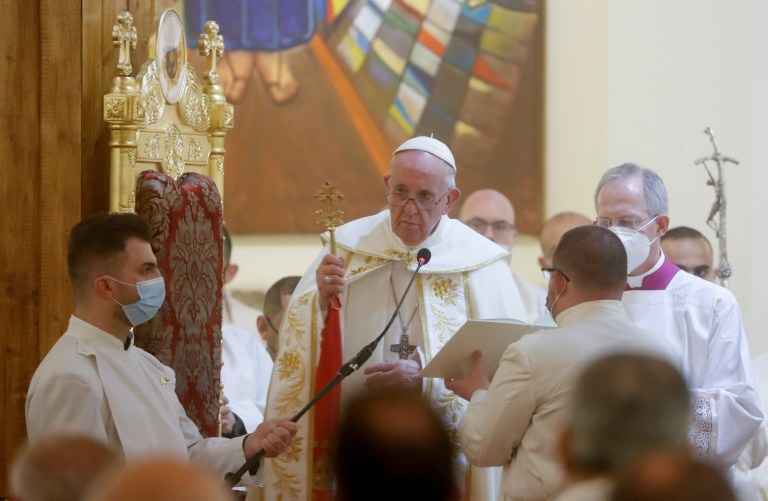 Francis held a mas at the cathedral (Picture: Reuters)

Francis said: ‘From this place, where faith was born, from the land of our father Abraham, let us affirm that God is merciful and that the greatest blasphemy is to profane his name by hating our brothers and sisters.

‘Hostility, extremism and violence are not born of a religious heart: they are betrayals of religion.’

The pope began his trip on Friday, flying into the country amid the tightest security ever seen for a papal visit.

Iraq has deployed thousands of security personnel to protect him during the tour, which comes after a spate of rocket and suicide bomb attacks and a surge in Covid-19 cases.

Francis said he was making the trip to show solidarity with Iraq’s devastated Christian community – which has fallen from around 1.5 million before the US invasion and the brutal Islamist militant violence that followed to about 300,000. 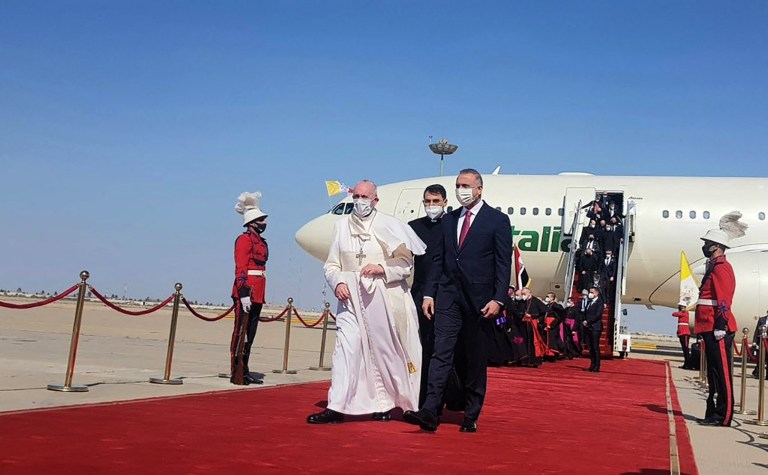 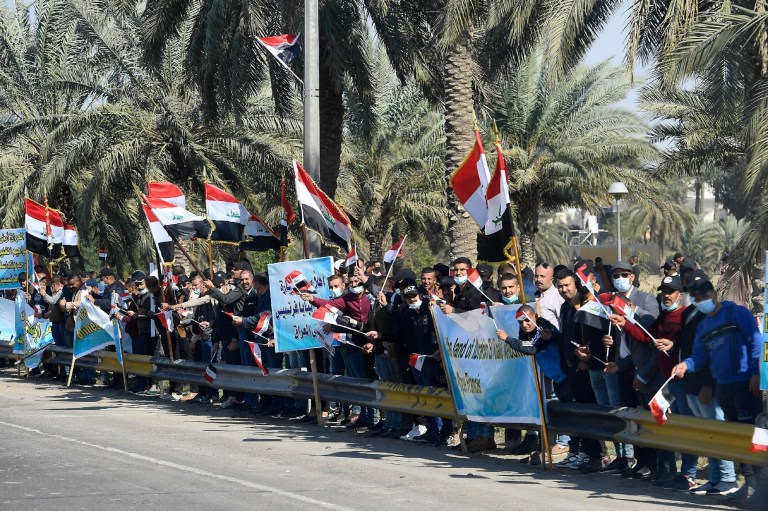 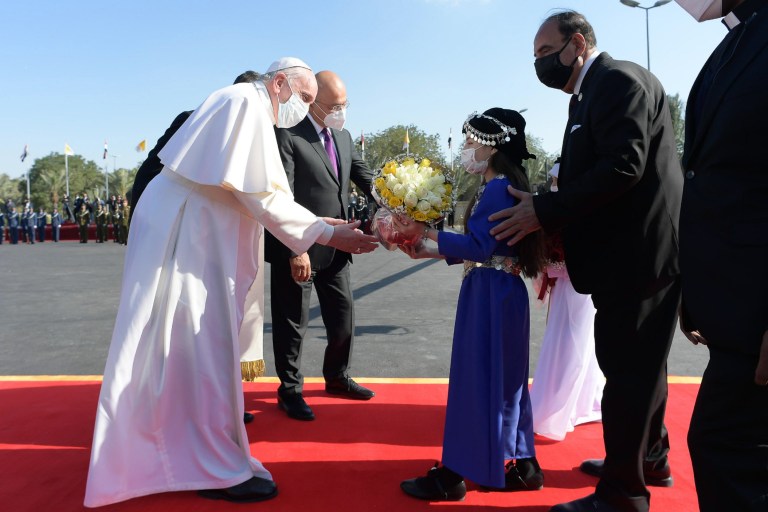 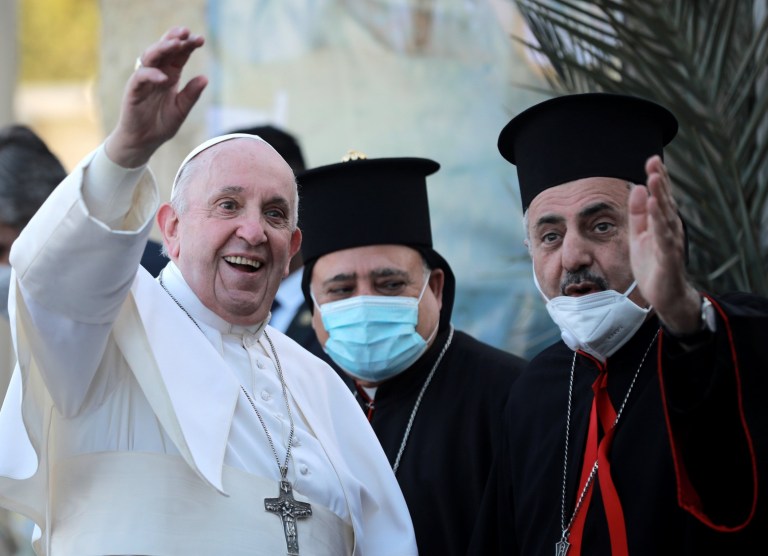 It is the first ever papal visit to the country (Picture: EPA) 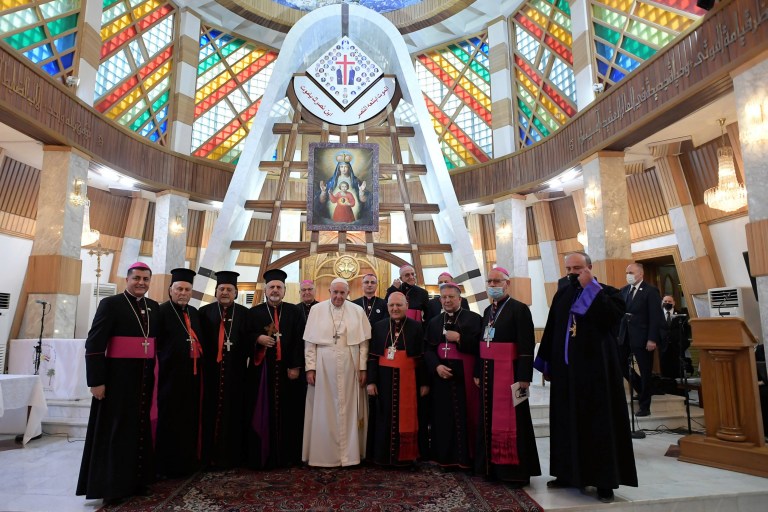 Francis meets with with bishops, priests, seminarians and catechists at the Syro-Catholic Cathedral of ‘Our Lady of Salvation’ (Picture: Reuters)

Francis paid tribute to ‘those of our brothers and sisters who here too have suffered prejudice and indignities, mistreatment and persecutions’(Picture: Reuters)

At Ur, Francis praised young Muslims for helping Christians repair their churches ‘when terrorism invaded the north of this beloved country’.

Later, in a homily at a Saturday evening service at Baghdad’s Chaldean Cathedral of Saint Joseph, Francis again paid tribute to ‘those of our brothers and sisters who here too have suffered prejudice and indignities, mistreatment and persecutions for the name of Jesus’.

Coronavirus restrictions limited the number of people allowed in the church to about 100, but they included the country’s president, foreign minister and the speaker of the house of parliament, all of whom are Muslim.

The pope, whose visit to Iraq began on Friday, will travel north to Mosul, a former Islamic State stronghold, where churches and other buildings still bear the scars of conflict, on Sunday.