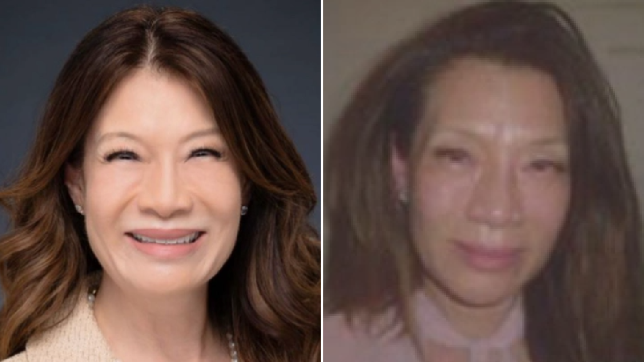 Hawaii State Representative Sharon Har was caught drink driving despite being instrumental in the creation of harsh new punishments for the offense (Pictures: Hawaii.gov/HawaiiNewsNow)

A politician who was instrumental in the creation of harsh new punishments for drink drivers drove the wrong way down a street while drunk, cops say. Sharon Har, a Hawaii state representative, careered the wrong way down the one-way street behind the wheel her Mercedes in Honolulu on February 22, it is alleged.

She was spotted driving erratically by police shortly after and pulled over. Sergeant Adam Lipka, who made the stop, wrote: ‘I observed her eyes to be red and glassy in appearance and her speech seemed to be slightly slurred.

‘While speaking with Har at her driver’s window with it fully down and about 3-4 feet from Har when I briefly lowered my face mask I could smell the odor of alcoholic beverages emitting from her breath and the interior of the vehicle.’

Har – who said she had just come from a restaurant – then refused to take a field sobriety test or breath test, the Honolulu Star Advertiser reported.

That means Har, a successful lawyer, will now be banned from driving for two years thanks to a 2008 law she was instrumental in creating after a serial drunk driver crashed into her in 2007.

In the wake of the smash – which saw a twice-convicted drunk driving 23 year-old slam into her Mercedes, Har devised the license ban, as well as a pioneering ignition ‘interlock’ system.

That sees drink drivers forced to blow into a special breathalyzer connected to their ignition, which will not start if they are deemed to be drunk.

The interlock may also take a photo of the driver as they blow, to stop them from getting someone else to do so.

Patrick McPherson, who helped Har push the changes in 2008, said: ‘She was the one that pushed it. She was the champion of it.

‘She was the person who introduced the legislation into the Legislature. She was the sponsor of the bill to require interlock.

‘At that point you were going to be revoked from driving or a first-time violation would require the use of the interlock.’

Caroline McNamee, from campaign group Mothers Against Drink Driving (MADD) said news of their longtime ally’s arrest was ‘painful.’ McNamee added: ‘Sharon Har helped us out. She knew what the rules were.’

MADD added that they were grateful no-one had been injured by Har’s drink-driving, and that she had driven the wrong way down an empty street.

Har, a married mother of two, has blamed the incident on mixing medication with beer.

‘This, in conjunction with my medication, contributed to my impaired driving.

‘I am extremely sorry for not anticipating the effect of this combination on my driving.

‘I deeply apologize to my constituents, friends, family and colleagues, and to the public for this failure on my part.’