Polio vaccine: When can babies get it and how long does it last?


Worried about Polio? Here is how to protect your children (Picture: Getty Images)

Many Brits may be concerned by the news that polio has been found in London sewage, leading to a national incident.

The disease was eradicated in the UK in 2003, with no recorded cases since the 1990s, thanks to vaccines.

Though the disease is rare and symptoms can be mild, it can be life-threatening and lead to life-long complications, according to the NHS.

Parents of unvaccinated children in London will be contacted by the NHS in a bid to contain the UK’s polio outbreak.

But when can babies get the polio vaccine, and how long are they protected for?

When can babies get the polio vaccine?

In the UK, polio vaccinations are usually done as part of a baby or child’s routine jabs.

However, people can receive a polio vaccine at any time and they are usually free through the NHS. 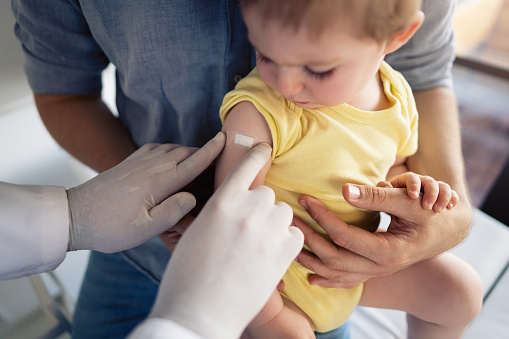 All children are offered the polio vaccine through the NHS (Picture: Getty Images)

The NHS website says: ‘You can have a polio vaccination at any point if you’ve never had one before, even if you’re not travelling to a country with a risk of getting polio.

‘You should also get vaccinated even if you’ve had polio before as it protects against different types of polio. It’s usually free.’

Alternatively, you can also pay privately for jabs that protect you from polio, diphtheria, and tetanus.

This may be needed for travel to a country where there’s a higher risk of catching polio.

How many Polio vaccines do you need to get?

Children receive three Polio vaccines during the first year of their life.

Babies at eight weeks, 12 weeks, and 16 weeks are vaccinated against polio as part of the 6-in-1 vaccine, which also protects from tetanus, whooping cough, diphtheria, and hepatitis B.

Your child will need to have all three of these vaccinations to be fully immunised against Polio. 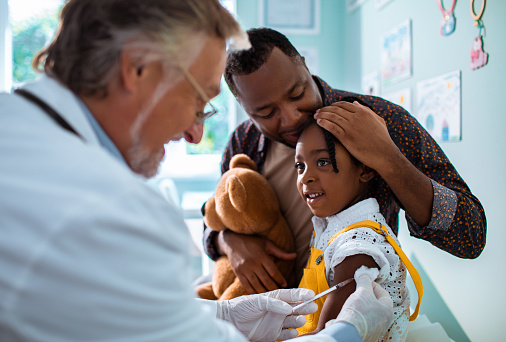 The best way to check you are up to date with polio vaccinations is to contact your GP, as your medical records will state whether or not you received the immunisations as a child.

How long are babies immunised for?

According to the Fit For Travel NHS website, children in the UK should receive the five necessary doses of the polio vaccine to have long-term protection.

It says: ‘Everyone should receive a minimum of five doses of a polio-containing vaccine to have good long-term protection. This should be documented in your medical notes held by your GP.

‘You can receive booster doses of polio-containing vaccines if you have not had all five doses.’

When do babies need a booster?

From the age of three years, four months, children get a four-in-one booster jab that covers polio, whooping cough, tetanus, and diphtheria.

A three-in-one booster is offered to teenagers aged 14.

This is often given in secondary schools, with parental consent, and is offered to homeschooled children.

If you do not complete the minimum five doses of the polio vaccines, you can still receive a booster.

What are the symptoms of polio in babies?

According to the NHS, most people who contract polio do not get symptoms.

Some people get mild, flu-like symptoms, such as:

Symptoms usually last up to 10 days.

While these symptoms may be mild, polio can cause long-term complications such as permanent paralysis, muscle weakness, problems with your joints, and swallowing difficulties.

Treatment for polio can include bed rest in hospital, pain killers, help with breathing, and regular stretches and exercises to prevent problems with your muscles and joints.