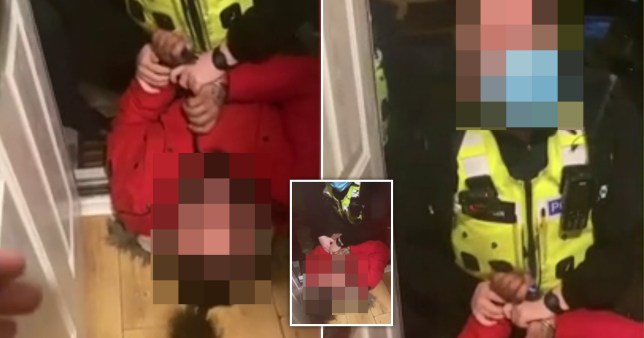 Video footage appears to show the officer hit this man as he lay on his back restrained (Picture: SWNS)

A police officer in the Midlands is being investigated after appearing to punch a handcuffed man in the face.

Footage of the incident on Tuesday night has been widely shared on social media, amid outrage about the officer using ‘excessive force’ on a member of the public lying on the ground.

West Midlands Police have confirmed they are investigating after a complaint was made about the officer. A 36-year-old man was arrested on suspicion of assault, criminal damage and resisting arrest.

The force said it had not passed the incident on to the Independent Office for Police Conduct (IOPC) but said its professional standards department was looking into it.

A spokesperson said: ‘A member of the public who was present has made an allegation that excessive force was used by one officer during the arrest. We’re aware of a video showing part of the incident has been shared on social media.

‘That video and complaint is being assessed by our professional standards department.’

The footage appears to show the officer justifying the alleged punch by saying ‘his hand ‘aint in the cuff’. Only one hand appears to be in handcuffs.

He also appears to put his hand on the man’s throat momentarily as the detained man tells him to ‘get the f*** off of me’.

Bystanders urge the man lying on his back not to resist as they criticise the officer for his actions.

The policeman adds: ‘He’s swinging his arms around, he’s already assaulted one person’.

The force spokesperson explained: ‘We were called to an address in East Croft Road, Wolverhampton, just after 7pm on February 16 to reports of a domestic incident where damage was being caused to property inside an address.

‘Soon after officers’ arrival, further disorder broke out and officers restrained a suspect.’

‘A 36-year-old man was arrested at the scene on suspicion of assault, criminal damage, and resisting arrest.

‘He was later released on bail while investigations continue.’

The Independent Office for Police Conduct (IOPC) told Metro.co.uk that it had not received a referral about the incident.