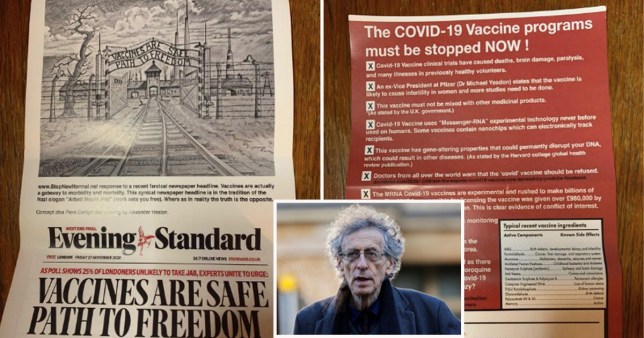 The leaflets were posted to homes in Southwark (Picture: Triangle News/Getty)

Anti-lockdown campaigner Piers Corbyn has designed a leaflet comparing the vaccine campaign for coronavirus to the Nazi death camp Auschwitz.

Mr Corbyn, former Labour leader Jeremy Corbyn’s brother, based the flyer on a headline in the Evening Standard which said: ‘Vaccines are the safe path to freedom’.

The posters show a drawing of the concentration camp gates, with the headline written there.

Written alongside the drawing is a direct comparison: ‘This cynical newspaper headline is in the tradition of the Nazi slogan “Arbeit Macht Frei (work sets you free)” whereas in reality, the truth is the opposite.’

The leaflets were posted throughout homes in Southwark, South London at the weekend.

They credit Piers Corbyn for the ‘concept’ and art by Alexander Heaton, who was charged with breaking Covid restrictions alongside Piers during protests in May. 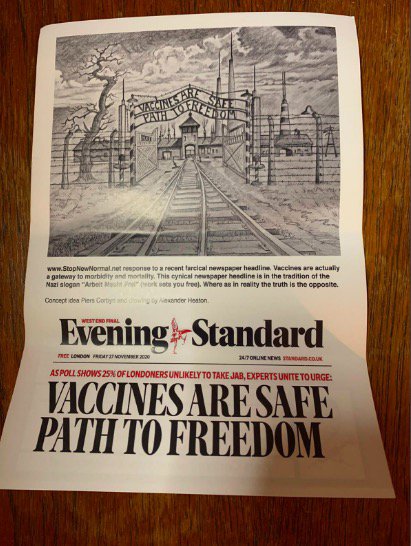 The leaflets were posted through letterboxes in London (Picture: Piers Corbyn/Twitter)

Labour Councillor for South Bermondsey Leo Pollak posted a picture of the leaflets on Twitter asking Piers Corbyn to confirm it was him who had posted them.

The leaflets falsely claim that ‘some vaccines contain nanochips which can electronically track recipients’.

Mr Corbyn confirmed to the Evening Standard that he had been involved with designing the leaflets.

He said: ‘A group of us came up with the idea. The Evening Standard was saying that vaccines will set us all free and it is not true.’

Asked whether the leaflets broke the law, he said: ‘Of course not.’

This rubbish was put through people’s doors in a part of London yesterday. Vile at any time, incredibly appalling coming the week of Holocaust Memorial Day. Shameful. pic.twitter.com/foXs5qlEw7

Anyone who had an anti-vaccine leaflet with hideous holocaust imagery on it delivered in #SE17 today, please report it on 101 or to the Met online: https://t.co/3A6t3voQ1r People shielding/isolating/staying home donât need crackpot conspiracy theorists knocking at their door. https://t.co/TlULh4CfCV

Stephen Silverman, Director of Enforcement and Investigations at Campaign Against Antisemitism said: ‘Piers Corbyn is an arch conspiracy theorist who was among the first to claim antisemitism allegations against his brother were part of an Israeli plot.

‘Comparing the lockdown to the Auschwitz death camp, as former BNP leader Nick Griffin and others have done, is despicable.

‘To deliberately distribute leaflets making that comparison is vintage Corbyn harassment and baiting of Jews, and demonstrates that this is not about protesting lockdowns, it is about trolling Jews.’

Meanwhile, Unite Against Fascism tweeted: ‘This rubbish was put through people’s doors in a part of London yesterday. Vile at any time, incredibly appalling coming the week of Holocaust Memorial Day. Shameful.’

Southwark Labour MP Neil Coyle posted on Twitter that he had asked the police to investigate the ‘Covid breach’.