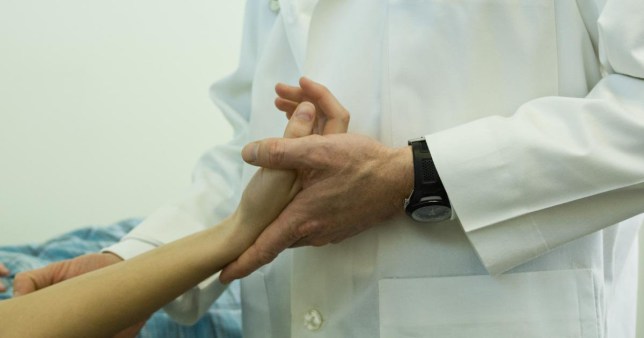 (Stock image) A patient was accused of being racist after she complained about her care (Picture: Getty)

A physiotherapist has been struck off after pinching the loose flesh on a woman’s arms and laughing at her ‘bingo wings’.

Andy Adigwe also told the patient that she looked good for her age and put her forearm on his lap with her hand near his groin, a disciplinary panel was told.

While working for Ashford and St Peter’s Hospital Trust in Surrey in March 2017, he asked her if he could touch her toes.

He then pinched and moved the flesh on her upper right arm and said: ‘It is bingo wings, that’s what this is, it is what they call this on women. It’s funny isn’t it? Bingo wings.’

He asked her ‘How is this for you? How does it feel for you?’.

He was fired after she complained about him in May 2017 and police became involved but no further action was taken.

He claimed that the patient was ‘unstable and racially motivated in her allegations’.

However, a Health and Care Professions hearing ruled the patient was telling the truth and Adigwe was struck off.

The panel said: ‘She denied also any mental health problems. Indeed, when giving her evidence, the Panel found [her] to be calm, measured and focused.

‘She considers his actions to be offensive, with the intention of establishing control and to humiliate her.

‘[As a result] she said that she is now reluctant to attend male professionals and that as a result of the comments made by [Adigwe], she is embarrassed about aspects of her appearance.’

The committee ruled that Mr Adigwe ‘breached fundamental tenets of the profession which include maintaining professional boundaries and treating patients with dignity and respect’.

The panel decided that its only option was to strike him off, due to the ‘nature and gravity of the concerns’.