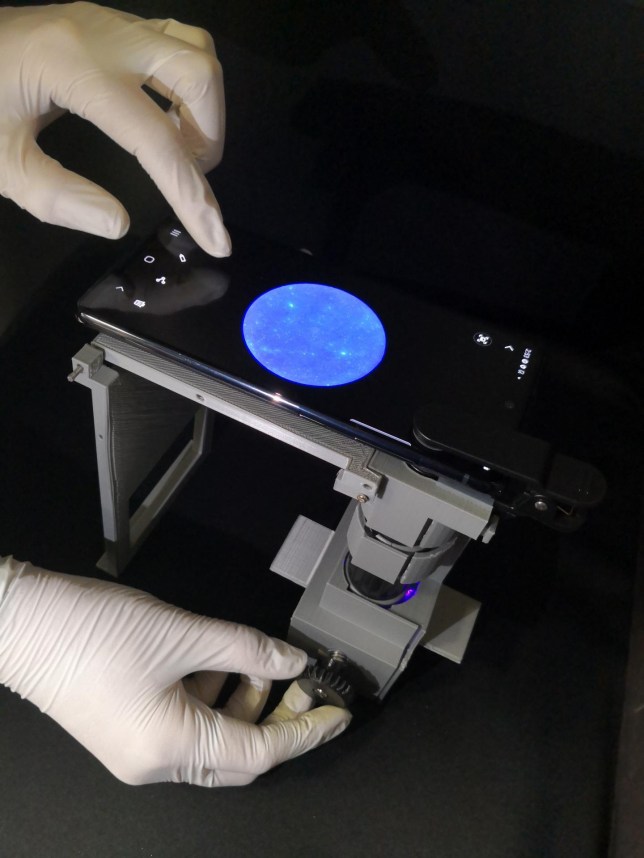 Scientists have built a smartphone app that can detect Covid-19 from a saliva sample in just 10 minutes.

When paired with a special microscope that can be fitted to a smartphone, the app analyses the sample for signs of the virus.

According to the team behind it, the idea is to combine the speed of an antigen test with the accuracy of a polymerase chain reaction (PCR) test.

It was originally developed as a way to scan for the norovirus but scientists at the University of Arizona realised it could be adapted for coronavirus.

The test works by adding a saliva sample to a wax-coated sheet called a microfluidic paper. This guides the sample through certain channels. After providing the sample, the patient adds antibodies with fluorescent beads.

If enough Covid-19 particles are present, the antibodies attach to each one.

‘Under a microscope, the pathogen particles show up as little clumps of fluorescent beads, which the user can then count,’ the researchers explained in the journal Nature Protocols.

According to the researchers, the whole process – adding beads to the sample, soaking the paper in the sample, then taking a smartphone photo of it under a microscope and counting the beads – takes 10 to 15 minutes.

‘I have a couple of friends who had COVID-19 that were super frustrated, because their PCR results were taking six or seven days or they were getting false negatives from rapid antigen tests,’ said Katie Sosnowski, a doctoral student in the university’s department of biomedical engineering.

‘But when they got the final PCR tests, they found out they had been sick, like they’d suspected.’ 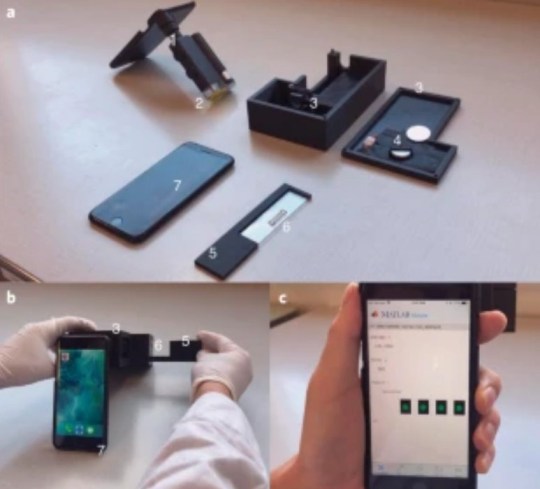 First proposed in 2019 to combat norovirus, the team modified the process for Covid. They added a 3D-printed housing for the microscope attachment and microfluidic paper chip.

A method called ‘adaptive thresholding’ was also introduced that uses artificial intelligence to set the danger threshold and account for differences in the kind of phone used, the quality of the paper and other factors.

‘We’ve outlined it so that other scientists can basically repeat what we did and create a norovirus-detecting device,’ said Lane Breshears, a doctoral student studying under biomedical engineering professor Jeong-Yeol Yoon, who led the research.

‘Our goal is that if you want to adapt it for something else, like we’ve adapted it for Covid-19, that you have all the ingredients you need to basically make your own device.’

Other researchers have made similar pivots.

A team at the University of Utah developed a sensor that attaches to a phone that can tell from saliva if someone is infected in 60 seconds.

That was originally built to fight the Zika virus but has since been adapted to help in the fight against Covid.