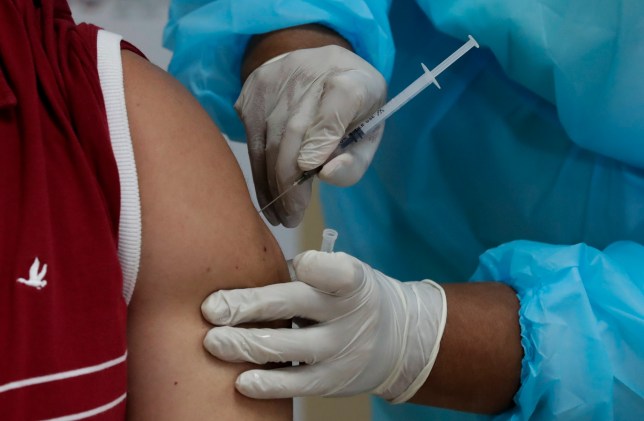 The results of the study give a boost to the UK’s policy to delay second doses (Picture: AP)

The first dose of the Pfizer/BioNTech Covid vaccine is 85% effective, a study of Israeli healthcare workers shows.

The research was conducted on more than 7,000 hospital staff who were vaccinated at the Sheba Medical Centre in Tel Aviv.

Scientists observed an 85% reduction of symptomatic Covid-19 between 15 and 28 days after giving workers the jab.

Including asymptomatic cases, there was a 75% drop in infections.

Professor Eyal Leshem, an infectious disease expert and director of Sheba’s Institute for Travel and Tropical Medicine, told Sky News: ‘This is first real-world evidence of effectiveness that shows up after the first dose of the vaccine.

In a boost to the UK Government’s vaccine policy, it added that this supports ‘delaying the second dose in countries facing vaccine shortages and scarce resources, so as to allow higher population coverage with a single dose’.

However it said more research is needed on the long-term effectiveness of a single dose ‘to inform a second dose delay policy’.

In December, ministers said second doses would be given within 12 weeks rather than three in order to inoculate as many people as possible with one jab. 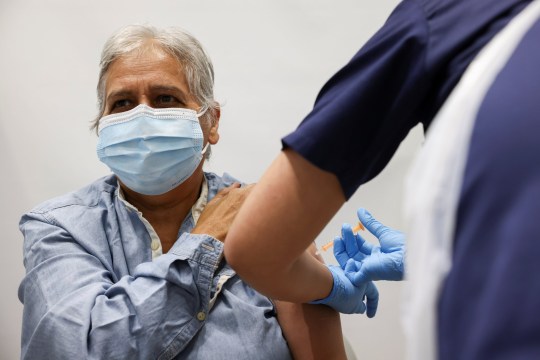 One dose of the Pfizer vaccine is 85% effective, a study on Israeli health workers shows

The Israeli study looked at the effectiveness of the jab up to four weeks but Professor Leshem said it’s a fair assumption that efficacy would be maintained beyond that period.

‘The physiology of the vaccine is that immunity doesn’t wane very quickly after receiving a dose,’ he said, adding that protection actually gets better later on, between three and four weeks after getting the jab.

‘It is possible that after week four, protection is even better 85%,’ he said.

‘It still needs to be tested, and it will be better tested in the UK where there are more persons that received only one dose.’

Pfizer said in a statement it was doing its own analysis of ‘the vaccine’s real-world effectiveness in several locations worldwide, including Israel’.

It comes after The Telegraph reported that one dose of the Pfizer and Oxford/Astrazeneca vaccines can cut infections and transmissions by two-thirds.

The data is being handed to Boris Johnson, who is finalising his roadmap out of lockdown with an announcement expected on Monday.

Wales plans to ease lockdown with schools back on Monday, shops and hairdressers open in mid-March, and hols at Easter

The 13 areas where Covid cases are still rising