Buckingham Palace is unfair to investigate bullying claims against Meghan Markle before her Oprah interview when it has kept ‘dead silent’ on allegations concerning Prince Andrew, the author of an unauthorised royal biography has claimed.

Omid Scobie, who wrote Finding Freedom: Harry And Meghan And The Making Of A Modern Royal Family, has admitted he saw staff ‘frazzled and frustrated’ as they became ‘caught in the middle’ – but says he was never privy to bullying allegations during his time within the royal fold.

It’s the right thing to do to launch an investigation into the 2018 claims – but it feels like the ‘playing field is slightly uneven’ after the palace treated the Duke of York differently, he claimed.

While the London-based writer doesn’t know the exact contents of the Oprah chat, he believes viewers will get an insight into the ‘warm’ relationship the couple has with the Queen and the Duke of Edinburgh.

Speaking on Friday, Mr Scobie said told ITV’s Good Morning Britain: ‘Of course, I have spoken to people close to the couple who, of course, have reacted to the accusations of bullying.

‘I think there’s a sense of sadness in Team Sussex at the moment because, of course, a lot of these stories are so far removed from what the couple feel their experience was within the institution.’

He added: ‘I’d spent a lot of time getting to know the people that were working closely to them, and that’s through several generations of their various teams at Kensington Palace and Buckingham Palace.

‘I myself hadn’t come across stories of bullying. I’d seen people frazzled and frustrated by being caught in the middle of the Sussexes and the institution on a regular basis.

‘So, you know, I also understand that anyone’s experience, and what they share (of) their experience during employment … needs to be heard, and so, of course, like any responsible business there has to be an investigation.

‘But, at the same time, it is an unprecedented moment for the Palace to announce to the entire world that there will be an HR investigation. You know, this is the institution that has remained dead silent about all of the Prince Andrew accusations.

‘“No comment” was the words given to me time and time again when I asked more questions about the allegations against Prince Andrew and his lack of co-operation against the FBI.

‘When Harry and Meghan accused, or were suspicious, of staff leaking stories to the British tabloids, again, their complaint fell on deaf ears. So, it does feel like we have a slightly uneven playing field here. If there are internal investigations, they need to happen across the board.’

In 2019, Virginia Roberts – now Virginia Giuffre – claimed she was trafficked and forced into sex with the Duke of York in 2001 and 2002. The father-of-two has ‘categorically’ denied the allegations.

A statement from Buckingham Palace in November 2019 announced Andrew was suspending his public duties ‘for the foreseeable future’.

Mr Scobie’s co-author Carolyn Durand has claimed the ‘double standards’ were something Meghan had ‘really struggled with’ and ‘her friends were concerned about her’.

In his interview with GMB, Mr Scobie said the two-hour Oprah special is ‘being kept under lock and key’, adding ‘absolutely no-one’ knows exactly what will be said. 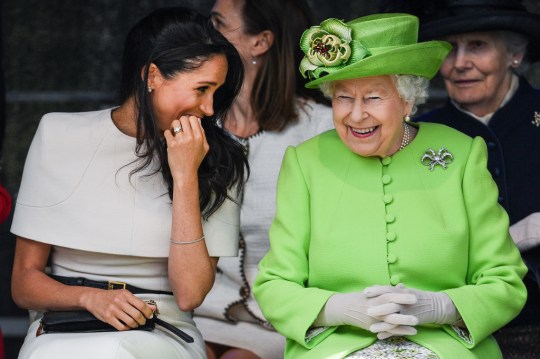 Queen Elizabeth II laughs with Meghan, Duchess of Sussex during a ceremony to open the new Mersey Gateway Bridge in 2018 (Picture: Getty Images)

A clip of the show sees the duchess claim she cannot be expected to ‘just be silent’ as the Royal Family ‘plays an ‘active role in perpetuating falsehoods’ about her.

Another released today sees her claim the palace banned her from doing an interview with Oprah before her wedding to Prince Harry.

However, Mr Scobie said a distinction must be made between the ‘machine of the monarchy’ and the Queen.

He said: ‘I think people will be really surprised to hear more stories about that warm relationship on the interview with Oprah.

‘You know, when Harry and Meghan talk about the firm or the institution, they’re not attacking the royal family.

‘They’re talking about the machine of the monarchy, that’s what goes on behind the scenes, and I think any royal family member is able to distinguish the two.’

Is Bradley Walsh leaving The Chase?

Lockdown roadmap: Key dates for rules lifting and when it could end