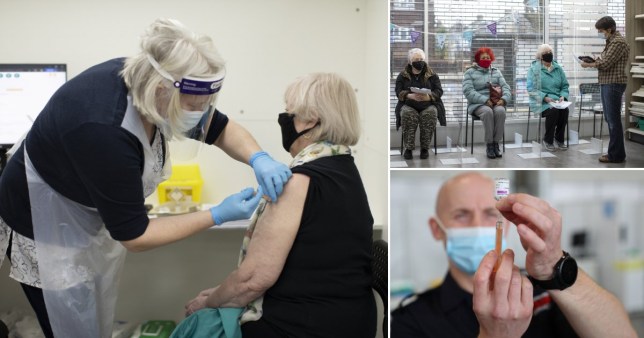 There is concern at the rate of vaccine uptake among some groups (Picture: PA/Getty)

Ministers have launched a fresh drive to encourage anyone aged 70 and over who has not yet had their coronavirus vaccine to come forward and book one.

The Government is confident its target of offering a jab to the 15 million most vulnerable will be met by Monday’s deadline.

But there is concern at the rate of vaccine uptake among some groups, including some ethnic minorities.

Health Secretary Matt Hancock said he hoped a combination of vaccines and new treatments will mean Covid-19 could be a ‘treatable disease’ by the end of the year.

He issued a direct appeal to anyone over 70 who has still not had the jab to contact the NHS over the weekend to book an appointment.

Mr Hancock said: ‘I am determined that we protect as many of our country’s most vulnerable people from this awful disease as soon as possible.

‘Vaccines are the way out of this pandemic.’

He told The Daily Telegraph: ‘I hope that Covid-19 will become a treatable disease by the end of the year.

‘If Covid-19 ends up like flu, so we live our normal lives and we mitigate through vaccines and treatments, then we can get on with everything again.’

Overall, uptake of the vaccine has been high, with the Department of Health and Social Care (DHSC) reporting a 93% take-up rate among the over 75s in England.

The DHSC is now seeking to work with community organisations and charities in England to address the concerns that are making some reluctant to get the jab, while seeking to dispel ‘myths’ circulating on social media.

At the same time it is looking to raise awareness of how the vaccines are being made generally available, especially among ethnic minorities, homeless people, asylum seekers and those with disabilities.

Around 30 ministers are taking part in visits and virtual meetings, including Home Secretary Priti Patel and Vaccines Minister Nadhim Zahawi.

Mr Zahawi said: ‘We recognise that some groups feel more hesitant about getting a jab, or have more barriers, both physical and mental, preventing them from accessing one when it’s offered.’ 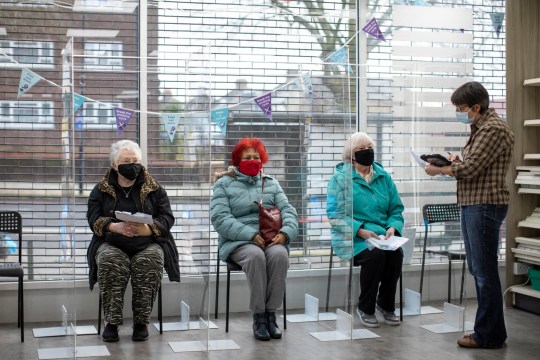 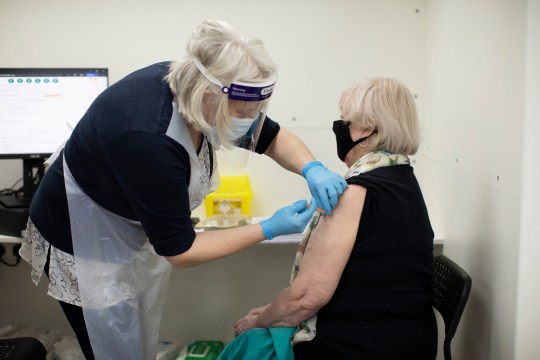 More than 14.5 million people across the UK have now received their first dose of one of the approved vaccines.

NHS England said the top four priority groups in England – people aged 70 and over, care home residents and staff, health and care workers and clinically extremely vulnerable patients – ‘have now been offered the opportunity to be vaccinated’, while Wales said those groups had already been reached.

People aged 65 to 69 in England can now get a vaccine if GPs have supplies, while Welsh First Minister Mark Drakeford said they had already begun contacting some over 50s.

Scotland’s First Minister Nicola Sturgeon has said she expects many in the 65 to 69 age group to have had their first jab by the middle of this month after the vast majority of older people were vaccinated.

In Northern Ireland, the Department of Health is offering everyone over 65 a vaccine by the end of February as it works its way through priority groups four and five, although it is expected to help the UK meet its overall target.

It comes as the reproduction number, or R value, for coronavirus dropped below 1 for the first time since July and is now estimated to be between 0.7 and 0.9 across the UK.

As of February 9, the latest date for which figures are available, there were 25,621 patients in hospital in the UK with Covid-19 – down from a peak of over 39,000 in mid-January.

The figures are likely to intensify the pressure on Mr Johnson from some Tory lockdown-sceptics to begin easing restrictions and re-opening the economy.

Reports suggested that pubs and restaurants could begin re-opening for outdoor service in April if infections continue to fall.

However, scientists advising the Government continue to urge caution, arguing that case numbers remain too high to allow any significant easing of the controls. 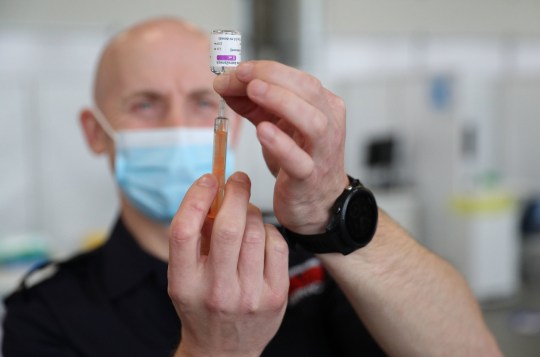 A dose of the Oxford/AstraZeneca coronavirus vaccine is prepared by a member of the Hampshire Fire and Rescue Service at Basingstoke fire station (Picture: PA)

Meanwhile, the DHSC said treatments for Covid-19 will soon be fast-tracked through the UK’s clinical trial system, meaning they could be available on the NHS in months rather than years.

The Government, which currently funds phase two and three trials such as the Recovery trial, which brought dexamethasone and tocilizumab to the NHS, has awarded multimillion-pound funding to a phase one clinical trial platform.

Phase one trials, usually arranged by researchers, are the earliest stage of human trials that ensure treatments are safe and show a signal of benefit in treating a disease.

The funding has been awarded to expand the Agile clinical trial platform and will allow for the progress of cutting-edge treatments for Covid-19 through all three clinical trial phases in the UK – a streamlined process that is hoped to protect the supply chain.