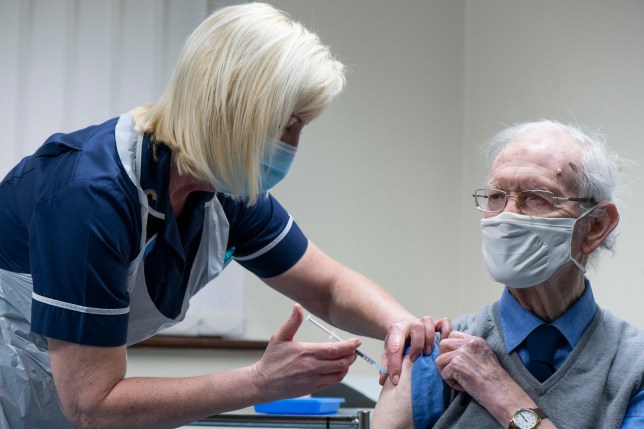 A patient is given the Oxford AstraZeneca vaccine at Pontcae Medical Practice in Merthyr Tydfil, Wales (Picture: Getty)

People aged 70 and over will begin receiving booster jabs from September to protect them against new coronavirus variants, the vaccines minister has revealed.

The first top-up doses will be given to those in the top four priority groups during the initial rollout – which included the over-70s along with frontline NHS and social care staff.

Speaking to The Telegraph, Nadhim Zahawi also outlined the Government’s hope to have up to eight vaccines available by the autumn, including one that could give protection against three different strains.

His comments come ahead of the first stage in easing lockdown rules on Monday, when people will be allowed to meet outdoors in groups of six or two households.

Mr Zahawi also told the newspaper that plans were underway to open drive-thru vaccine centres to reassure people in their 30s, 40s and 50s who may be hesitant about getting their jab.

He said: ‘We did some fantastic pilots of drive-in jabs that went really well. And again, as we go down the cohorts in the current deployment you’re going to see more of that.

‘It’s a great way as you do the under-50s, the under-40s, under-30s. Convenience becomes a much greater tool to deploy because you want to make sure for those people, where we think there may be greater hesitancy, we make it as convenient as we can make it.’ 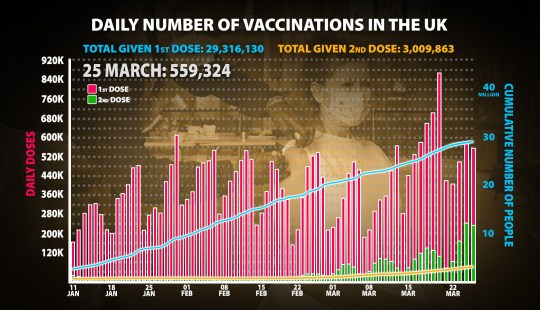 Over half the adult population has had a first dose of the vaccine (Picture: Metro.co.uk)

More than 29 million people have now had their first dose of one of the available vaccines – over half the adult population.

Of those, just over three million have gone on to have their second.

There are currently two vaccines being used in the UK, those developed by Pfizer and AstraZeneca. Doses of a third, made by Moderna, are expected next month.

Mr Zahawi told The Telegraph that ministers are in talks with those three companies about developing new versions of their jabs which would be more effective against mutant strains.

Eventually, UK regulators could approve up to eight vaccines, including one by Novovax which could guard against multiple strains in a single shot, the newspaper reports.

The Government said a further 70 people had died within 28 days of testing positive for Covid-19 as of Friday, bringing the UK total to 126,515.