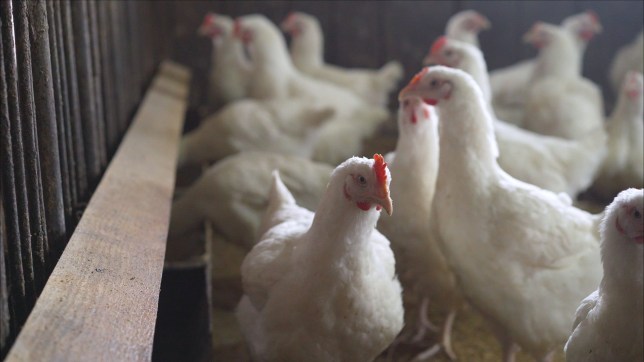 A dangerous strain of bird flu which can infect humans has been found on a chicken farm in east Staffordshire.

The Department for Environment, Food and Rural Affairs (Defra) confirmed on Monday that H5N8 had been detected in broiler chickens at the premises, located north of Uttoxeter.

That is a highly pathogenic strain avian influenza – meaning it leads to more severe disease in birds – but the danger to people is said to be ‘low’.

All of the birds on the infected farm will be culled, according to Defra, but the department did not say how many would be killed.

Other restrictions to limit the spread of the disease are in place within a 10km radius around the site.

A 3km protection zone – which appears to centre around the village of Ellastone – along with a wider 10km surveillance zone is in place to restrict the movement of poultry.

Human cases of H5N8 were reported to the World Health Organisation for the first time in February.

These images show what it’s like to live with dementia


The seven cases were all related to poultry workers in Russia.

However, PHE said that the risk of infection to the UK public is ‘low’ and anyone exposed to a confirmed H5N8 case will receive advice from a local health protection team.

The organisation’s trading standards manager Stephanie Young added: ‘Anyone with poultry in Staffordshire should be vigilant and look out for signs of avian influenza and maintain biosecurity measures.

‘If anyone has any concerns or needs further information, they should contact us straight away.’

Meanwhile, a low pathogenic strain of bird flu has been found at a turkey breeding farm in Cheshire.

A 1km ‘restricted zone’ is in place around the village of Tarporley to limit the disease’s spread and all birds on the infected premises will be culled, Defra said.

It is the latest in a host of outbreaks of different strains of bird flu around the country in recent months, including one which saw 30,000 turkeys culled in December after an H5N8 outbreak in East Anglia.