Petrol stations have had to shut after running out of fuel (Picture: Getty)

A third of the south’s petrol stations have run out of fuel due to protests over oil, a campaign group has claimed.

Fair Fuel UK Campaign said it has ‘credible intelligence’ that one in three stations in southern England have run out of petrol and or diesel, due to Just Stop Oil and Extinction Rebellion protests.

The government has said only one terminal was out of action on Sunday afternoon as a result of the action, while 338 arrests have been made since the protests began on 1 April – and another 26 arrests are expected to be made.

It comes after more than 20 protesters arrived at Exolum Storage in Grays on Sunday morning.

Assistant Chief Constable Glen Pavelin said: ‘We cannot stand by while criminal acts are being committed, and lives are being put at risk, in the name of protest. 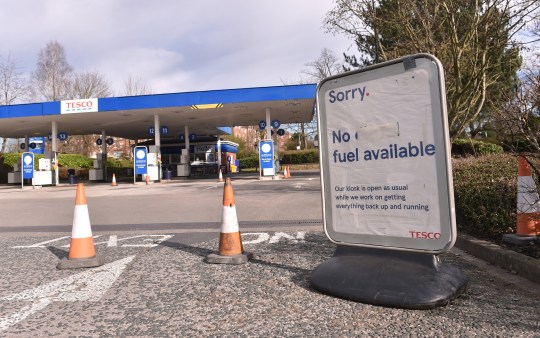 One in three petrol stations reportedly have shut down due to the protests (Picture: Getty)

‘We are not anti-protest.

‘Our job is to preserve life and catch criminals, and that’s what we’re going to do.

‘Today’s protest is exceptionally dangerous due to where the protesters have located themselves within the site.’

At the BP Kingsbury Terminal the group dug a tunnel and are holed up, trying to avoid police arrests, while 80 demonstrators swarmed the Buncefield and Grays terminals and locked themselves inside.

The group also claims to have dug a tunnel overnight under a key tanker route to the BP Kingsbury Terminal in Warwickshire and hid its efforts with a caravan.

‘The tunnel was concealed by a modified caravan parked on the roadside and surrounded by Just Stop Oil supporters’, they said in a statement.

‘Despite a number of police arrests, five people remain inside the caravan this morning working on the tunnel.’

At 2.30am, 40 campaigners approached the gates of the Buncefield oil terminal, followed by further action at 6.30am at Inter Terminals in Grays, Essex.