Some nurses were unhappy at their union’s decision (Picture: Getty)

The Royal College of Nurses stunned its members by moving its annual conference online over ‘serious allegations of sexual harassment’.

The union representing 465,000 health workers was due to hold its congress in Liverpool across three days from September 18.

Few details of the nature of the allegations were provided and it left nurses questioning whether cancelling the in-person event was necessary.

Learning disability nurse Catriona McIntosh said sexual harassment should be dealt with by the police.

Teresa McNally added: ‘If there are people who you consider high risk of committing such an offence surely those people should be excluded and reported to the police.

‘It’s astonishing that the only safe solution was to cancel conference.’

Others raised concerns the situation would overshadow the union’s campaign to secure a 12.5% pay rise for nurses.

But it was supported by a feminism group which highlighted a Nursing Times survey showing three in five nurses had suffered sexual harassment. 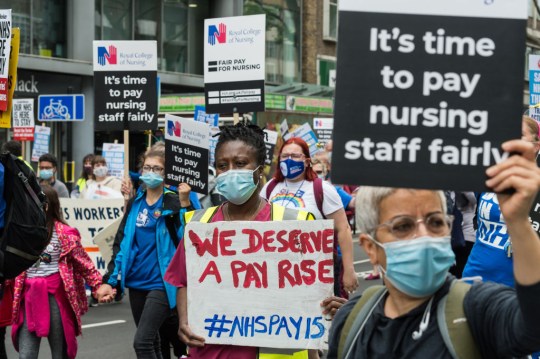 The RCN Feminist Network backed the move to ‘protect and safeguard members’ safety and wellbeing’.

The college said it received ‘independent legal advice’ and decided to ‘move this year’s meeting to a fully virtual event’.

RCN Council chair Carol Popplestone said: ‘We have acted fast and took a unanimous decision that protects all attendees.

‘We know that many members planning to attend were looking forward to seeing each other in person for the first time in two years.

‘But this decision was made with members’ safety at the top of our minds. That is what we are here to safeguard at all costs.

‘I am absolutely determined that Congress will still be its usual fascinating mix of debates, events and speeches.

‘Getting together virtually won’t stand in the way of that.’