Northumberland: Couple who fenced off home next to chip shop ‘shot at with air gun’

A row has erupted between a couple and a neighbouring chippie after customers kept loitering on their doorstep (Picture: SWNS)

A couple who erected a fence to protect themselves from errant fish and chip eaters have been shot at with an air gun as the row turned increasingly ugly.

Stephen Williams, 57, and wife Christine, 50, say a man appeared next to their home in Alnwick, Northumberland and ‘pointed a gun at them’ on Thursday.

He fired and hit a wall, according to the couple. Police say they have arrested a 34-year-old man in connection with the incident.

Just a day after the shooting, council workers turned up at the house, which is a former sweet shop, and took down the fence because it was blocking a pavement.

The row started when the couple took matters into their own hands after months of complaining about customers from the next door chippie who were loitering on their property.

During the Covid lockdown, queues had stretched out the door due to social distancing and people were hanging around outside the house and peering through the windows.

The couple say the fence has been built on land they own but this is disputed and it is partially blocking a lay-by and forcing people to walk on the road.

Councillors claim the barrier was put up prematurely before officers resolved the legal questions over ownership. 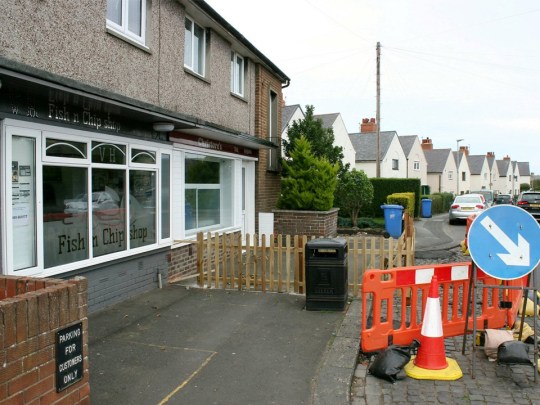 Customers from the shop had been queueing into the Williams’ front garden (Picture: SWNS)

A furious Christine said she and her husband plan to ‘put the fence right back up again’, MailOnline reports.

Speaking about the attack, she said: ‘The whole thing has left me traumatised. On Thursday, after we’d both got back from work my husband went outside to work on the fence and I was sitting in a chair at the front keeping him company along with our dog.

‘Suddenly I saw a man on the other side of the road with a gun pointing directly at me. I screamed at Stephen who moved me away as the shot was fired.

‘Then we heard cheers coming from the chip shop. It was terrifying. I am really shaken up by the whole thing. We had forensics round here until the early hours of the morning.’ 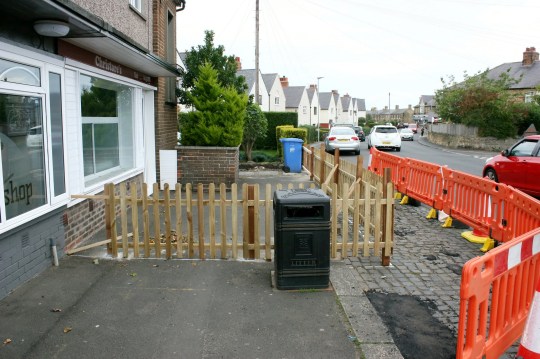 The fence blocked the pavement and part of a lay-by (Picture: SWNS)

Stephen and Christine decided to convert their old shop into a home when they closed it down and changed careers in 2019.

They say they have proof their property’s boundary ‘extends from the front of the shop onto the pavement’ after they stopped a broadband company from digging up the road in 2017.

Christine added: ‘They had no right to take the fence down and my husband will put it back up again because we are entitled to mark our boundary.’

A spokesperson for Northumberland Police confirmed the incident with the air gun. 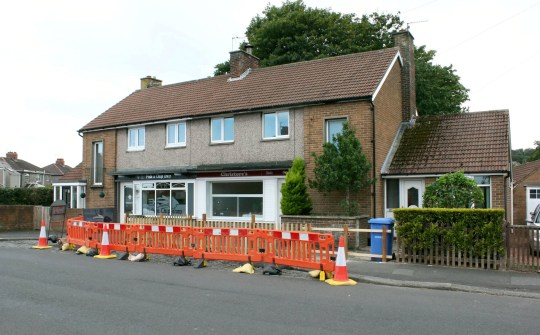 The row turned ugly when the couple were threatened with a gun (Picture: SWNS)

They said: ‘Shortly before 6.50pm yesterday police received a report of concern for safety following a disturbance on Victoria Crescent in Alnwick.

‘It was reported that two parties had been involved in a dispute, during which an air weapon had been discharged at a wall.

‘No one was injured but as a precaution, officers from the Force’s Firearm’s Support Unit (FSU) attended the scene.

‘A man, aged 34, was arrested and remains in custody at this time, helping with enquiries.

‘There is no threat to the wider public at this time and it is believed all those involved are known to each other.

‘Officers remain in the area today carrying out patrols so anyone with concerns should make themselves known.’

“I will always be jealous of Nirvana’s ‘Nevermind'”