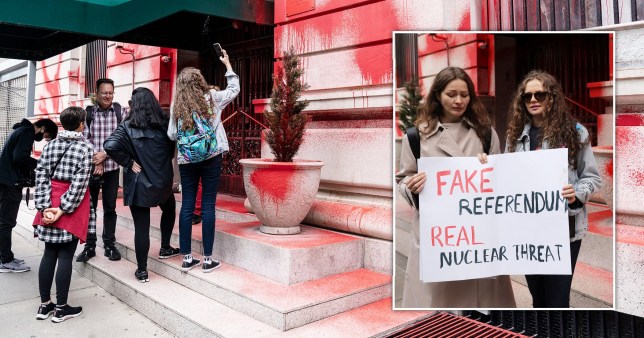 People gathered outside the consulate this morning to take photos and show support for Ukraine (Picture: Getty Images/Rex)

Russia’s consulate in New York was heavily vandalised hours after Vladimir Putin announced his attempted annexation of a vast swathe of Ukraine.

Photos from the scene showed the Manhattan building had been daubed in red paint overnight.

It’s the latest in a string of protests to hit properties linked to the Kremlin in response to the war in Ukraine.

There has been international outrage at Vladimir Putin’s attempted seizure of four regions of Ukraine this week.

The Kremlin said it had absorbed Donetsk, Luhansk, Kherson and Zaporizhzhia into the Russian federation following sham referendums.

People left in occupied parts of Ukraine were intimidated into voting, often at gunpoint.

A large concert was held in Moscow’s Red Square yesterday to celebrate the move despite Russian forces being on the back foot in the battlefield.

He told crowds in Moscow: ‘We will do everything to support our brothers and sisters in new regions. Victory will be ours.’ 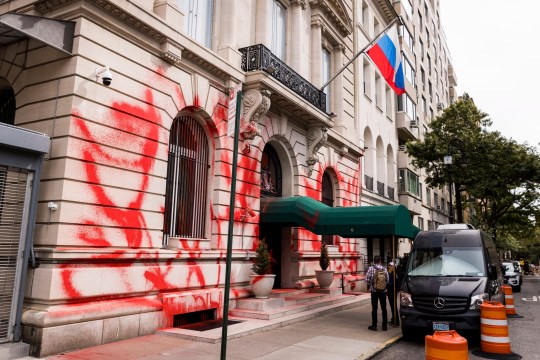 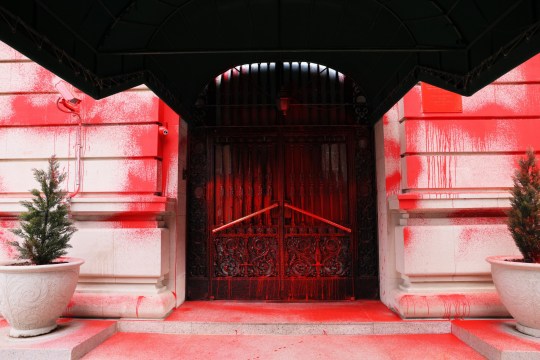 Police responded to the incident in the early hours (Picture: Getty Images) 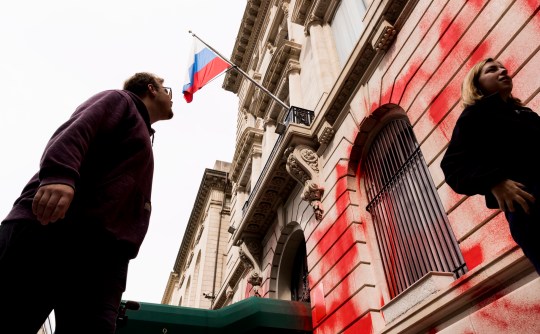 People looked up and gathered outside the consulate this morning (Picture: EPA) 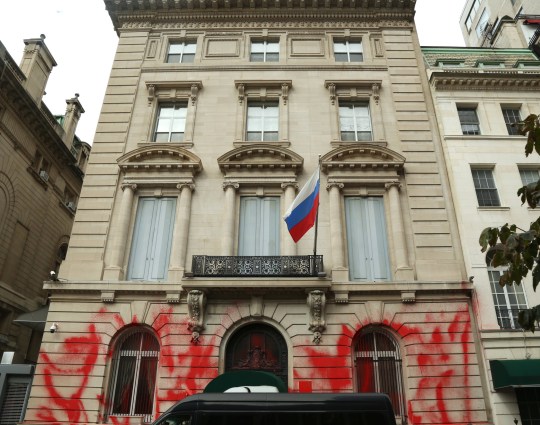 The NYPD is investigating the incident (Picture: Getty Images

But Ukrainian forces appear to be on the verge of retaking the strategically important city of Lyman.

As many as 5,000 Russian soldiers could be encircled in the northern Donetsk city, which has been used as a hub for the occupation forces in the area.

On Friday, rockets hit a convoy in Zaporizhzhia carrying people and supplies into Russian-held territory in the region, killing 25.

According to the New York Times, officers from the New York Police Department responded to the incident at 1.30am New York time on Saturday morning.

A police spokesperson said the investigation is ongoing into the potential ‘bias incident’ and no arrests have been made.