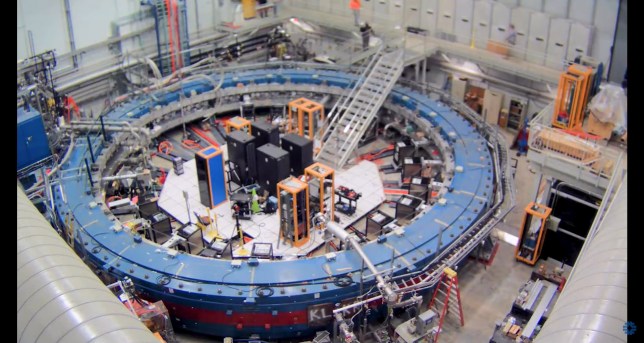 The way we understand the universe could be changed forever after subatomic particles appeared to bend the rules of physics in two breakthrough experiments.

Physicists say the results have been ‘tantalising’ and that they may have found signs of a fifth force of nature.

So far four fundamental forces have been used to explain everything that happens in the universe.

Gravity makes things fall to the ground, electromagnetism deals with the force between two electrically charged particles, strong force binds subatomic particles together and weak force can break them apart.

But physicists were left baffled and thrilled when tiny particles called muons didn’t behave as expected in two different long-running experiments in the United States and Europe.

If proven right, the findings could reveal major problems with the rulebook used by scientists to explain how the universe works at a subatomic level.

At a press conference, Fermilab experiment co-chief scientist Chris Polly said: ‘We think we might be swimming in a sea of background particles all the time that just haven’t been directly discovered. 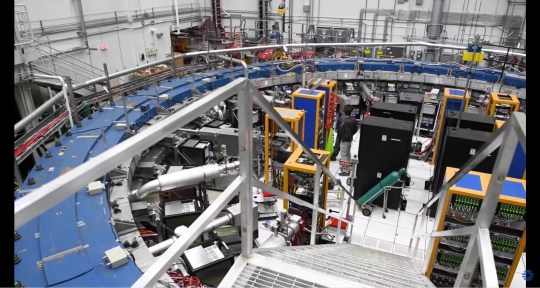 Scientists found the muons were 0.1% off the established rulebook for physics (Picture: FermiLabs)

‘There might be monsters we haven’t yet imagined that are emerging from the vacuum interacting with our muons and this gives us a window into seeing them.’

The current rulebook, called the Standard Model, was developed about 50 years ago and has been backed up by decades of experiments.

But after scientists sent muon particles, which are similar to electrons, through a 15-tonne electromagnet to observe how they ‘wobble’, they were found to be 0.1% off the model.

That may not sound like much, but to particle physicists it is huge – more than enough to upend current understanding.

It suggests they could be interacting with undiscovered particles or forces. As these particles form naturally when cosmic rays hit the Earth’s atmosphere, these findings could completely change how we believe the universe works.

The variation in behaviour may not seem like much, but it’s enough to fundamentally change the way scientists understand the universe (Picture: FermiLabs)

The UK’s Science and Technology Facilities Council (STFC) said the result ‘provides strong evidence for the existence of an undiscovered sub-atomic particle or new force’.

He tweeted: ‘It is getting close to the discovery of new physics beyond the Standard Model –new fundamental particles basically,’ he tweeted.

‘It would be the biggest discovery in Particle Physics for many years – certainly up there with The Higgs Boson.’

The purpose of the track was to keep the particles in existence long enough for researchers to get a closer look at them.

There is still a one in a 40,000 chance that the muons’ mysterious behaviour could be a statistical error.

But if confirmed, the results would be the biggest finding in the world of subatomic particles in nearly 10 years, since the discovery of the Higgs boson, often called the ‘God particle’.

It follows results published last month from the European Centre for Nuclear Research’s Large Hadron Collider that found a surprising proportion of particles in the aftermath of high-speed collisions. 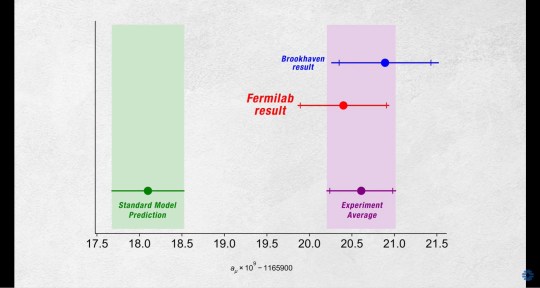 The long-awaited first results from the Muon g-2 experiment at the US Department of Energy’s Fermi National Accelerator Laboratory (Picture: FermiLabs)

The point of the experiments is to pull apart particles and find out if there is ‘something funny going on’ with them and the space they occupy, explains Johns Hopkins University theoretical physicist David Kaplan.

He added: ‘The secrets don’t just live in matter. They live in something that seems to fill in all of space and time. These are quantum fields.

‘We’re putting energy into the vacuum and seeing what comes out.’

Both sets of results involve the strange, fleeting particle called the muon – the heavier cousin to the electron that orbits an atom’s centre.

But the muon is not part of the atom, it is unstable and normally exists for only two microseconds.

After it was discovered in cosmic rays in 1936 it so confounded scientists that a famous physicist asked ‘who ordered that?’

‘Since the very beginning it was making physicists scratch their heads,’ said Graziano Venanzoni, an experimental physicist at an Italian national lab, who is one of the top scientists on the US Fermilab experiment, called Muon g-2.

Researchers need another year or two to finish analysing the results of all of the laps around the 50ft. If the results do not change, it will count as a major discovery, Mr Venanzoni said.