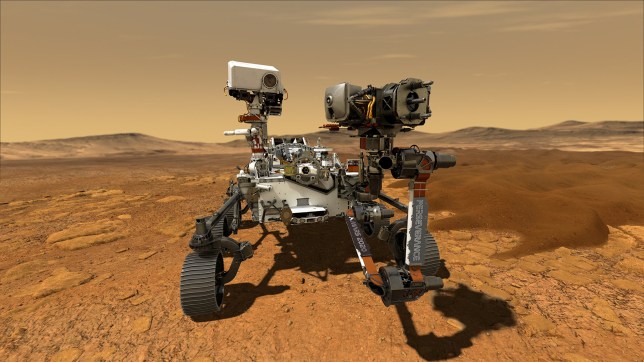 The Perseverance Mars rover is the biggest, heaviest, most advanced vehicle sent to the Red Planet by the National Aeronautics and Space Administration (NASA) (Reuters)

Nasa’s Mars Perseverance rover will land on the red planet on Thursday to begin its search for traces of life.

The mission, backed by the UK Government, is to explore and collect samples for future return to Earth from diverse ancient environments on Mars.

The rover – a scientific laboratory the size of a car – is due to land on the red planet at around 8.43pm this evening, Thursday February 18.

The research destination is Jezero crater, a 28-mile-wide depression containing sediments of an ancient river delta.

Researchers suggest that evidence of past life could be preserved here.

Perseverance will gather rock and soil samples using its drill, and will store the sample cores in tubes on the Martian surface ready for a return mission to bring around 30 samples to Earth in the early 2030s. 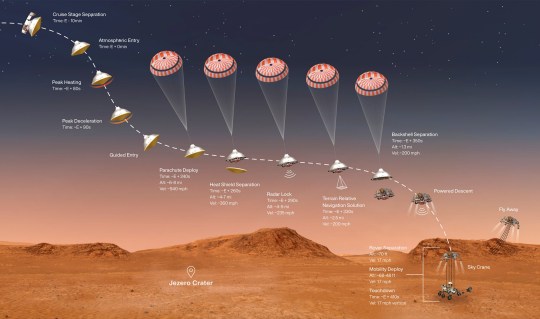 The entry, descent and landing (EDL) sequence of the Perseverance rover on Mars (Reuters)

The prominent British scientists helping to decode the data include:

The researchers are supported by more than £400,000 in funds from the UK Space Agency (UKSA).

Sue Horne, head of space exploration at the UKSA, said: ‘It is great to see a strong representation of UK scientists and engineers involved in the Perseverance mission.

‘Over the next few years, our scientists will play a leading role in this international endeavour, from managing logistical operations to deciding which samples are to be returned to Earth.

‘Perseverance will bring us one step closer to answering the question that’s been on the lips of Bowie fans and scientists for the last 40 years.’

The rover’s instruments will analyse scientifically interesting samples at the Martian surface. 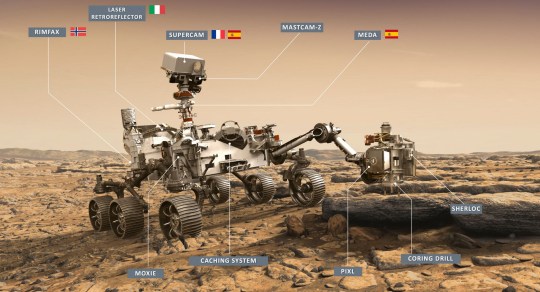 Selected samples will be collected by drilling down to several centimetres and then sealed in sample tubes and stored on the rover.

When the rover reaches a suitable location, a cache of tubes will be dropped on the surface of Mars to be collected by the Sample Fetch Rover, being developed by Airbus in Stevenage, which will take them to the Nasa Mars Ascent vehicle.

Perseverance also carries the Ingenuity Mars Helicopter, which will fly short distances from the rover in the first attempt at powered, controlled flight on another planet.

A successful test of the helicopter could lead to more flying probes to survey the landscape on other planets.

It will also trial technologies to help astronauts make future expeditions to Mars.

These include testing a method for producing oxygen from the Martian atmosphere, identifying other resources such as subsurface water, and improving landing techniques.

They also involve characterising weather and other environmental conditions that could affect future astronauts living and working on Mars. 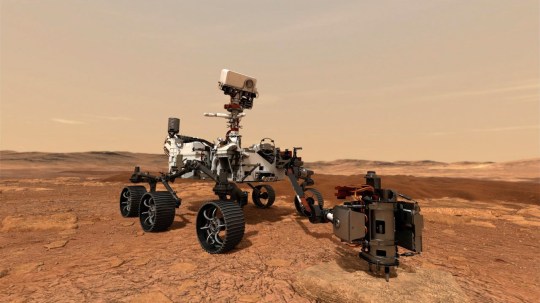 Prof Gupta said: ‘It is crucial to understand what the Martian climate was like early in Mars’s history and whether it was habitable for life.

‘Analysis of data from instruments onboard Perseverance will help us define the best spots to collect rock samples for future return to Earth.

‘Laboratory analyses of such samples on Earth will enable us search for morphological and chemical signatures of ancient life on Mars and also answer key questions about Mars’s geological evolution.’

Prof Sephton said: ‘This could be the mission that answers the question of whether life ever existed on Mars. Evidence of biology on another planet would mean that life on Earth was not alone.

‘We need to choose the best samples… and return around half a kilogramme of material from Mars.

‘The molecular fingerprints of Mars life need not only to have been generated, but also preserved over billions of years.’ 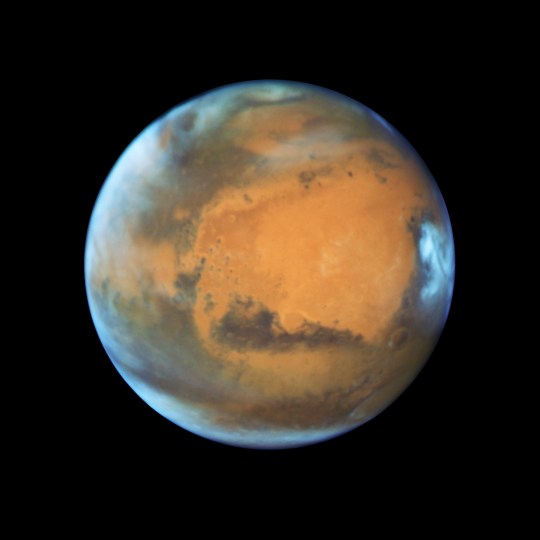 Mars, as seen by the Hubble Space Telescope (Credits: PA)

Perseverance was one of three space missions sent towards Mars during a July 2020 launch window.

This period occurs approximately every two years and two months and is the most economical time in which a rocket can be launched to reach its intended target.

The next window in 2022 will see the UK-built Rosalind Franklin rover, built by Airbus in Stevenage, blast into space.

What CEO’s Need to Know About Capital to Company Fit