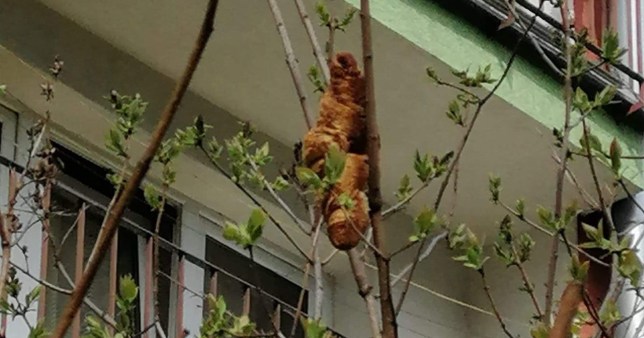 Animal welfare officers in Kraków, Poland, were called to reports of an ‘unusual’ creature hiding in a tree (Picture: KTOZ Krakowskie)

People often make jokes about newspapers reporting on cats stuck up trees if it’s a bit of a slow news day.

But what about if today we wrote a story about a croissant stuck in a tree, instead of a pet?

Animal welfare officers in Kraków, Poland, were called to reports of an ‘unusual’ creature hiding in a tree.

‘People aren’t opening their windows because they’re afraid it will go into their house,’ the caller reportedly said.

It wasn’t clear whether it was a bird, reptile or mammal – but it turned out it was none of those things. It was actually a pastry.

The Krakow Animal Welfare Society confirmed what happened was genuine, though at first they thought it may be an April Fool.

In a Facebook post, the organisation said a woman reported an ‘unidentified animal’ had been in the tree for two days.

When asked if it could be a bird of prey, the caller said it looked more like a ‘lagun’, Polish for lagoon, before remembering the correct word ‘legwan’ – an iguana.

The inspectors said they thought this was unlikely because a reptile would struggle to survive the current temperatures in Poland, but speculated it may have been an unwanted pet released by its owners.

But when they attended the scene, they found the creature was actually a croissant which had become lodged in a lilac tree.

It is believed it was thrown out of a window to feed birds after it became stale.

The society wrote: ‘It is difficult to help something when the sight of it almost knocks us off our feet… an attack of laughter.

‘The iguana turned out to be… a croissant, a croissant made of puff pastry.

‘It probably fell out of one of the windows. He was sitting there and looked quite nice, he liberated his imagination, took on reptilian features.

‘He was almost moving, he was getting ready to invade, he was beginning to resemble a dragon child.’

Although the organisation remained light-hearted about what happened, it added the public should always continue to remain vigilant and report any concerns about animal welfare.