MY son wasn’t a film star, a celebrity or a millionaire.

But Simon Annis has a place in history. 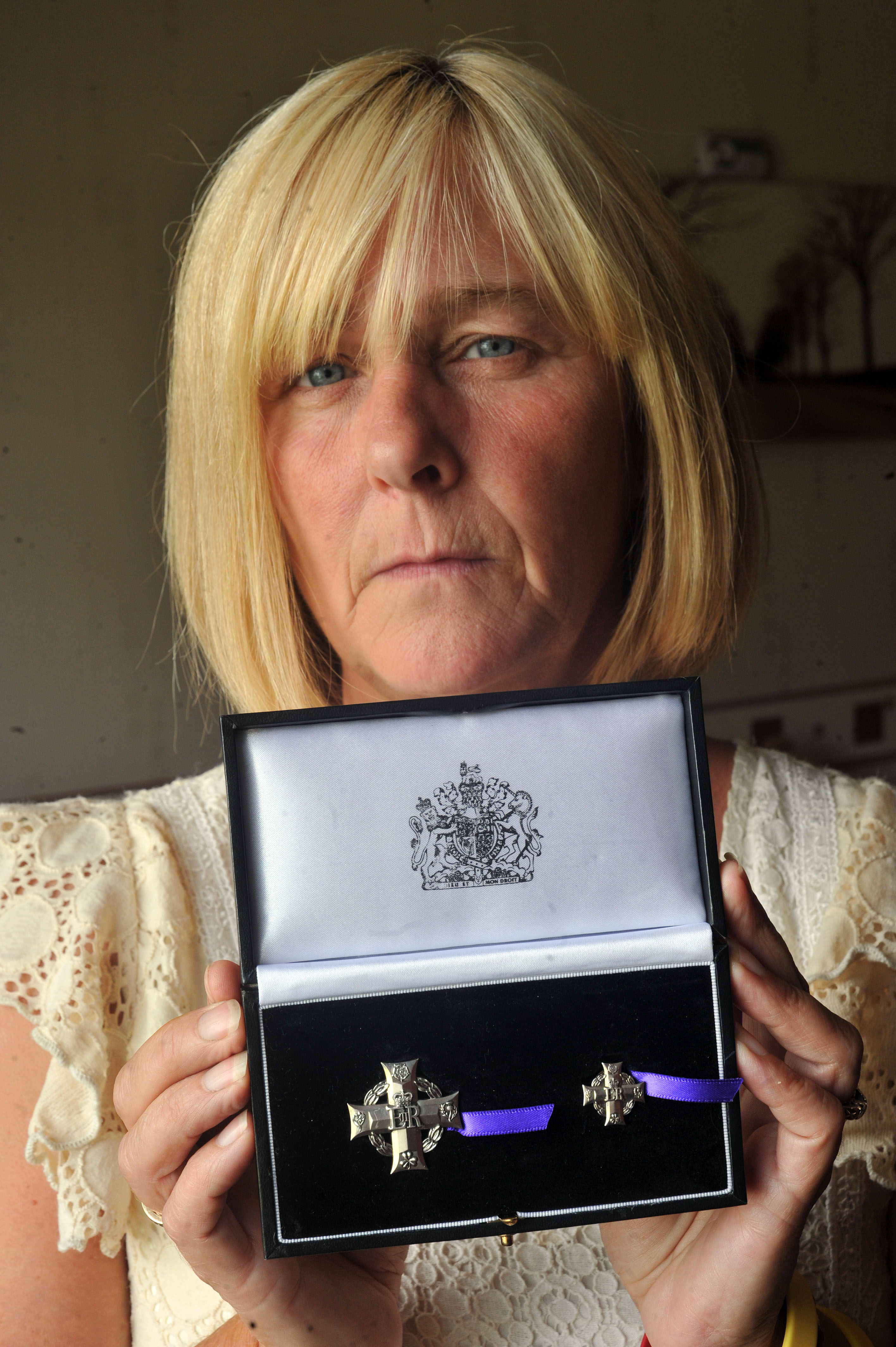 Ann with son Simon’s Elizabeth Cross presented after he was killedCredit: Neil Jones – The Sun

He was one of the 454 British military personnel who lost their lives in Afghanistan.

When he died 12 years ago today going to the rescue of his best friend, my boy became the 201st UK soldier to be killed over there.

Last week, as 600 paratroopers were sent back to Afghanistan to help Britons flee in the face of more atrocities by the Taliban, MP and former soldier Johnny Mercer asked how the mothers of the 454 would feel.

I am one of those mums.

Looking back now, I don’t think the last 20 years were worth it.

Nothing that is happening over there says to me it was worth it.

Within months of us leaving, Afghanistan is back to square one.

As far as I’m concerned, the 454 have been let down and I don’t want other mothers’ sons and daughters going back there.

Next month it will be 20 years since Simon’s fate was set in stone on the day of the murderous attack on the Twin Towers in New York.

I remember clearly how we all sat together watching those horrific events unravel on TV at our home in Cadishead, Salford.

How could we have known that Simon would die because of the consequences of that day when he was just 14?

Within seven years, my cheeky young lad would be a proud man who stood tall in his Army uniform.

When Simon asked me and his dad, Pete, whether he should join up or not, we told him: “Go for it.”

He was in the 2nd Battalion The Royal Regiment of Fusiliers.

I would see the war in Afghanistan on TV but I was oblivious to how bad it was. 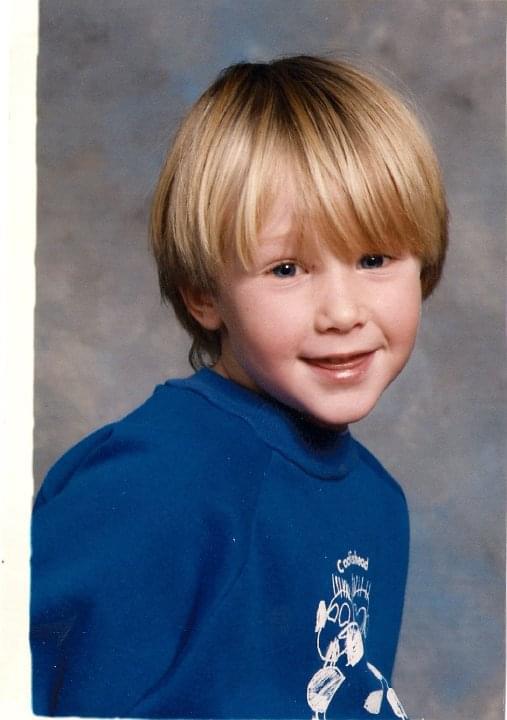 I wasn’t uninterested. I just didn’t feel I had a need to worry, to observe or to help.

Losing my hero changed all this.

I realise now that no matter how much you ignore something, it’s always taking place and one day it may affect your life.

Pete and I were celebrating our silver wedding anniversary on board a cruise ship sailing from Southampton to the Mediterranean.

We’d watched dolphins swim alongside the ship before retiring to our cabin for an afternoon siesta.

It was 4pm when the cabin phone rang.

A lady said: “The captain would like to speak to you and your husband. He’s on his way.”

My stomach started to churn.

I told Pete: “It’s Simon. Why else would the captain feel the need to visit us?”

We both sat perfectly still, staring at the door. Five minutes felt like five hours.

The captain, who was with two strangers, stalled uneasily and then said Simon had been killed. 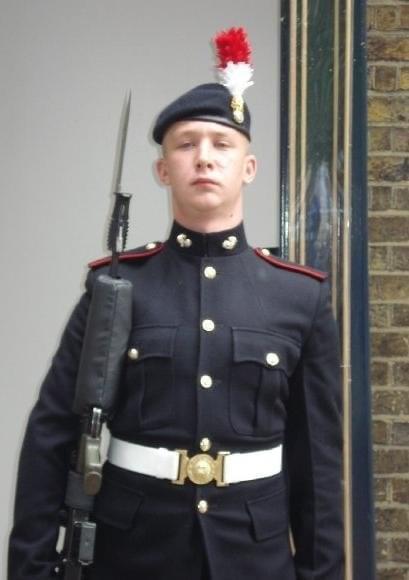 A feeling of utter helplessness swept over us.

We felt small and isolated, alone and frightened.

We’d spoken to Simon on the Thursday and I tried to remember the sound of the voice, and I couldn’t.

The captain gave us the phone number of an officer who confirmed that Simon had been on an early-morning patrol in the town of Sangin when an IED, or improvised explosive device, was detonated.

As the dust cloud settled, they realised there was a casualty — Simon’s true good friend L/Cpl James Fullarton.

All hell had broken loose.

Simon went over to James to administer first aid to his pal.

When James — known to his mates as Fully — was put on a stretcher, Simon and Fusilier Louis Carter lifted it

But they were in the middle of a minefield and Simon tragically stood on another IED.

All three brave heroes lost their lives in the same tragic explosion.

Pete and I had to sit tight on that boat from Sunday to Tuesday.

It was unbearable. They wanted to helicopter us off but it wasn’t possible. 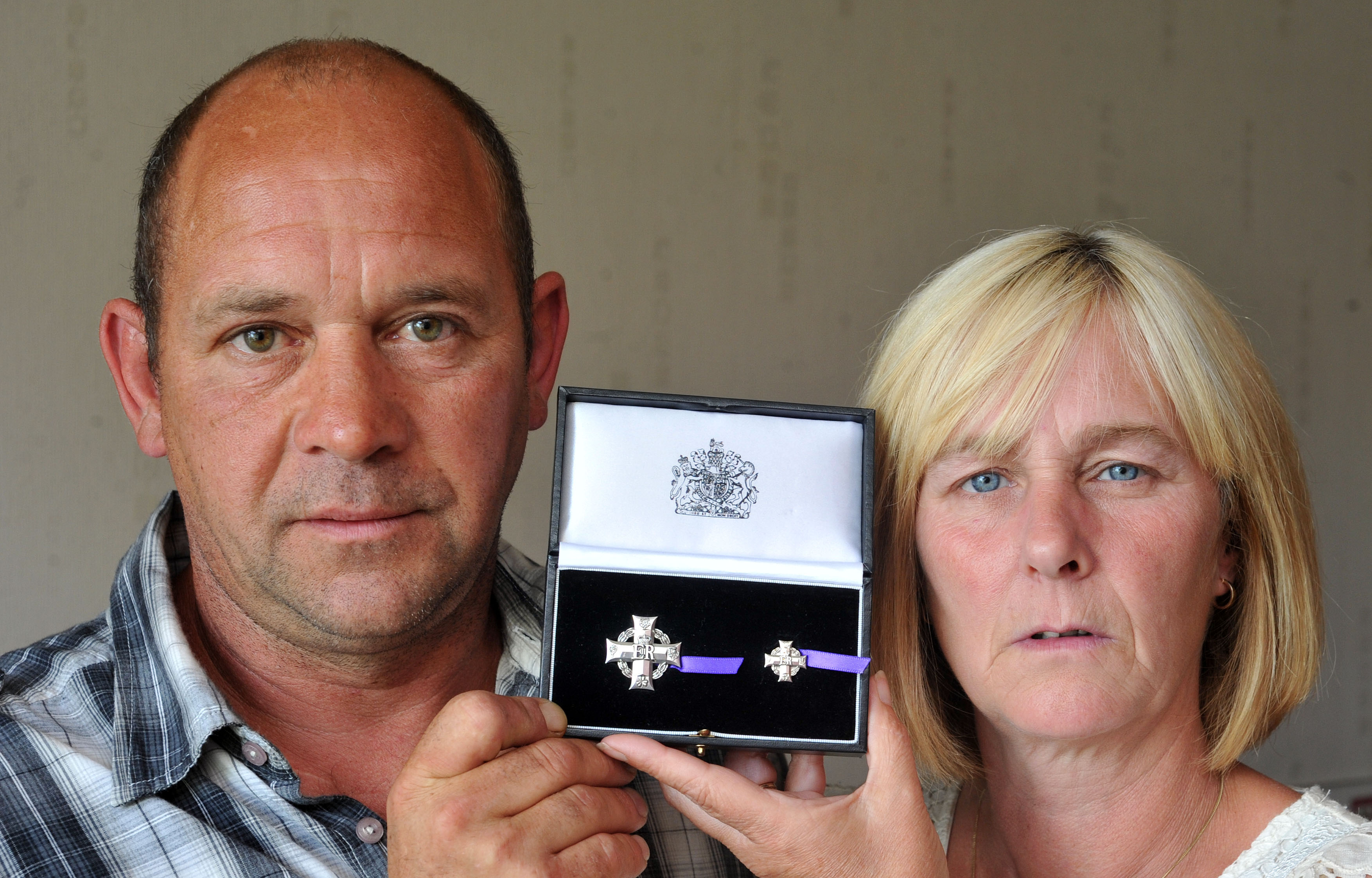 When Simon asked me and his dad, Pete, whether he should join up or not, we told him: ‘Go for it’Credit: Neil Jones – The Sun

We couldn’t stand the confines of the cabin and were going crazy with anger and sadness.

The boat was heaving with partying holidaymakers.

I heard them laughing and joking and hated them all for their happiness.

Tightly holding hands, we made our way to the top deck away from human contact and drank double after double.

It didn’t have any effect and just numbed us.

Finally, we arrived in Gibraltar and flew home from Malaga.

Simon’s picture was in the papers, his face was now national.

On the plane, a man across the aisle was intently reading his paper.

Pete snapped and snatched it from him.

Simon wasn’t on the front page. 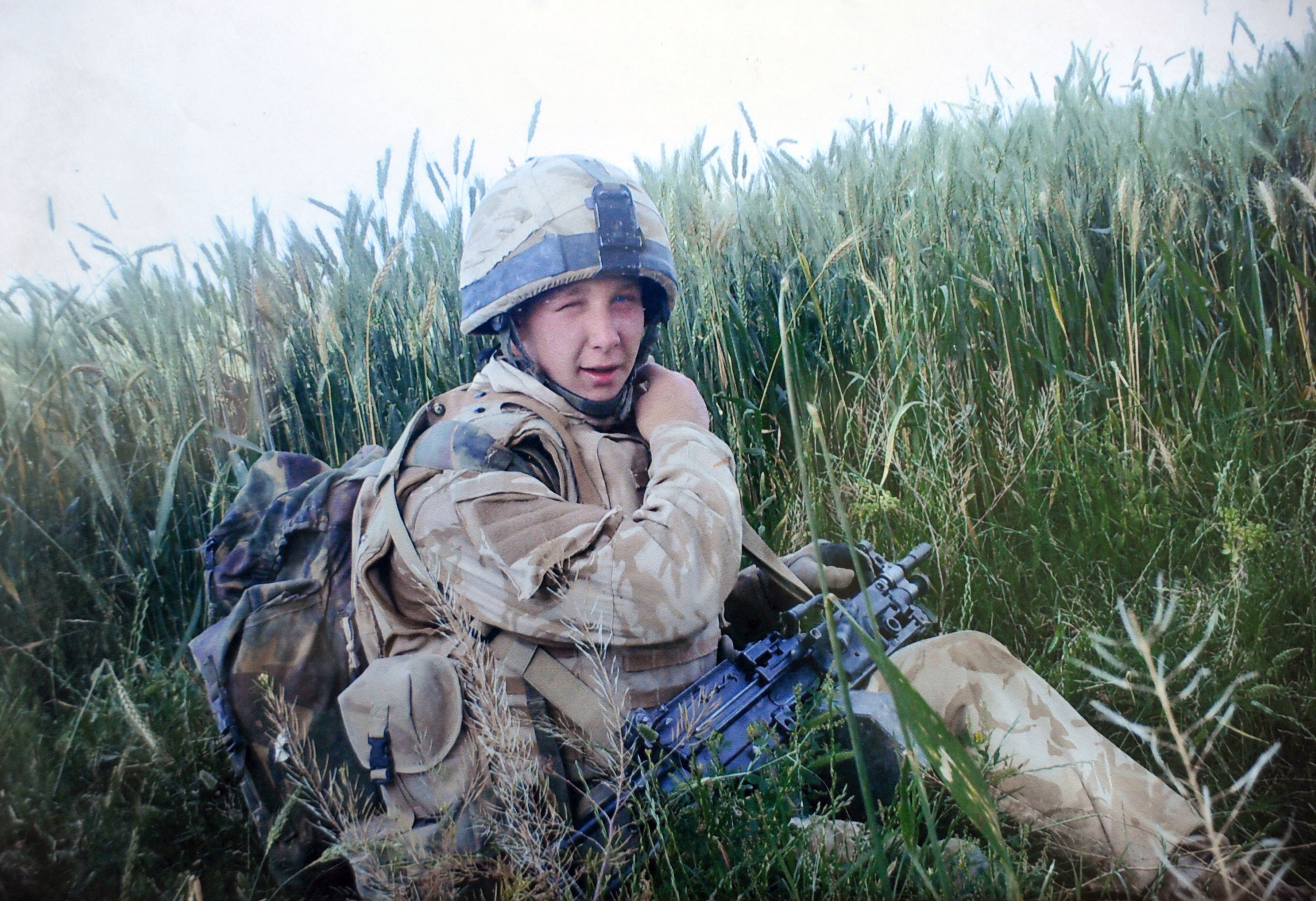 Brave Simon in Afghanistan on the front lineCredit: Neil Jones – The Sun

I apologised to him with no offer of explanation.

After Simon died we didn’t grieve but piled straight into fundraising well over £40,000 for the Fusilier Aid Society.

It gives grants to soldiers from his regiment who bear the physical and mental scars of combat.

We sent parcels over to the lads who were still in Afghanistan.

We included little notes to tell them we’d not forgotten about them.

And it kept us going as well.

Eventually, Pete and I had to move away from Cadishead.

It is a lovely town and everyone supported us and helped us with fundraising.

But constant reminders were there.

Seeing the house Simon was born in and played in, walking down the road, seeing his school with its playground. It all got too much. 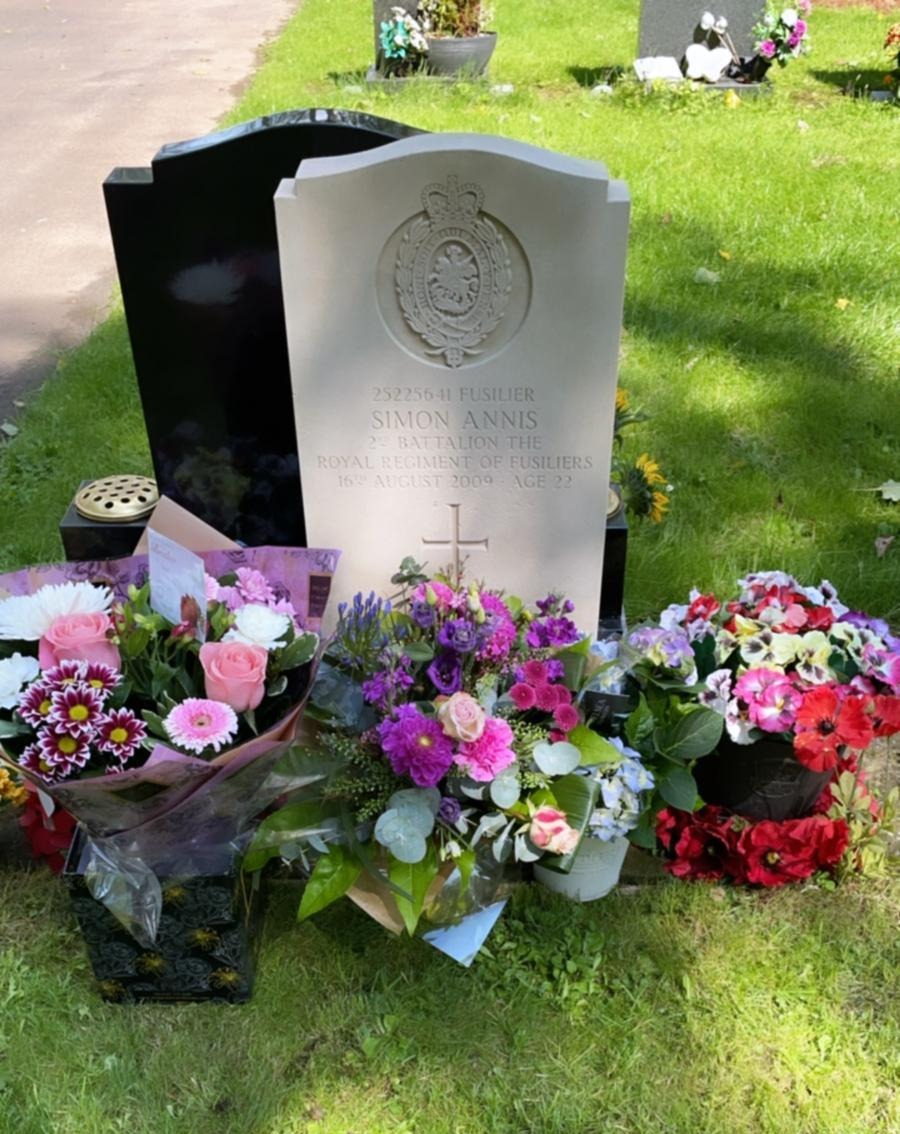 Ann says: ‘We visit Simon each day, we tend his grave, we cut his lawn, we wash his hero’s headstone and make sure he has fresh flowers’

Simon’s precious items have pride of place at our new home in Mobberley, Cheshire.

There’s a photograph of him taken just before he went to Afghanistan.

It is set in a crude hand-made wooden frame.

It was the picture that stood on a table in Afghanistan during his memorial service, so I will never replace that frame.

Along with his hackle, belts, medals, flags and Bible is Pete’s most treasured item, a brass Zippo lighter Simon bought him one Christmas.

It was engraved on the side with the words “Thanks for everything dad”.

The words are worn down now and Pete is too scared to use it in case it gets lost.

There’s also his beret, one he had worn, and I can smell Simon on this.

I hold it to my heart sometimes and sniff into it deeply.

I look at his things each day and wonder, will it get easier?

Will I look at his things one day without the hurt it gives me?

I don’t want it to get easier because when it does, it will mean we are finally getting on with our lives. 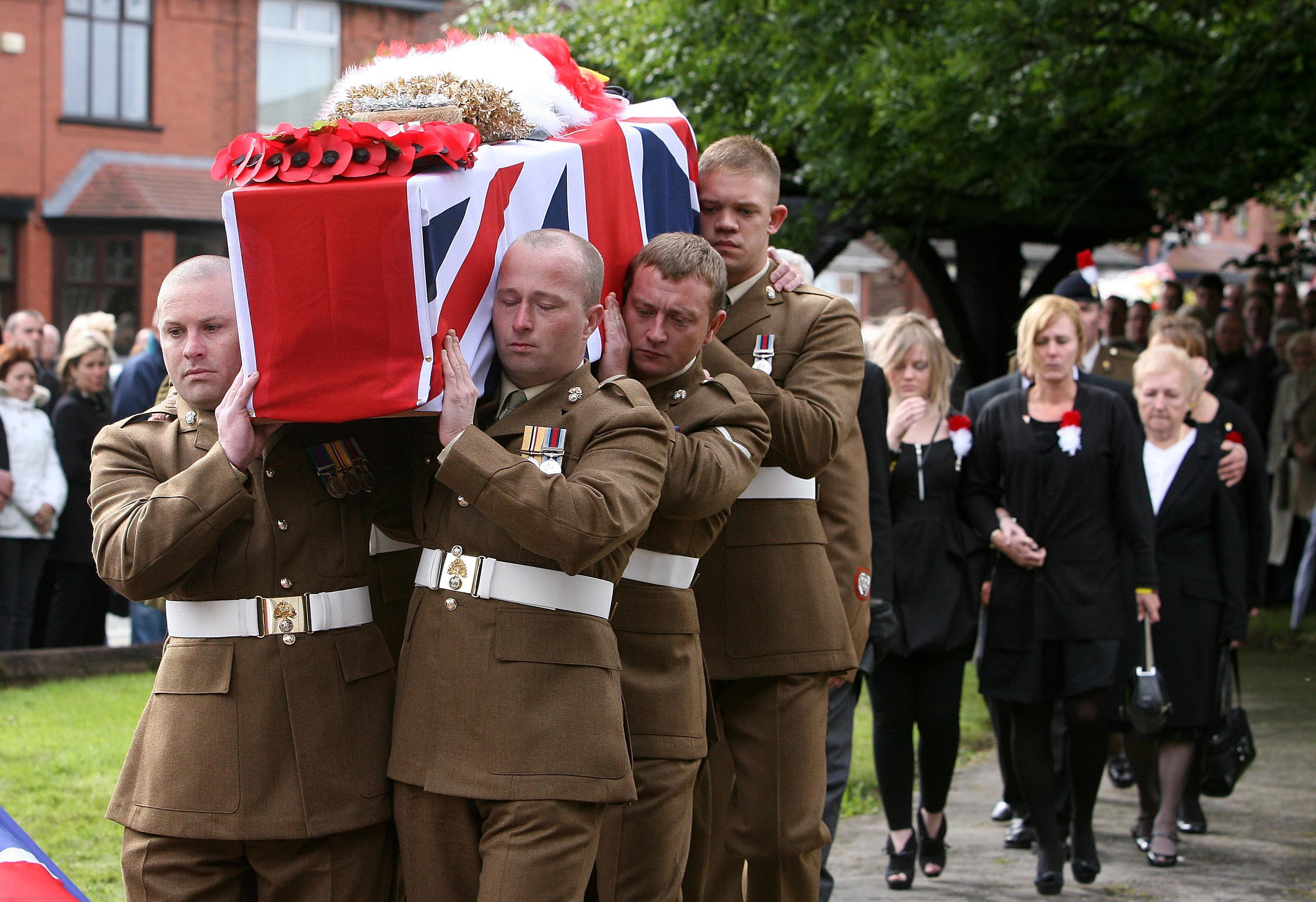 The coffin of Fusilier Simon Annis is carried into the church of St John the Baptist, Irlam, ManchesterCredit: PA

The letters Simon told me he was going to write — the letters that were to remain unopened unless anything happened to him — never came.

Maybe he had no time, maybe he couldn’t find the words, maybe he didn’t want to tempt fate

I still wait for these and I tell myself that one day they will come through my letter box, having been lost in admin files.

We visit Simon each day, we tend his grave, we cut his lawn, we wash his hero’s headstone and make sure he has fresh flowers.

We keep his plot fit for a king.

We nurtured our son for 22 years and it makes no difference that he’s no longer with us in life.

He’s with us here in our hearts and our memories.

The verdict from the coroner at his inquest was “unlawful killing”.

We have no closure.

If Simon had been murdered in this country and the offender was brought to justice we could have faced him and looked into his eyes.

But not in this case, and that’s what makes it so hard to accept.

The cost of war

I was frightened Simon’s name would be forgotten but we have no fear of that happening now.

His name is there with all the other Afghanistan war heroes at the National Memorial Arboretum in Staffordshire.

He also has a memorial brick in the new extension of his high school along with two more in walls of the Fusilier Museum in Bury.

Two trees of life planted in his name are growing tall and strong now.

My dream is to see a bronze statue of Simon in his home town, a true fitting monument in honour of all the fine young soldiers who gave their lives in Afghanistan.