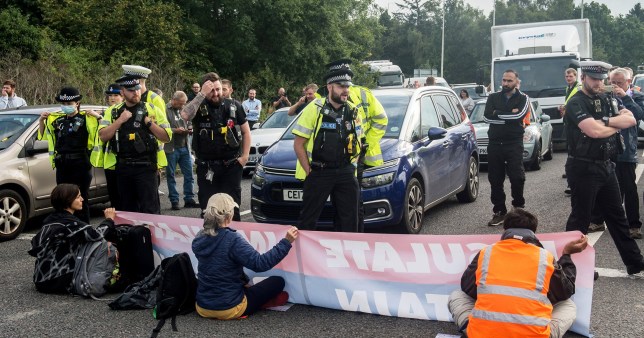 Woman who suffered stroke could not get to hospital due to M25 climate protesters (Picture: Getty Images)

Commuter chaos on the M25 sparked by climate campaigners left a woman partially paralysed from a stroke.

Her son Chris told LBC’s Andrew Pierce that he took it upon himself to drive his mother to hospital after she suffered what paramedics suspected was a stroke.

The caller said he decided to drive her himself because of ambulance delays and was forced to watch her ‘slip away’.

But instead of getting her to a hospital, he ended up stuck on the motorway for six hours as Insulate Britain protesters had blocked the road.

The mother and son were stuck in the car waiting for police to clear the protestors, who had glued themselves to the M25.

As he teared up during the call, Chris said: ‘At one point, she put her hand on my leg and said ‘Oh, Chris, I do not feel very well’.

‘That was the last word she has been able to speak to me.’

It is unclear where the man had called an ambulance from, however, London Service NHS Trust did not report any impact on the service.

Detailing his shocking experience, Chris said: ‘I was there with my mother for six hours watching her slip away in front of my eyes, and I could do nothing.

‘When we got her to the hospital, the doctors said if we were to have gotten to them within 90 minutes, her symptoms, her recovery would have been minimal.

‘Because she had been left to endure a stroke for six hours she has got complete paralysis now down her left side. 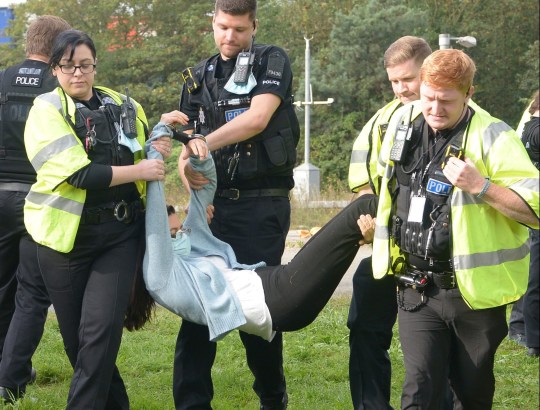 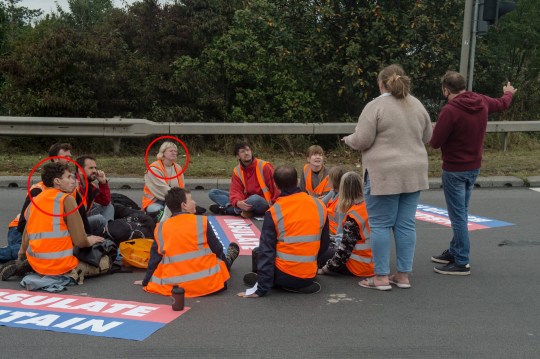 Local people argue with activists as protesters from the Insulate Britain block a major roundabout near the Dartford crossing and M25 on September 15 (Picture: Getty Images Europe) 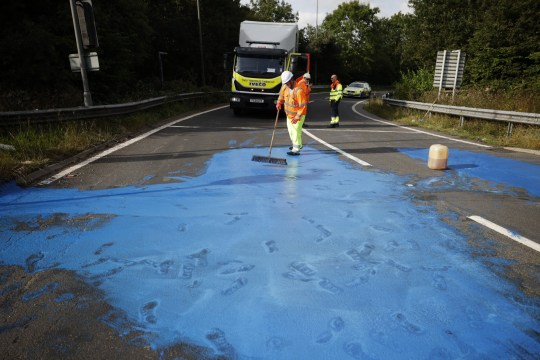 Police clear up after blue paint was spilt on the motorway at junction 9 of the M25 in Leatherhead after climate change protesters strike again (Picture: LNP)

‘I am so angry and so upset – this did not need to happen.’

Dozens of climate change protesters were arrested after blocking the M25 yesterday, which was the third time this week.

The group, which is demanding urgent Government action on home insulation, stopped traffic at a section of Britain’s busiest motorway, Metro.co.uk reported.

Just before 9am, 14 activists walked out into the road carrying banners and blocked cars from moving. Frustrated motorists got out of their cars to argue with the group.

One man even clashed with protestors as he attempted to drag one of them off the road by pulling their hair.

Yesterday’s stunt stunt comes after 89 people were arrested for causing disruption to the motorway on Wednesday, while dozens were arrested on Monday.

Vowing to plough forward with disruptions, the group said that insulation is, ‘pound for pound, the most cost effective way to reduce the devastating impacts of fuel poverty and reduce CO2 emissions’.

One campaigner called Mags, a social worked based in London explained why they are urging the Government to insulate homes.

She said: ‘It will lift so many families out of fuel poverty, as a social worker I have seen how poverty makes things so difficult for people.’

Odegaard proved he can mix up technical class with grit and determination, he’s more than up for battle