A MUM was left with permanent nerve damage and a third degree burn after a single drop of oven cleaner fell into her trainers.

Vicky Buck was wearing full protective gear while scrubbing the inside of a mucky oven with Vanquish Heavy Duty Oven Cleaner. 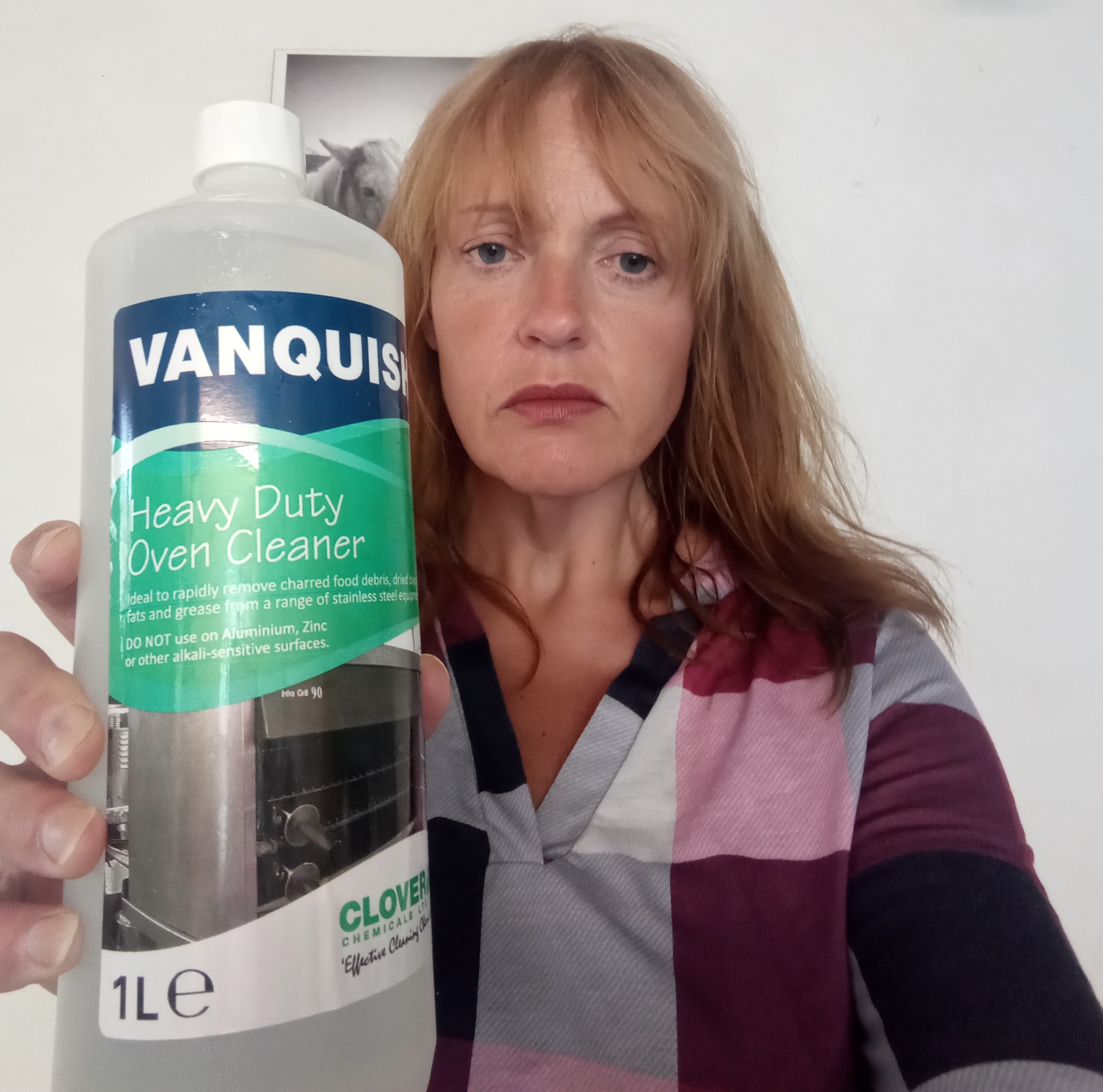 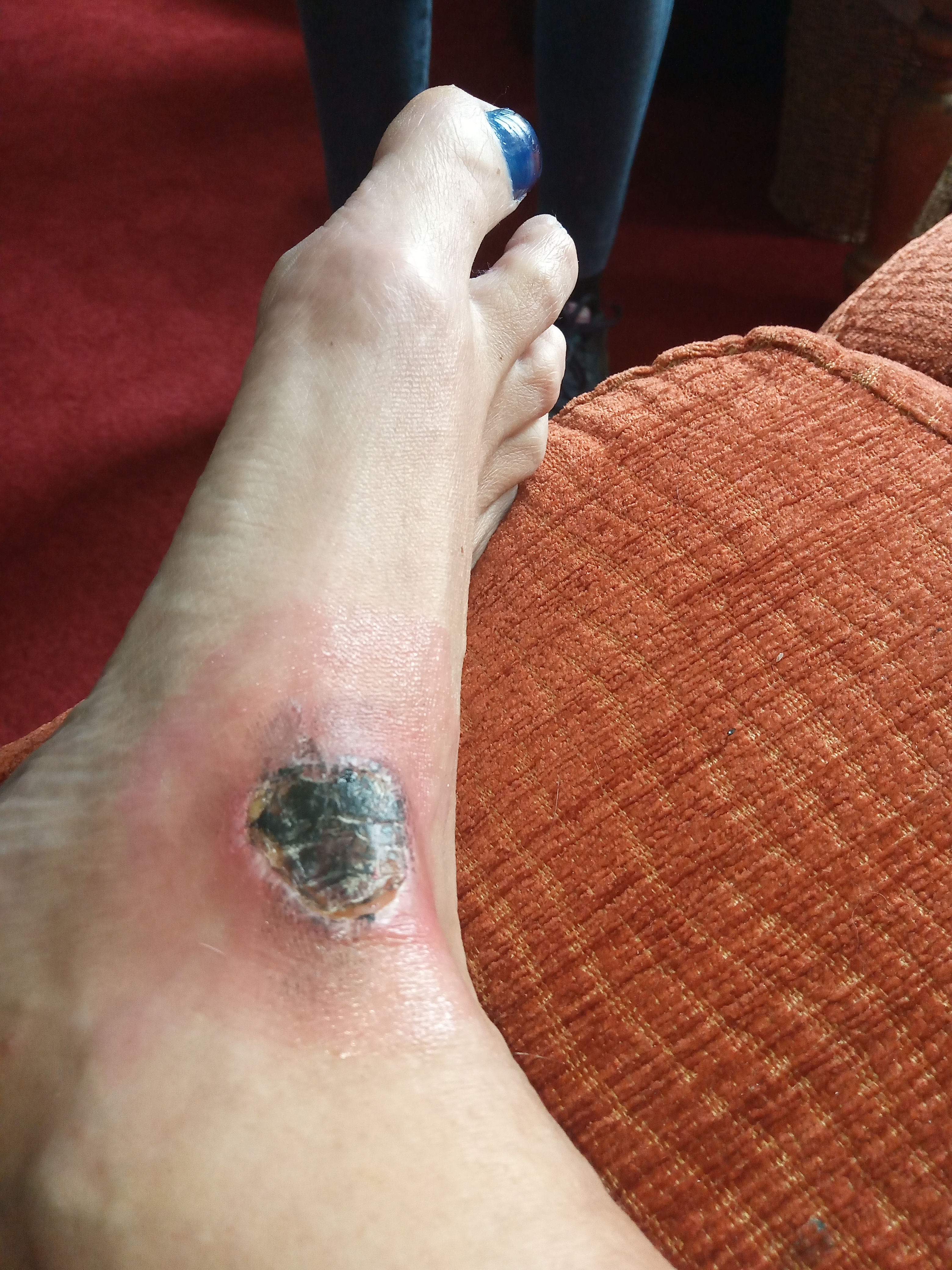 But a tiny drop dripped off her cleaning brush and inside the tongue of her shoes, leaving her with a 50p sized burn. The alkali instantly burned deep enough to cut the nerves.

By the time Vicky peeled off her protective clothing and took a look her sock was fused to her foot – and the cleaner had burned through her gloves.

Professional cleaner Vicky will be permanently scarred and faces surgery to “dig out all the dead flesh” and might need a skin graft.

“On the bottle it just says to protect yourself, which is leaving too much to interpretation.

This stuff is available in supermarkets, and it’s really really nasty.

“I had all the protective kit on, and a tiny blob just went inside the tongue of my trainer.

“There really can’t have been much of it. My foot started stinging, and I thought ‘I will just finish what I am doing’.

“Then it stopped burning so I thought it was okay. But it had stopped because it was so bad it had burned four layers of skin and damaged the nerves.

Vicky, a former tree surgeon, has been a professional domestic cleaner for two years. 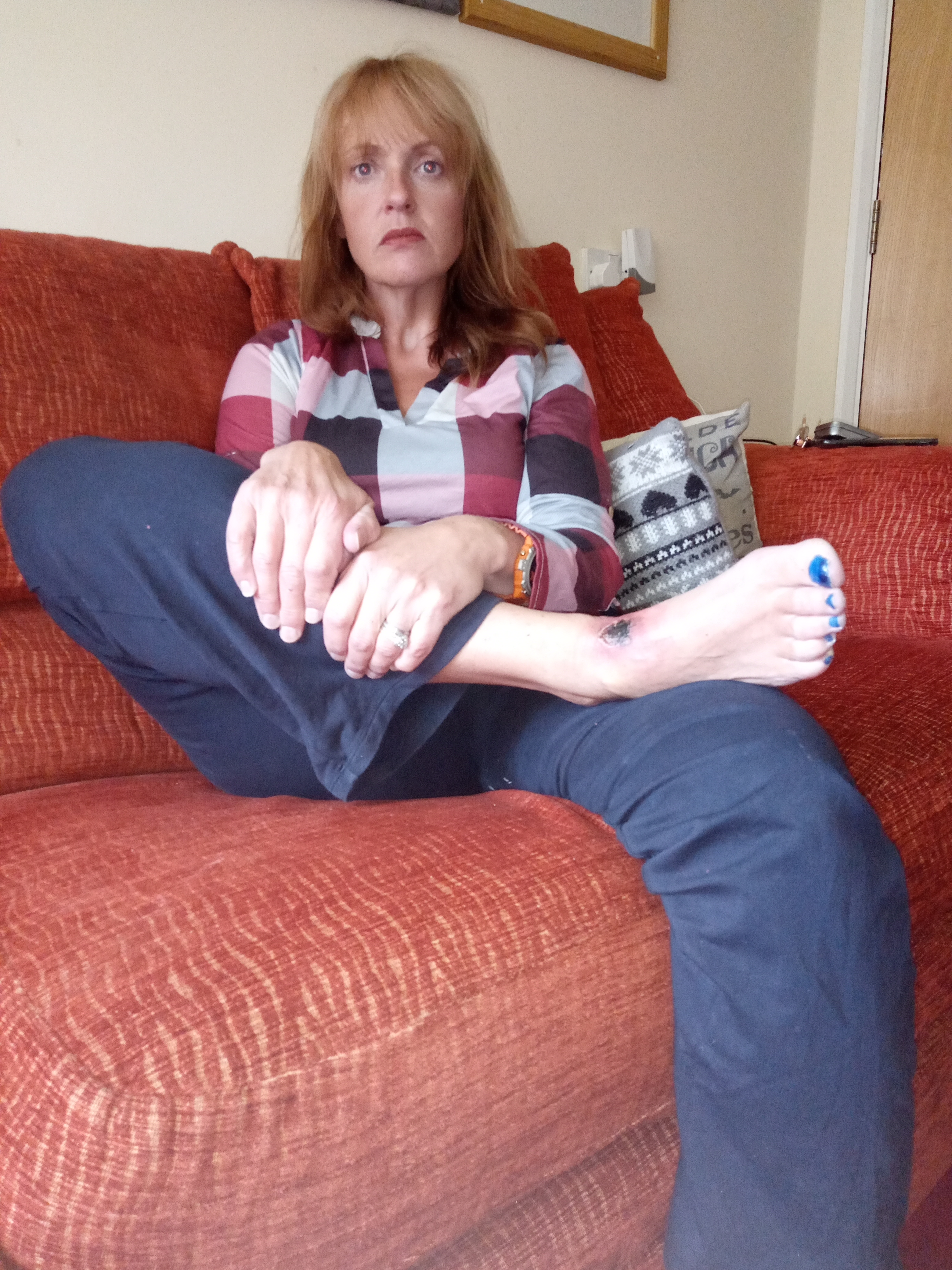 She adds: “My waterproof suit has reinforced knees and still my knees got burned, but fortunately they will recover.

“My trainers are specifically made for work, and are very sturdy with steel toe caps and heels.

She went to her GP, and was referred to Harrogate Hospital, where she says she was told she would need surgery and would definitely have a scar. They referred her to a burns and plastic surgery unit.

She said: “When I took the gloves off I had to kind of peel them off and my hands were covered with blood, but fortunately they recovered fine. It melted my sock and my skin and fused them together.

“The hospital said they will dig out all of the dead flesh which will leave a hole the size of a fifty pence piece and half an inch deep. They will try to pack the hole with gauss and iodine but if it doesn’t heal they said they will have to graft it.

“I am not a vain person, and I do have a lot of scars already but I really don’t want another.

I have put a lot of effort in and done a lot of courses to learn how to work safely with chemicals.

“On the advertisements for this stuff they have no protective gear on and there is no suggestion that it can do this to you.

“There should at least be a massive warning to say it is extremely dangerous. 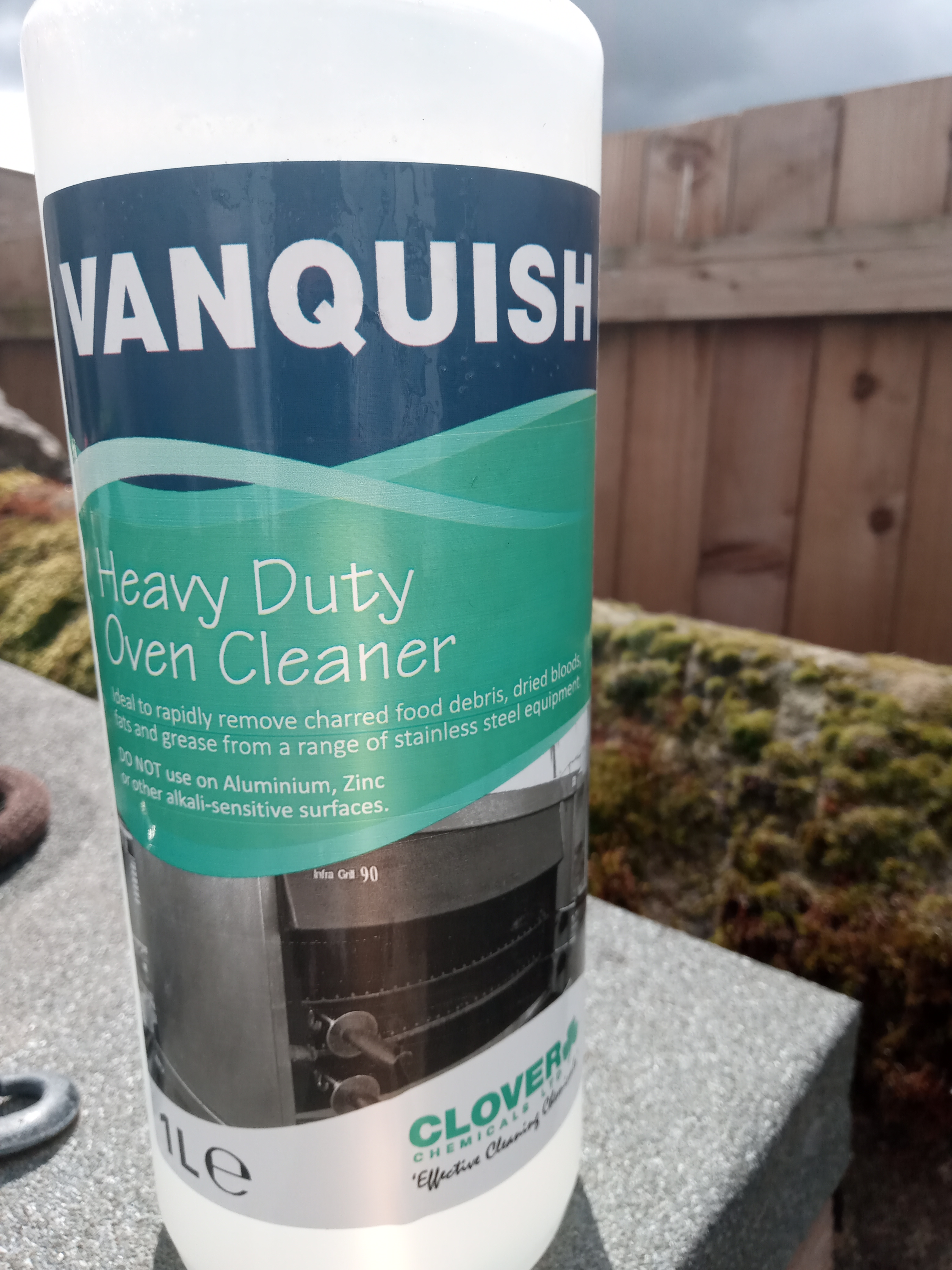 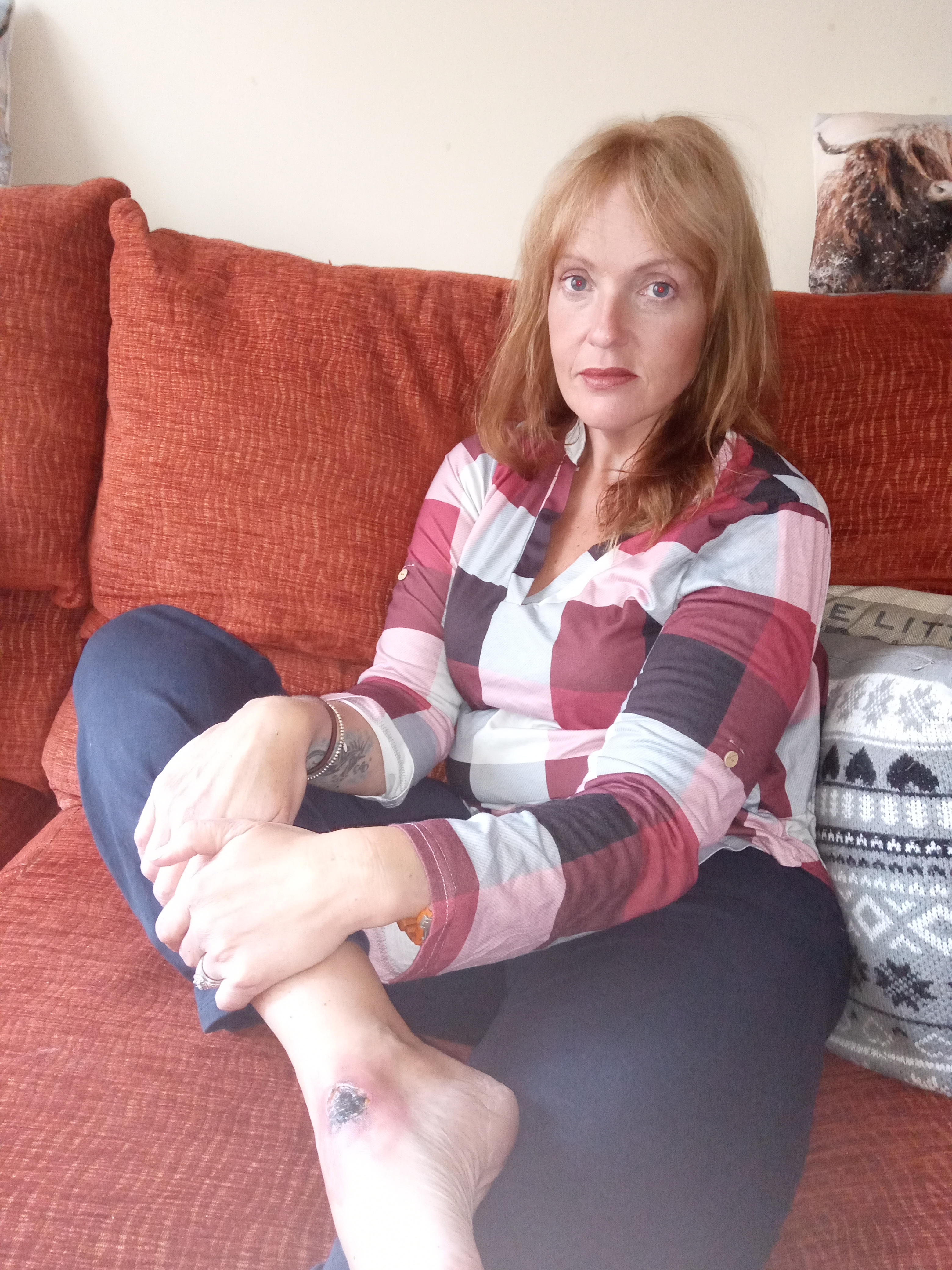 She now faces surgery that will leave a half-inch deep, 50p size hole

“Professionals in oven cleaning take the oven to bits because they know how and they have dunk tanks of chemicals in their vans that they put all the parts in to clean them.”

She is sharing her story to raise awareness about the safety of off-the-shelf cleaning products. She advised people to pay for professional oven-cleaning services rather than risk injury to themselves. 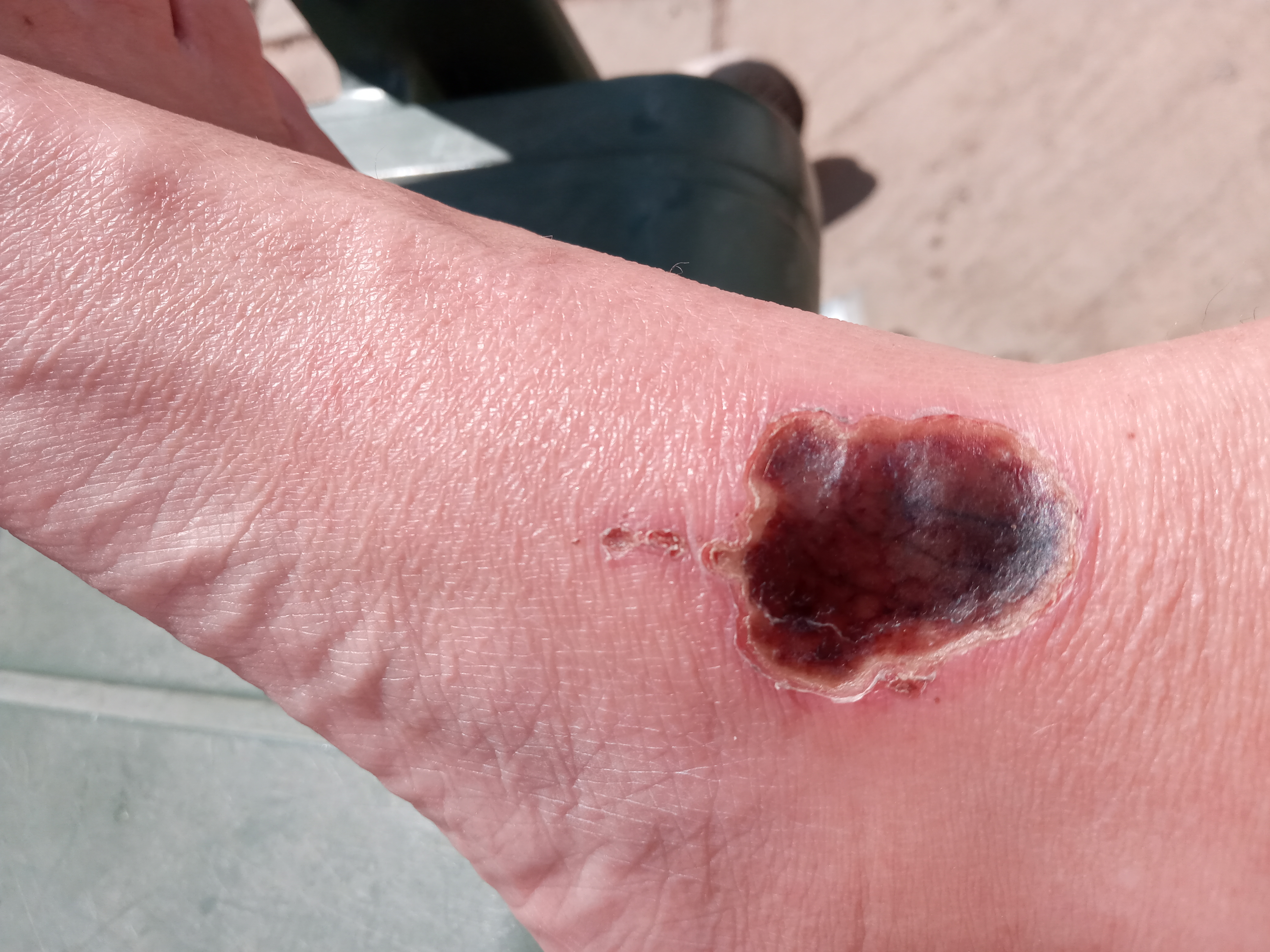