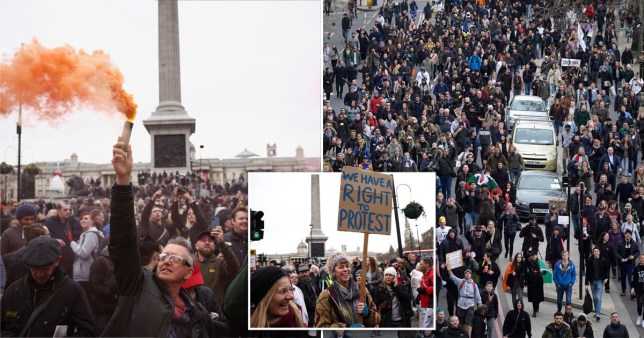 MPs wrote that criminalising protesters is ‘not acceptable and is arguably not lawful (Pictures: Reuters/Getty Images)

Dozens of MPs and peers have urged the Government to allow socially distanced protests to go ahead while coronavirus restrictions are still in place.

More than 60 have signed a letter arguing that criminalising people for demonstrating is ‘not acceptable and is arguably not lawful’. The document was sent to Home Secretary Priti Patel and Health Secretary Matt Hancock.

Civil rights groups Liberty and Big Brother Watch co-ordinated the message after speaking out several times against ‘the greatest loss of liberty in our country’s history’ that is turning the UK into ‘an authoritarian surveillance state’.

They slammed the Government for the ‘entirely avoidable’ scenes in Clapham, London, at the recent Sarah Everard vigil.

Footage showed Met officers arresting and pinning down females as they spoke out against male violence against women.

The letter was released just before things turned ugly at an anti-lockdown protest in Hyde Park today. 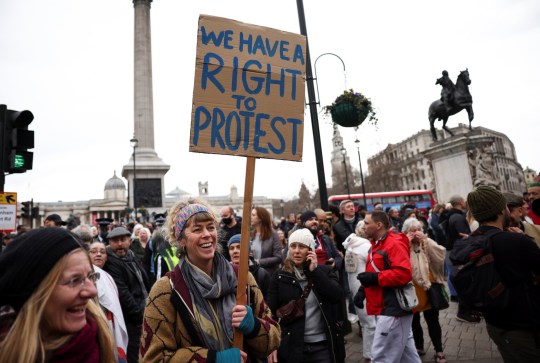 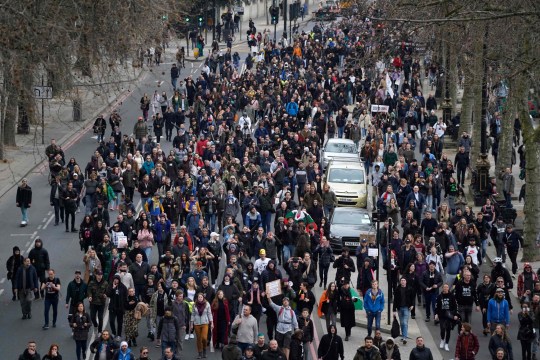 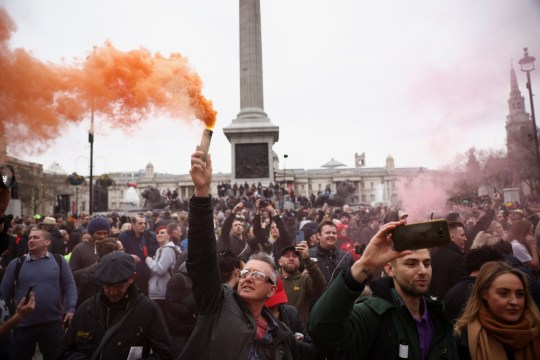 Met Police said 33 people were arrested this afternoon as thousands of mostly maskless anti-lockdown demonstrators marched through the capital.

It comes after a controversial bill that would give police more powers to crack down on protests cleared its first hurdle in the Commons, paving the way for it to become law.

The Bill makes it a crime to ‘intentionally or recklessly cause public nuisance’ that cause ‘intimidation or serious unease’ and ‘impact’ the community without a ‘reasonable excuse’.

Sam Grant, head of policy and campaigns at Liberty, said: ‘In a healthy democracy, protest is a critical way we can fight for what we believe in.

‘The Government’s current quasi-ban on protest is completely unacceptable.

‘Last week, the police conceded protest is not banned under the lockdown regulations, but used them to threaten then arrest demonstrators anyway.

‘The Home Secretary must immediately issue guidance to all police forces to ensure socially distanced protests can go ahead and create an explicit exemption for protest in the current regulations.’