Boris Johnson’s plan to revive imperial measurements — timed to mark the Queen’s Platinum jubilee — has been dismissed as ‘nonsense’ by one of his own MPs.

The Government is expected to announce that British shops will once again be able to sell products in pounds and ounces — a change that may help to shore up support from Brexiteer voters.

But Alicia Kearns, one of at least 20 Tory MPs to declare they have lost confidence in the PM over partygate, tweeted ‘not one constituent, ever, has asked for this’.

She added: ‘This isn’t a Brexit freedom. It’s a nonsense.’

Yet he went on to insist there were people who ‘want to go back’ to using imperial weights such as pounds and ounces, and measures such as yards and miles.

‘This gives people and businesses the freedom’, he told Sky News’s Sophy Ridge On Sunday programme.

‘There are sectors out there – I know people out there in my constituency, the market traders and vegetable traders as well as some of the pubs – which will be pleased to be able to go back to those imperial measurements. 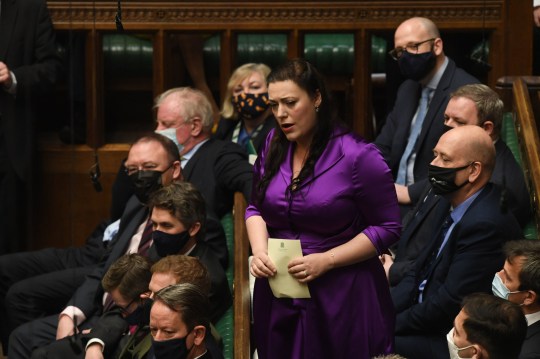 ‘Not one constituent, ever, has asked for this’, Tory MP Alicia Kearns said (Picture: PA)

‘We’re just saying you now have a choice, and now we’ve left the EU we can do that.

The EU weights and measures directive came into force in 2000, with traders required to use metric units for sale-by-weight or measure of fresh produce.

It remains legal to price goods in pounds and ounces but they have to be displayed alongside the price in grams and kilograms.

A consultation, co-ordinated by the Department for Business, Energy and Industrial Strategy, could change those stipulations, allowing traders to choose how they price fresh items.

The second part of the PM’s plan is to bring back the crown stamp on pint glasses – but many insist the stamp was never banned by the EU.