A WOMAN has been slammed as “unthinkably stupid” by police after she LAID DOWN on a railway track for photographs.

Shocking CCTV footage shows the woman posing for snaps on the level crossing while out on a lockdown walk in East Sussex. 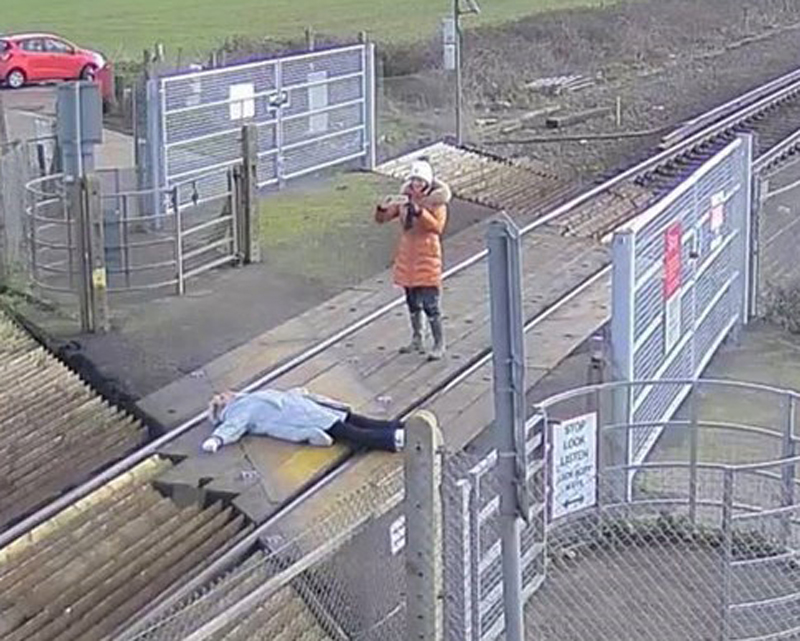 The incident happened on a single track where trains reach speeds of 70mph and police say the two women could have been just “moments from catastrophe”.

Now police and rail chiefs are warning of the dangers of level crossings.

It is the latest in a series of dangerous incidents at the same crossing which Network Rail says could have ended with fatal or life-changing consequences.

The incident happened at Tidemills level crossing at Seaford on Monday.

Two women wearing masks are seen walking through the metal gate before walking onto the crossing across the single track.

After a quick conversation one of the women is seen laying down on the track while the other takes pictures of her before the4y move on.

The women have been slammed as ‘unthinkably stupid’ by police

Inspector Jonathan Pine of the British Transport Police, said: “This is unthinkably stupid behaviour by two women clearly oblivious to the dangers of level crossings.

“Trains pass through this line at speeds of up to 70mph, so they could quite easily have been moments away from a catastrophic incident.

“We’ve seen first-hand the consequences of this sort of recklessness and no photo opportunity is worth risking your life for.”

Network Rail say it is the 17th incident at this crossing in the last nine months with 15 recorded near misses.

During the whole of 2019 there were only four recorded incidents with three recorded near misses.

The dangerous behaviour at Tidemills include level crossing users filming the emergency stop of an oncoming train.

In another incident, bike users narrowly missed a train while large groups of pedestrians have also experienced close calls by trying to beat approaching trains. Cameras have also captured a funeral procession using the crossing.

“We cannot stress enough the danger that people are placing themselves in when they don’t use a crossing safely. A split-second decision can have life-changing consequences, not only for those involved, but also for their family and friends, train drivers and railway workers.

“Please, never take chances when using level crossings and if you have any concerns, always contact Network Rail or British Transport Police.”

The level crossing at Tidemills is a Stop, Look and Listen footpath crossing but plans have now been put in place to build a footbridge over the track.