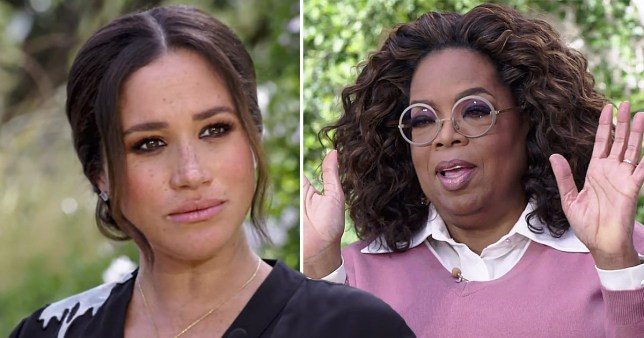 Meghan and Harry have faced pressure to push back the interview (Picture: CBS)

Meghan Markle ‘would never’ postpone the Oprah interview and believes Buckingham Palace is using Prince Philip’s health as an excuse to ‘keep her muzzled’, a friend has claimed.

Meghan and Harry have faced pressure to push back the hotly anticipated interview out of respect for the Duke of Edinburgh, who is recovering from heart surgery.

But a Hollywood insider with ties to the Sussexes told DailyMail.com: ‘Even if Meghan had the choice to postpone the Oprah special she said she wouldn’t because it has absolutely nothing to do with Prince Philip and that this is just an excuse by the palace to keep her muzzled.

‘Prince Harry has no say on the matter. What’s done is done. Meghan said now the whole world can see what she had to endure for months on end. No support whatsoever and now even across the pond, still no loyalty or support. ‘

The Sussexes are expected to make ‘shocking’ revelations about their time as senior royals during the two hour CBS special, which airs in the US on Sunday and then on ITV in the UK on Monday.

In a new trailer released on Friday, Meghan declares she is ‘ready to talk’ and claims Buckingham Palace previously banned her from doing an interview with Oprah before her wedding to Prince Harry.

In a previous teaser, Prince Harry said his biggest concern was ‘history repeating itself’, fearing his wife would suffer the same fate as his late mother Diana amid a war with the British press.

And another trailer showed Meghan explaining how she ‘couldn’t stay silent’ while the Royal Family ‘plays an active role in perpetuated falsehoods’ about her’.

The bombshell clips have been released amid rising tensions over allegations Meghan bullied staff during her time as a working royal, which the duchess has strongly denied.

Buckingham Palace confirmed on Wednesday it would launch a probe into the claims, which emerged in a 2018 email sent by Harry and Meghan’s then press secretary Jason Knauf.

The couple’s team branded leaks of the allegations a ‘calculated smear campaign’ to discredit the duchess right before the Oprah interview. 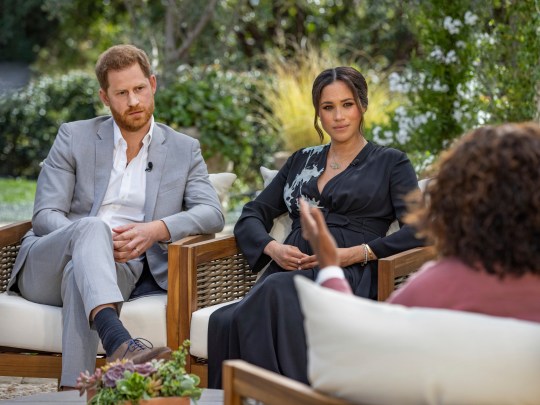 Meghan and Harry’s tell-all interview will air on CBS in the US on Sunday (Picture: AP)

Friends and former co-workers have also leaped to Meghan’s defence, with one claiming she is being painted as an ‘angry woman of colour’ in an ‘ugly’ bid to destroy her.

The source who spoke to the Mail said the ‘outrageous’ bullying allegations prove why Meghan and Harry had to part ways from the royal fold.

They said: ‘Meghan said not once did anyone from the Palace come to her defence when she was being shredded by the tabloids, but now all of a sudden it’s okay for those same people to talk to the media.

‘She said it’s a double standard and not in a million years would Kate ever be treated this way. Meghan said she was singled out from day one.

‘Meghan said she is beyond relieved and grateful that she can enjoy her pregnancy surrounded by love and support, unlike what she experienced behind the walls of the Palace.’

It is alleged during her time as a working royal, Meghan drove out two personal assistants and staff were ‘humiliated’ on several occasions.

In response Meghan’s lawyers said: ‘It’s no coincidence that distorted several-year-old accusations aimed at undermining the duchess are being briefed to the British media shortly before she and the duke are due to speak openly and honestly about their experience of recent years.’

The former actress allegedly thought the households of the Duchess of Cambridge, the Duchess of Cornwall and Prince Charles were responsible for leaking negative stories to the press about her during her time as a senior royal.

But Buckingham Palace have denied accusations of trying to smear Meghan, with one insider saying: ‘It is absolutely untrue that the Palace has been peddling disinformation or conducting any kind of campaign ahead of the interview.

‘The Palace has not got involved. It has clearly not been coming from us.’