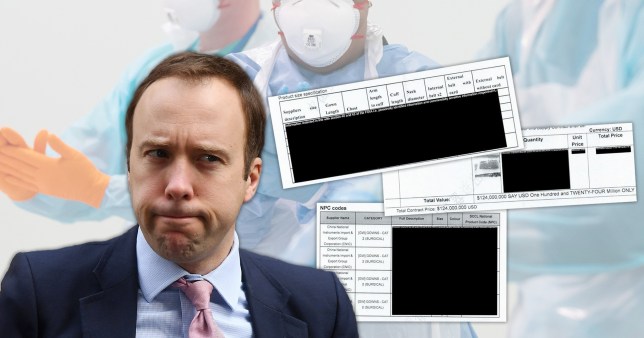 Matt Hancock has been embroiled in a transparency row over the publication of Government contracts for PPE intended for the health service (Picture: File image)

Campaigners have challenged Boris Johnson’s assertion that pandemic contracts have been openly published – pointing out the documents even hide the colour of surgical gowns.

The Prime Minister brushed aside repeated accusations of a lack of transparency yesterday after the Health Secretary was found to have acted unlawfully by not releasing Covid contracts within a 30-day deadline.

A legal campaign group has pointed out that while documents are being posted online, vast amounts of detail that would allow the public to assess whether the contractors delivered have been blacked out.

In one £98.7million PPE contract, the quantity, unit price, measurements and colour of gowns intended to protect NHS staff from Covid is redacted.

A black square has been imposed over a grid to hide details including the length, chest size and belt specification for the garments on the grounds that it is ‘personal’ and ‘commercially sensitive’ information.

Under the labelling and ‘instructions for use’ specifications, two entire boxes are blanked out. 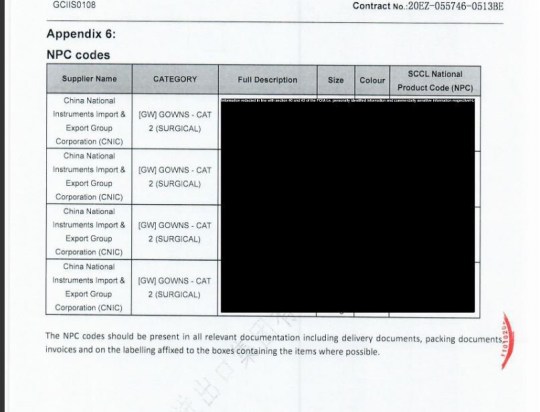 One of the heavily-redacted contracts for PPE gear that does not include basic information to assess the merits of the order (Picture: Department of Health)

The available information shows the contract began in June 2020 after the Department for Health and Social Care (DHSC) selected China National Instruments Import & Export Group Corporation to supply the gear.

It is one of several deals struck with the Beijing-based company as the Government scrambled to ensure rapid supplies of PPE for the health service amid the health crisis. Contracts with other suppliers follow a similar pattern of being heavily redacted.

The Good Law Project (GLP) argues that pricing information would not be sensitive on commercial grounds in normal times, let alone during the pandemic when fluctuations are unlikely to be repeated and there is public interest in seeing how vast sums of taxpayers’ money is spent.

Pressed about the contracts in Parliament yesterday, the Prime Minister said that ‘all of the details are on the record’ and the Government was ‘right to work as fast as we possibly could’.

Gemma Abbott, Legal Director at the GLP, told Metro.co.uk: ‘Johnson repeated ad nauseam that “all contracts are on the record” but many remain unpublished and those that have been published are heavily redacted.

‘It seems the Government has applied a blanket policy of removing pricing information, which makes it impossible to work out if contracts – many of which went to individuals linked to the Tory party – were value for money.

‘For whose benefit are they redacting prices? Certainly not the public’s.’

Mr Hancock acted unlawfully by failing to publish details of billions of pounds’ worth of contracts on time, the High Court ruled on Friday.

The decision followed the GLP taking legal action against the DHSC over its ‘wholesale failure’ to disclose the details.

The not-for-profit campaign group and three MPs – Labour’s Debbie Abrahams, the Green Party’s Caroline Lucas and Liberal Democrat Layla Moran – argued there had been a ‘dismal’ failure by the DHSC to comply with their contract obligations.

Their skeleton argument also said ‘the Claimants have very significant concerns about the blanket approach adopted by the Defendant to redaction of these contracts, which is contrary to the Government’s policy and to the public interest’.

On Saturday, Labour leader Keir Starmer told Metro.co.uk that he believed ‘cronyism’ had been at play in the allocation of the contracts to companies linked to the Conservative party.

This assertion is rejected by the Government and the Health Secretary.

The GLP has now invited Mr Hancock to agree to publish the names of all companies awarded public contracts under a fast-track ‘VIP lane’ and how much they were paid.

The project has also asked the Health Secretary to ‘commit to recovering public money from all the companies who failed to meet their contractual obligations’ and set up ‘a judge-led public inquiry into the handling of PPE procurement’. 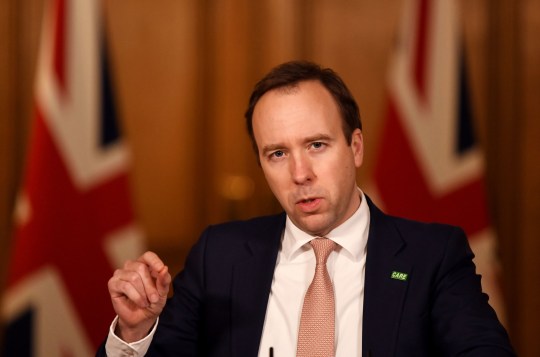 Matt Hancock has said his department prioritised getting vital stocks of PPE to the health service frontline amid the pandemic (Picture: PA)

Ms Lucas told Metro.co.uk: ‘This demands a public inquiry and that cannot wait until the Covid crisis is over. There are too many questions which ministers are currently refusing to answer with any honesty.’

Mr Hancock told Good Morning Britain yesterday that the paperwork was delayed by around a fortnight as his team raced to get PPE to the frontline.

The DHSC has said: ‘We have been working tirelessly to deliver what is needed to protect our health and social care staff throughout this pandemic, within very short timescales and against a background of unparalleled global demand. This has often meant having to award contracts at speed to secure the vital supplies required to protect NHS workers and the public.

‘As the 2020 NAO report recognised, all of the NHS providers audited were always able to get what they needed in time thanks to the effort of Government, NHS, Armed Forces, civil servants and industry who delivered over 8billion items of PPE to the frontline at record speed.

‘We fully recognise the importance of transparency in the award of public contracts and continue to publish information about contracts awarded as soon as possible.’

Covid vaccine news UK – Social distancing laws will be SCRAPPED and we must learn to live with virus, Matt Hancock says

Kris Jenner Is Set to Launch Her Own Beauty Brand