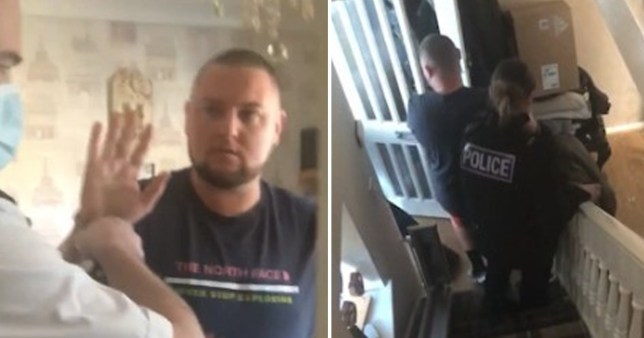 This is the moment police knock down the door of a sports coach who refused to quarantine in a hotel after returning from Bahrain.

Doorbell camera footage shows officers using a battering ram to smash their way into the house on Monday, before arresting Mathew Owens, 30.

Another clip, filmed by the football coach’s mum, shows officers breaking glass, entering the home, and demanding to know where ‘Martin’ is — appearing to forget his name.

Mrs Owens can be heard replying ‘he’s isolating’, and tells the officers: ‘You’re here to protect us. Are you standing under your oath?’

Eventually police arrest her son for breaching Covid regulations and take him away.

Mr Owens, 30, left Bahrain on Friday last week after working with one of the country’s premier league clubs.

One of his transfers was in Abu Dhabi — which is on the UK’s travel ‘red list’ — leading to concerns he would have to isolate in a hotel for 10 days as per the rules. 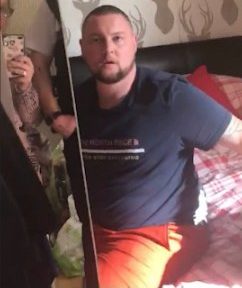 Mr Owens says he had chosen to self-isolate and had already sent off his first Covid test (Picture: Facebook/Andrea Owens) 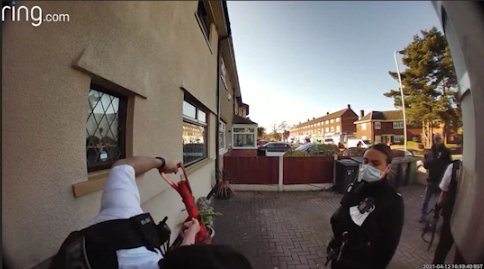 But when he phoned the British consulate in Bahrain, he claims he was told he would be ‘fine’ as long as he didn’t leave the airport during his hour-and-a-half layover.

But after stopping at Frankfurt International Airport and finally arriving in Manchester, Mr Owens claims UK border control said he would have to pay £1,750 to quarantine in a hotel in Birmingham — despite him living in Liverpool.

Earlier this year the Government was accused of ‘incompetence’ for not securing any quarantine facilities in the North of England.

Mr Owens says police insisted on escorting him to a coach to drive some 90 miles to the hotel, but he refused to sign a consent form agreeing to pay for his stay and for security contractors G4S to escort him.

He says he was threatened with a £10,000 fine for refusing to cooperate and he was detained at the airport for five hours until he was ‘forced’ onto the coach and taken to the Crowne Plaza in Birmingham city centre. 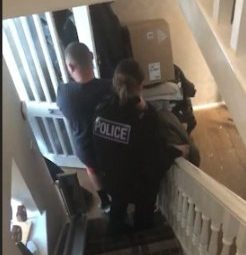 Mr Owen’s mum filmed from the top of the stairs, saying: ‘You’re here to protect us. Are you standing under your oath?’ (Picture: Facebook/Andrea Owens) 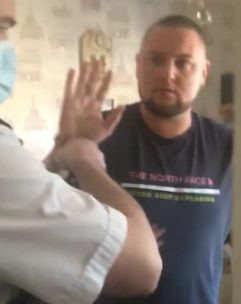 The sports coach was cautioned, arrested, given a Covid fine and then handed over to Border Force officials (Picture: Facebook/Andrea Owens)

Once there, Mr Owens handed staff the forms he refused to sign and used WhatsApp to contact his parents, who drove all the way from Bootle, Liverpool, to take him home on Saturday at 1.4am.

He claims his passport, phone and email address were used to check him in at the hotel without his knowledge.

After being taken into custody, Mr Owens is now in quarantine at the Crowne Plaza hotel.

He told MailOnline: ‘It makes no sense at all. If they were going to fine me, then so be it but what sense does it make to take me out of the controlled quarantined environment of my home, to mix with other people at the police station, and then to send me to Birmingham to mix with even more people.’

Mr Owens says police left his ‘disabled and vulnerable’ mum without a front door and says one of the officers cut himself forcing his way inside, ‘leaving blood on the wall and the floor’.

He told officers he was self-isolating and already sent off his first Covid test, which came back negative, but they insisted on him going to Birmingham.

The sports coach added: ‘What astonished me even more was that I wasn’t charged with anything. They literally broke into my house to hold me and pass me back to G4S.

‘It just makes zero sense to take me out of an isolated environment to a police station, then to the hotel. The whole thing is just ludicrous.’ 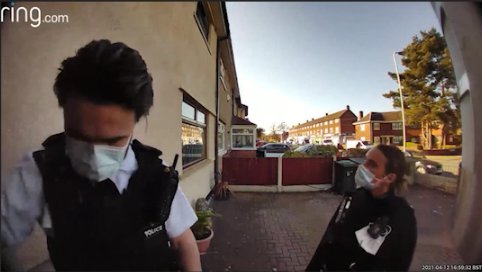 Mr Owens says police left his mum with a broken door and that one cut himself and left blood ‘on the wall and the floor’ (Picture: Facebook/Andrea Owens) 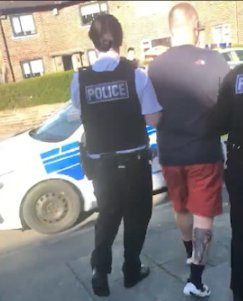 After his arrest, Mr Owens was taken back to the Crowne Plaza hotel in Birmingham to continue his quarantine (Picture: Facebook/Andrea Owens)

The force said he was cautioned, arrested for failing to isolate in a designated hotel, given a Covid fine, and then handed over to Border Force.

Chief Inspector Chris Barnes said: ‘The majority of people who have chosen to travel during the pandemic have accepted that they must quarantine upon their return to prevent the potential spread of the coronavirus and protect themselves and other people.

‘Merseyside Police has played its part in educating people about the Covid regulations and will continue to work with our partners to deal with those people who choose to flout the rules.’

Robert Webb addresses his past criticism of transgender charity Mermaids