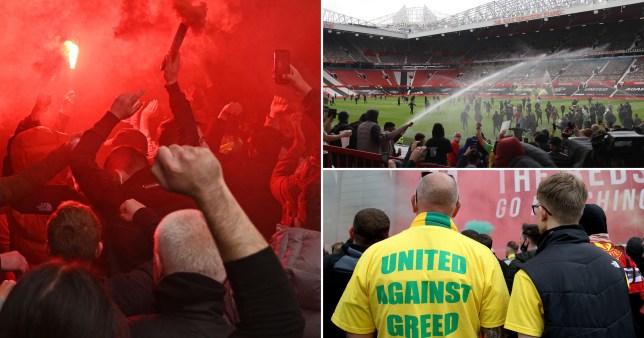 A man, 26, has been arrested in connection with the protests on Sunday (Picture: PA/Reuters/AFP)

A man, 26, has been arrested after six police officers were injured during a protest by Manchester United fans ahead of their match against Liverpool.

Around 100 fans broke into Old Trafford on Sunday afternoon to protest against the Glazer family’s ownership of the club. The demonstration then turned violent, with bottles, cans and barriers thrown at the police.

One officer sustained a fractured eye socket, another a facial wound, and a third was ‘dragged and kicked’ during the chaos, Greater Manchester Police (GMP) said.

The Force did not say what the man had been arrested on suspicion of, but noted that it was ‘reviewing all obtainable evidence’ to identify the organisers of the protest and those responsible for assaulting officers.

‘Officers were just trying to do their job and facilitate a peaceful protest, however a number of those present became hostile and aggressive towards officers and forced entry to the football grounds, making it very clear that this protest was not peaceful and ruining it for the majority of protesters who had not intended for the protest to become violent.’ 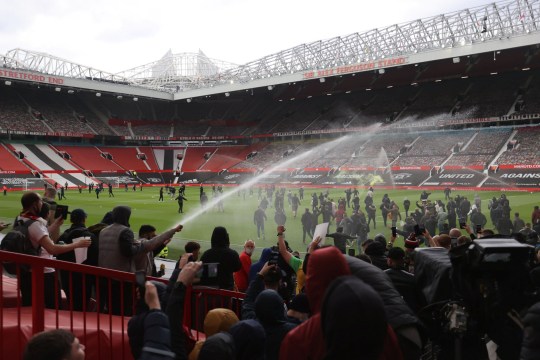 One officer sustained a fractured eye socket in the protest, and another a facial wound (Picture: Reuters) 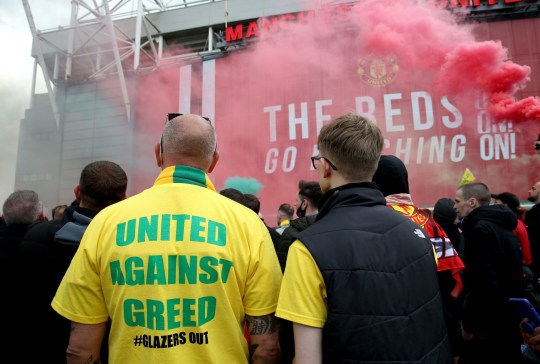 They were protesting against the Glazer family’s ownership of the club (Picture: PA)

Earlier today GMP told how one officer who was slashed in the face was lucky he didn’t lose sight in his eye. The injured officer, who is a police constable with around 20 years’ service, remains in a lot of pain and is currently off work.

‘This is not right. Police officers are mothers, fathers, husbands, wives and partners. They are sons and daughters. They are human beings who should be able to go home to their families in one piece at the end of their shifts. Not be rushed to hospital.

‘We are offering support to our injured colleague and will continue to do so as he recovers from his injuries.’ 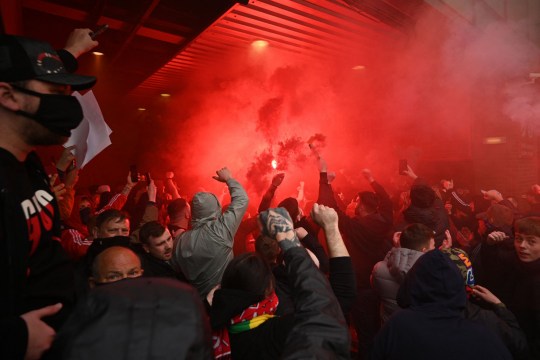 It is not clear what the man has been arrested on suspicion of (Picture: Getty Images)

Mr Berry also said he had spoken to Acting Chief Constable Ian Pilling expressing the Federation’s concerns about the injury to the officer and another colleague, and seeking reassurance that in future staff will be adequately protected.

He added: ‘Nothing is more important that the safety of our police officers. We are incredibly experienced in Greater Manchester Police at facilitating peaceful protest but lessons from Old Trafford must be learned.

‘I am pleased to say I have a commitment from Acting Chief Constable Ian Pilling to fully review intelligence received and resources allocated around yesterday’s incident – and we wait for the outcome of that review.’

Rudy Giuliani on FBI search: ‘Only lawyers for Donald Trump’ get raids